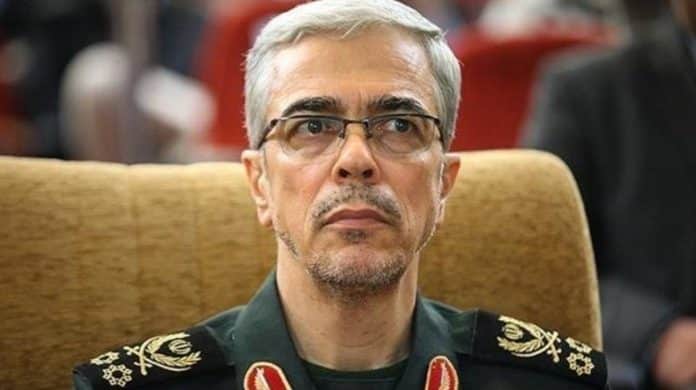 The top Iranian general says the IRGC’s Monday missile and drone attacks on terrorists’ positions in Syria were just the first stage of Tehran’s retaliation against those who sponsored and orchestrated a recent raid on a military parade in Iran’s Ahvaz, which killed 25 and wounded over 400 people.

Chief of Staff of the Iranian Armed Forces Major General Mohammad Baqeri made the remarks on Monday, hours after the Islamic Revolution Guards Corps (IRGC) said it had targeted terrorist positions to the east of the river Euphrates, near Albu Kamal town on Syria’s eastern border with Iraq.

General Baqeri also vowed that “there will be other stages of revenge as well.”

He further noted that the missiles and drones flew long distances before hitting the terrorists’ hideouts in Syria. “Several high-profile terrorists were killed during the attacks,” he added.

“It [the attack] showed the security of Iranian people is a red line for the Leader, the Armed Forces, and the country’s ruling system,” Baqeri noted, vowing that such attack would not happen again thanks to the measures adopted after the recent attacks.

A senior IRGC commander says the missile strike against the positions of terrorists shows the Iranian nation’s security is a red line.

Earlier, the commander of the IRGC Aerospace Division of also said the nation’s security is a red line. Brigadier General Amir Ali Hajizadeh added, Iran will not take a step back in the face of threats against its security.

Iran’s IRGC says the terrorists behind the Ahvaz bloody attack will face deadly and unforgettable vengeance in the near future.

The Iranian Islamic Revolutionary Guard Corps (IRGC) says it has hit the ringleaders responsible for a terrorist attack on a military parade in Ahvaz on September 22, which killed 30 people and injured over 60.

In a statement published by its own outlet Sepah, the IRGC said its Aerospace Division targeted the “headquarters of the terrorists” east of the Euphrates in Syria. The statement was accompanied by photos of surface-to-surface missiles being launched. It claims that “a large number” of the terrorists were hit.

Before the IRGC announced the attack, videos were posted on social media purporting to show the moment of the launch. Some users said there were a total of eight missiles fired, and that two of them crashed shortly after being fired.