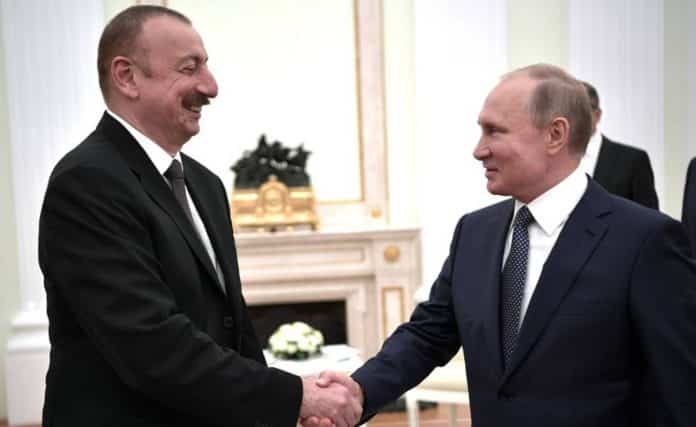 On September 28, 2018 Russia’s Pravda news outlet published a story titled; “Putin in Azerbaijan: Israel will have to leave Moscow’s Sphere of Influence.”

The story itself was sketchy on details of the exchange.

“Russian President Vladimir Putin came to Baku to participate in the Russian-Azerbaijani interregional forum. Putin will also attend the final stage of the World Judo Championship. However, behind closed doors, Putin and his Azerbaijani counterpart Ilham Aliyev also discussed topics of military-technical cooperation, the CSTO, as well as issues of the settlement of the Nagorno Karabakh conflict.

The Kremlin watched closely the recent visit of Israeli Defense Minister Avigdor Lieberman to Azerbaijan. Lieberman promised to supply state-of-the-art air defense systems to Azerbaijan to build an echeloned defense system on the border with Armenia. In addition, Azerbaijan will continue purchasing unmanned aerial vehicles from Israel, after they proved to be highly effective in the course of hostilities in the zone of the Armenian-Azerbaijani conflict in April 2016.

Naturally, Moscow wants to seize the initiative from Israel, especially after the shootdown of the Ilyushin Il-20 aircraft over Syria. The Kremlin would not want Azerbaijan – a key country in Transcaucasia – to cooperate closely with Israel.”

In the aftermath of the September 2018 downing of a Russian IL 20 aircraft and Israel’s continued belligerence and denials of responsibility, it was clear Vladimir Putin would have to act assertively.

The incident became even more serious when Israel’s Haaretz newspaper broke a story that claimed high level Israeli military officers had seen Russia’s fairness toward Israel and her position on Hezbollah and Iran inside Syria as a “sign of weakness” leading to aggressive action toward Moscow.

This may well have been the straw that broke the camel’s back.

As a matter of fact, in its 200 plus air missions inside Syria during 2018, Israel has misused its agreement with Russia, time and time again, to attack Syrian Arab Army positions in order to support ISIS attacks or to allow ISIS leaders to escape from “pincer” moves by Syria’s military.

Israel’s interests in Azerbaijan date back to 2009 and before when Israel began establishing a covert military presence there to carry on attacks on Iran. This relationship was discovered after a 2010 expose’ by Veterans Today and the defection of two Azeri military officers in 2011 adding confirmation. From Reuters in 2011:

“Where planes would fly from – from here, from there to where? That’s what’s being planned now,” a security consultant with contacts at Azeri defense Headquarters in Baku said. “The Israelis…would like to gain access to bases in Azerbaijan.”

An earlier Reuters story provided more background to the alleged “combined project” between Azerbaijan and Israel. It is likely that Russia’s memory of these events are a factor in current moves by Putin to limit Israeli military action in the region. From Reuters (September 30, 2012):

“Baku (Reuters) – Israel’s “Go-it-alone” option to attack Iran’s nuclear sites has set the Middle East on edge and unsettled its main ally at the height of a US Presidential Election Campaign.

Prime Minister Benjamin Netanyahu exudes impatience, saying Tehran is barely a year from a “Red Line” for atomic capacity. Many fellow Israelis, however, fear a unilateral strike, lacking US forces, would fail against such a large and distant enemy. But what if, even without Washington, Israel was not alone?

Azerbaijan, the oil-rich ex-Soviet Republic on Iran’s far northern border, has, say local sources with knowledge of its military policy, explored with Israel how Azeri air bases and spy drones might help Israeli jets pull off a long-range attack.”

By 2012, Azerbaijan had sought to expel Israel’s military from their country. Their announcement to this effect, while not openly admitting Israel’s bases, was intended to assure both Tehran and Moscow that Israeli moves against Iran and Armenia from Azerbaijan would not be allowed. From Press TV, October 2, 2012:

“Azerbaijan has been following a policy of non-interference in the (internal) affairs of other countries,” Baku’s ambassador to Pakistan Dashgin Shikrov said in an exclusive interview with the Pakistani Daily, The Newson Monday.

The ambassador strongly rejected rumors in the Western media outlets about his country’s readiness for providing Israel ground facilities for attacking Iran’s nuclear sites. “Azerbaijan is a member of the Organization of Islamic Cooperation (OIC) and nobody should have any doubt that it will not permit the use of its territory for committing acts of aggression against another OIC member,” the ambassador added.

Israel has recently stepped up threats of carrying out a strike against Iran’s nuclear energy facilities. The threats are based on the unfounded claims that the peaceful nuclear activities of the Islamic Republic include a military component.

Iranian officials have refuted the allegation and have promised a crushing response to any military strike against the country, warning that any such measure could result in a war that would spread beyond the Middle East.”

Despite assurances, however, it seems Israel had chosen to establish air bases in the Nakhchivian Autonomous Republic, a region under only nominal control by Azerbaijan’s government in Baku. From Baku Daily, September 18, 2014:

“An Israeli spy drone which Iran recently downed on its way to one of the Iranian nuclear sites had taken off from an air base in Azerbaijan’s Nakhchivan Autonomous Republic, Press TV reported, citing unnamed sources.

The sources said the Hermes drone, which was taken down by Iran’s Islamic Revolution Guards Corps (IRGC) forces on August 23 after 300 kilometers of flight, was bound for the Natanz enrichment facility in central Iran.

The stealth spy drone was targeted by a surface-to-air missile before it reached the strategic location.

Iran’s nuclear facilities have been a regular target for espionage activities by US and Israeli secret services, which have at times used drones for this purpose.

However, all efforts made to this end have been successfully thwarted by the Iranian military forces.

Azerbaijan’s Defense Ministry last month denied allegations that the drone took off from Nakhchivan. Officials in Baku have repeatedly said no country will be allowed to use Azerbaijani territory or airspace against Iran.”

Further evidence of Israeli involvement, not just against Iran but Armenia as well comes from this report by Jared Keller of Task and Purpose, quoting an October 2017 article from the Times of Israel:

“An Israeli drone maker apparently attempted to bomb Armenian military personnel with “one of its unmanned kamikaze aerial vehicles” back in October 2017, the Times of Israel reported on Wednesday. According to the leaked complaint with the Israeli Defense Ministry, drone manufacturer Aeronautics Defense Systems’ Orbiter 1K suicide drone was dispatched to the disputed Nagorno-Karabakh region “at the request of Azerbaijani clients during a sales demonstration.”

Here are the technical details, per Joseph Trevithick at The War Zone:

Aeronautics employees reportedly refused to carry out the 2017 mission and company executives subsequently stepped in to fly the drone themselves. Though it’s not clear if this was deliberate or not, the drone reportedly missed the target, only injuring two ethnic Armenian fighters.

It could very well be that the executives made this decision consciously since Orbiter 1K has a so-called man-in-the-loop guidance system  whereby the operator is either actively flying or otherwise monitoring the video feeds from the drone and they can see what it sees throughout the mission.

‘The Israeli government has permitted private defense companies to demonstrate their wares in actual combat,” he writes, “but this is rare and is unlikely to have occurred in this case, since Israel does not view Armenia as an enemy.”

However, in 2010, Israel began transiting munitions from the Black Sea port of Poti in the Republic of Georgia to Azerbaijan, brought in by the controversial visit of the USS Grapple accompanied by Israeli patrol craft.

Reports from sources on the ground in Georgia, confirmed by Jeffrey Silverman of Veterans Today in Tbilisi, tell of a convoy of heavy munitions transiting ground routes toward Azerbaijan, guarded by Israeli security and American private military contractors working for Bechtel Corporation and British Petroleum.

What has become clear is that Russia is beginning to recognize Israeli actions on her border as a deeper threat than previously noted. Exacerbating the issue is the Trump administration’s willingness to back any Israeli military moves, something President Obama totally refused.

Adding Trump to the mix has empowered extremists within the Israeli military, if the Israeli press is to be believed, taking a clear side against Russia believing that American military power can mitigate any potential downside for Israel. If Israel’s assessment of President Putin as “weak and indecisive” turns out wrong, as most analysts know quite well, events are likely to turn against Israel.