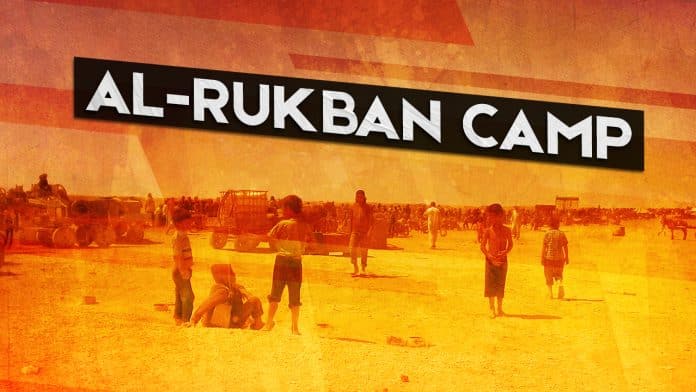 The Damascus government and representatives of tribal leaders from the al-Rukban refugee camp located in the US-occupied area of at-Tanf have reached a preliminary agreement to deal with the humanitarian crisis there.

Under the agreement, the local leaders of the al-Rukban camp will hand over a list of people who want to reconcile with the government. Another part will be allowed to withdraw to the Turkish-backed opposition-held areas in northern Aleppo. Damascus will also evacuate 150 ill civilians to government hospitals.

The humanitarian crisis in al-Rukban has been caused by the so-called 50km security zone imposed by the US near at-Tanf. The US-led coalition prevented deliveries of humanitarian aid to the area and repeatedly struck pro-government troops attempting to enter the area to re-establish security there.

The Syrian side has repeatedly accused the US-led coalition of using the At-Tanf area to train and equip former ISIS members, who are then being used in attacks against government forces.

According to the Russian government, at-Tanf has become a rear base units of the terrorist groups, al-Qaeda-linked organizations and event ISIS, defeated in other parts of Syria and these units have carried out several operations from there.

The US-led coalition rejects all these accusations claiming that its at-Tanf garrison is needed to combat ISIS in Syria.

112 Russian servicemembers have died since the start of the military operation in Syria in 2015, Viktor Bondarev, the chairman of the Russian parliament’s upper house Defense and Security Committee, stated on September 30. He added that most of the casualties was suffered as a result of the incidents with An-26 and Il-20 planes. According to Bondarev, the Russian military lost 8 planes, 7 helicopters and “maybe” 1-2 BTR and other armoured vehicles.

On September 28, Russian Foreign Minister Sergey Lavrov said that the announced delivery of S-300 systems to the Syrian military has already started.

“The delivery has been started already. And as President Putin said, after that incident […] the measures which we will take will be devoted to ensure 100 percent safety and security of our men in Syria,” the diplomat said at a press conference following his speech at the UN General Assembly.

The delivery of S-300 systems, which according to Moscow was caused by “hostile actions” by Israel, became one of the key developments of late September and early October.

Commenting on the situation, Syria’s Foreign Minister Walid Muallem event stated that Syria is “also hoping” to acquire a much more modern S-400 air defense system from Russia. However, this delivery remains very unlikely if no groundbreaking incidents between Russia and some regional actors take place.

Despite claims by the US-led coalition and the SDF that Raqqa is under their full control, the recent developments, including a series of terrorist attacks in the area, show that ISIS cells still actively operate there.

49 ISIS members were killed and 4 vehicles were destroyed in the ongoing SDF advance on the towns of Hajin and al-Susah in the province of Deir Ezzor, according to the SDF. The Hajin pocket is the last major ISIS stronghold in Syria. If it’s eliminated, the SDF and the US-led coalition will finally be able to declare the eastern bank of the Euphrates cleared from the terrorist group at least officially.