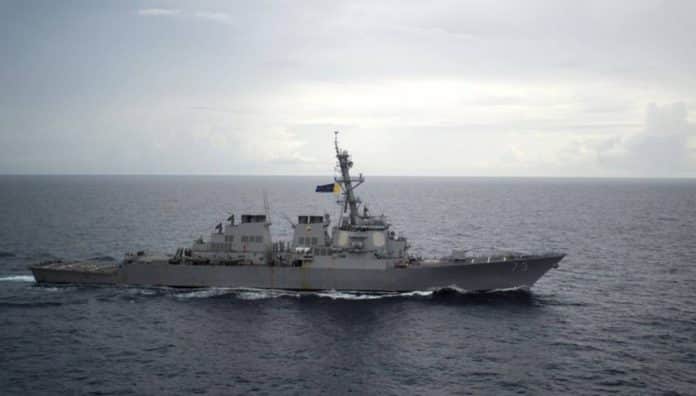 Editor’s note:  Story is as reported by Russia Today.

A Chinese destroyer sent to escort the USS Decatur on a ‘freedom of navigation’ sail-by in the disputed South China Sea has come dangerously close and forced the US vessel to maneuver to “prevent collision,” the US Navy said.

The encounter between the US and Chinese Navies unfolded on Sunday morning when Arleigh Burke-class destroyer, sailing under the ‘freedom of navigation’ principle, approached close to one of the Gaven Reefs in the Tizard Bank of the Spratly Islands in the South China Sea. In response, China dispatched a Luyang-class destroyer to escort the American warship away from the disputed area, allegedly behaving in an “unsafe and unprofessional” manner, according to the US version of events.

The Chinese destroyer conducted “a series of increasingly aggressive maneuvers accompanied by warnings for Decatur to depart the area,” Captain Charlie Brown, a US Pacific Fleet Spokesman, said Monday. “The PRC destroyer approached within 45 yards of Decatur’s bow, after which Decatur maneuvered to prevent a collision.” 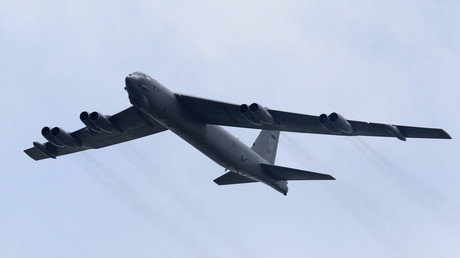 
China’s Defense Ministry slammed the US for abusing the ‘freedom of navigation’ principle to deliberately violate Chinese sovereignty, and noted that it was forced to activate its navy and warn the US destroyer to leave the area. “The Chinese military will firmly perform its defense duties and continue to take all necessary measures to resolutely defend the sovereignty of the country and firmly safeguard regional peace and stability,” the statement reads.

In a separate statement, Chinese Foreign Ministry also criticized US actions, stressing that the latest American intrusion seriously damages the Sino-US ties. “We strongly urge the US to immediately correct its mistakes and stop such provocative actions so as not to damage Sino-US relations,” the statement said. “China will take all necessary measures to defend national sovereignty and security.”

While Beijing repeatedly claimed the right to protect its interests and territorial claims in the South China Sea and slammed the abuse of the ‘freedom of navigation’ principle, the Pacific Fleet vowed to continue sailing close to disputed waters.

“US Navy ships and aircraft operate throughout the Indo-Pacific routinely, including in the South China Sea,” said Brown. “As we have for decades, our forces will continue to fly, sail and operate anywhere international law allows.”

Last Thursday China’s Defense Ministry also slammed Washington’s flyover of B-52 long-range, strategic bombers over the South China Sea, calling the display of force nothing short of “provocative.” The showcase of US air power coincided with the integrated Defense of the Amphibious Task Force (DATF) drill held by the US Navy in the South China Sea on September 27.

In addition, last week the B-52s also participated in a US-Japan joint military exercise in the East China Sea, where Tokyo and Beijing both claim sovereignty over the group of uninhabited Senkaku/Diaoyu Islands. Washington recognizes the islands as part of Japan and has the obligation to protect them under the mutual defense agreement with Tokyo.

#B52 Stratofortress bomber aircraft conducted operations in the South China Sea and Indian Ocean on Sept. 23 and Sept. 25, 2018 (HST) @PacificCommand@usairforce@AndersenAFBGuamhttps://t.co/xeAcPf1cZBpic.twitter.com/kMMO2GFgzD

The American disregard of China’s claims over the disputed waters, through which trillions of trade passes through annually, comes amid unprecedented tensions between the world’s largest economies. Just days before tit-for-tat tariffs targeting $260 billion worth of bilaterally exchanged goods came into effect on September 24, Washington imposed sanctions on the Chinese military for buying Russian fighter jets and missiles. Beijing, in turn, urged Washington to either reconsider the move or prepare to bear “consequences.”

‘Remedy the mistake or bear the consequences’: China hits back at US over sanctions on military