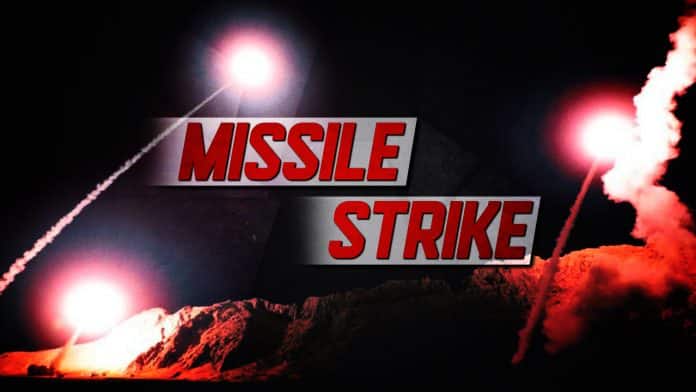 Early on October 1, the Aerospace Division of the Iranian Islamic Revolution Guards Corps (IRGC) carried out a ballistic missile strike on ISIS targets in Syria’s Euphrates Valley. The IRGC launched at least six ballistic missiles, which, according to the IRGC, killed and injured a large number of terrorists in the area near al-Bukamal.

The Iranian media added that the missiles employed belonged to the Qiam and Zolfaghar families. One of the missiles shown by the media bore the slogans “Death to America, Death to Israel, Death to Al Saud” and the phrase “kill the friends of Satan”.

Following the missile strikes, the IRGC employed at least seven unmanned combat aerial vehicles to further pound what it described as the HQs and gatherings of the “mercenaries of global arrogance”. The UCAVs, which were used, seem to be the Thunderbolt type, which was developed thanks to a reverse-engineering of the US-made RQ-170 UAV.

The October 1 strike was described as a response to the terrorist attack, which had targeted a military parade in the Iranian city of Ahvaz on September 22. At least 25 people were killed and 65 others were injured in the attack claimed by ISIS. However, the Iranian leadership has gradually accused the US, Israel, Saudi Arabia and the UAE of being, at least indirectly, behind the attack.

Commenting on the missile strike, Chief of Staff of the Iranian Armed Forces Major General Mohammad Baqeri stated that it was just the first stage of the response to the Ahvaz attack vowing that “there will be other stages of revenge as well.”

It’s interesting to note that the Iranian attack took place close to the area, from which ISIS had allegedly been cleared by the US-backed Syrian Democratic Forces (SDF). The SDF kicked off its advance on ISIS positions in the Hajin pocket about 3 weeks ago. However, so far, the SDF has achieved only limited gains in the area, even according to its own statements.

On October 1, Kremlin spokesman Dmitry Peskov said that Russia will continue to fight terrorism in Syria. “The fight against terrorist organizations in Syria goes on, and we should continue this fight,” he stated that Moscow’s position on “the illegitimate presence of foreign troops and foreign armed forces in Syria” remains clear.

Meanwhile, additional details appeared on the shape of the upgraded Syrian air defense system after the delivery of S-300. Viktor Bondarev, the chairman of the Russian parliament’s upper house Defense and Security Committee stated that the air defense system will be fully centralized. This would allow coordination between Syrian and Russian means and facilities in the war-torn country to be increased.