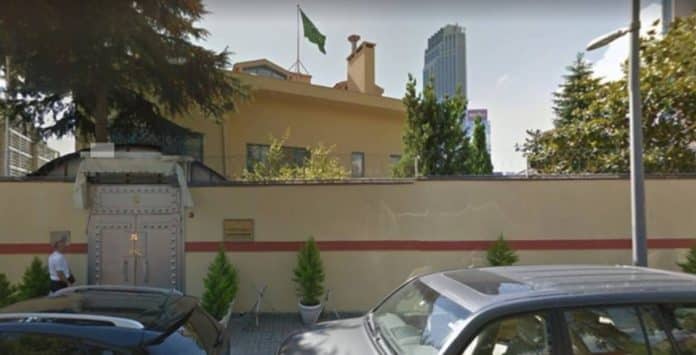 Jamal Khashoggi, a prominent Saudi journalist and Washington Post columnist who has previously criticized the kingdom’s leadership, disappeared after visiting the Saudi Consulate in Istanbul Tuesday, according to multiple reports.

According to his fiancee, who asked to remain anonymous, the 59-year-old journalist entered the consulate at about 1 p.m. and did not exit at 5 p.m. after the consulate had officially closed. By midnight, there was still no sign of the veteran journalist, according to Turan Kislakci, a friend of Khashoggi’s who was also waiting outside the consulate with Khashoggi’s fiancee.

“He entered at 1 p.m. and hasn’t surfaced since then. I have no media statements to make at this point, but I have contacted Turkish authorities for help,” Khashoggi’s fiancee told the Middle East Eye by phone Tuesday.

“We have talked with some Turkish authorities and the police,” Kislakci told the Washington Post Tuesday. “I think 100 percent that he is inside.”

After making comments last year at the Washington Institute for Near Eastern Policy that Saudi Arabia should be “rightfully nervous about a Trump presidency” last year, Saudi Arabian authorities told Khashoggi, a Saudi national, that he could no longer write or tweet.

Khashoggi, who presently writes for the Post’s Global Opinions section, decided at the time to voluntarily leave Saudi Arabia following the crackdown over his content. He moved to the US capital last year over concerns that he would be arrested or prevented from leaving the country.

Over the last year, Khashoggi has criticized the policies of Saudi Arabia’s crown prince, Mohammed bin Salman, particularly his arrest of any dissidents.
When Saudi authorities arrested at least a dozen women rights activists in May, Khashoggi noted that the “crackdown has shocked even the government’s most stalwart defenders.” In an article published by the Post last month, Khashoggi also urged Saudi Arabia to use “its clout and leverage” to end the war in Yemen.

Khashoggi, who is a former editor-in-chief of Saudi newspapers al-Arab and Watan, was at the Saudi Consulate in Istanbul Tuesday to acquire documents related to a marriage license. According to friends, he had visited the consulate earlier on Friday with no incident. He returned to Istanbul on Monday after traveling to London and called the consulate Tuesday morning; he was told to visit at 1 p.m.

Both the Turkish and Saudi foreign ministries have not responded to messages from the Washington Post inquiring about Khashoggi’s whereabouts.

“We have been unable to reach Jamal today and are very concerned about where he may be,” the Post’s international opinions editor, Eli Lopez, wrote in a statement Tuesday.

“We are monitoring the situation closely, trying to gather more information. It would be unfair and outrageous if he has been detained for his work as a journalist and commentator. Jamal is a great writer and insightful political observer, deeply committed to the open exchange of ideas; we are honored to have his point of view be part of our Global Opinions. We hope that he is safe and that we can hear from him soon,” Lopez added.

The US State Department also told the Middle East Eye through email that it is aware of Khashoggi’s disappearance.

“We have seen these reports and are seeking more information at this time,” a US official said.

According to reports by The New Arab and Al-Jazeera, Turkish police are already investigating Khashoggi’s disappearance. Security forces allegedly entered the Saudi consulate on Tuesday to search for him.

“Police entered the consulate building in the Besiktas area but failed to find him,” a local Al-Jazeera correspondent reported Tuesday.

“Police inspected footage taken by surveillance cameras, showing that Khashoggi left the building 20 minutes after entering,” the report added, also stating that the journalist was most likely “kidnapped.”

On Tuesday, Saudi Arabia’s official SPA news agency reported that an unidentified Saudi national was arrested and extradited to Saudi Arabia for cashing checks without credit. However, it is unclear whom the statement is referring to.