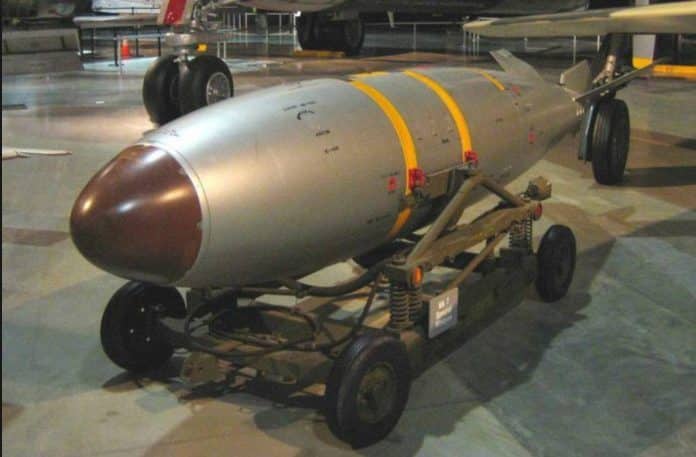 They currently have more including a squadron of US built aircraft modified by Israel to deliver nuclear weapons.  Our sources include direct access to classified records of the International Atomic Energy Agency and have been broadly confirmed.

US lawmakers have warned that Saudi Arabia’s pursuit of nuclear capabilities has the potential to evolve into an “arms race” in the Middle East.

If passed, the legislation would make President Donald Trump’s National Security Council submit a report to Congress within 180 days to assess the “national security interests of the United States and regional allies, including Israel, of Saudi Arabia obtaining nuclear fuel enrichment capabilities through a commercial sale.”The Israeli Haaretz newspaper cited Schneider as saying that he feared “there is a dismissive approach within the administration on the real significant concerns this could create to some of our allies in the region.”

He further explained that the introduction of the legislation was motivated by the fact that “this issue deserves more attention than it is currently receiving.”

The Representative for Illinois’s 10th congressional district, however, stated that the move shouldn’t be perceived as a hostile step towards the kingdom, which remains a US key ally in the turbulent region.

“We need to separate between these two things. Fighting Iran’s regional aggression is important and, on that issue, Saudi Arabia is one of the allies we are working with. We need to get Iran out of Syria and block their plans for a land bridge. But we also need to be aware of the risk of a nuclear arms race.”

The report that the congressmen expect to see from the Trump administration should handle a wide array of concerns, including the way the US would be able to confirm that Saudi Arabia would maintain the civilian nature of its nuclear plan, as well what kind of security measures Riyadh would take to guarantee that its technology doesn’t fall into the wrong hands.

Meanwhile, Meadows, who serves as Representative for North Carolina’s 11th congressional district, noted that “when terrorist organizations have demonstrated an interest in obtaining nuclear fissile material, and when our ally Israel and other states in the region have long-standing tensions, our government must be cautious and informed about the implications of a nuclear transfer to any state in the Middle East.”Saudi Arabia has been seeking to develop its nuclear energy capabilities as part of Crown Prince Mohammed bin Salman’s plan to reduce the economy’s dependence on oil.  The kingdom declared its intention to build 16 nuclear reactors over the next few years for peaceful purposes – mainly to diversify its energy sources and meet growing energy needs.

Even though Riyadh stated that the project’s nature was peaceful, Prince Salman told CBS in March that if Iran developed a nuclear weapon, Saudi Arabia would follow suit “as soon as possible.”