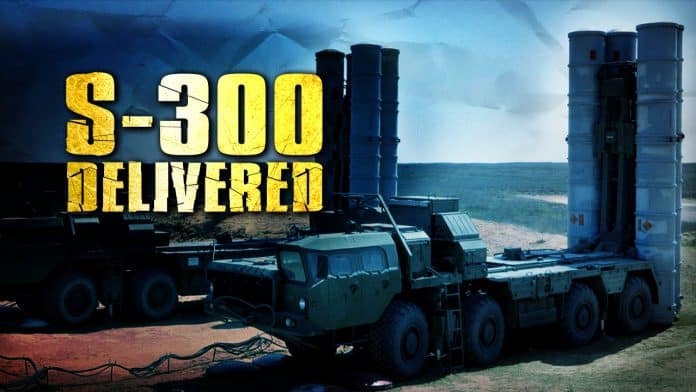 A S-300 air defense system and dozens pieces of additional military equipment have been delivered to Syria, Russian Defense Minister Sergei Shoigu reported to President Vladimir Putin on October 2. According to Shoigu, the supplied equipment includes four S-300 launchers, radars and control vehicles. The defense minister pointed out that the training of Syrian S-300 crews will take about 3 months.

An integrated air defense network is set to be established in the war-torn country by October 20. Russia is already delivering equipment and training Syrian servicemen for this purpose. Shoigu pointed out that the defense ministry had also boosted the electronic warfare capabilities of the Russian forces deployed in Syria. Russian forces are monitoring the main directions from which strikes on Syria have been carried out within the range of up 200km.

US-led coalition spokesman Colonel Sean Ryan stated that the S-300 delivery has had no impact on the US forces deployed so far. “It hasn’t changed anything,” Ryan stated adding that the coalition is going to use the existing de-confliction mechanism to prevent possible incidents.

However, there is a side directly affected – Israel. The Israeli leadership has stated that the Israeli military will continue its strikes on Syria even despite the delivery of the S-300 systems to Syria and even threatened to destroy the supplied systems. So, now many are looking forward to see how the Israeli Air Force will deal with the boosted capabilities of the Syrian Air Defense Forces.

Important developments are ongoing in the provinces of Idlib and Aleppo controlled by Turkey-led forces.

On September 27, Jaysh al-Islam leader Essam al-Buwaydhani confirmed that the group, which fled the Damascus suburb of Eastern Ghouta to northern Aleppo, has joined the Turkish-backed Syrian National Army (SNA).

Currently, Jaish al-Islam is re-organizing and re-arming in order to continue its operations with Turkish support. The group, with help of some mysterious local businessmen, is now building a new town with about 1,400 houses, a clinic, a school and a mosque in the area 15km north of al-Bab.

Essam al-Buwaydhani also claimed that the toppling of the Damascus government is still the group’s priority. “It is not impossible that Assad falls, especially given that the opposition forces are gathered today in one place,” al-Buwaydhani told Reuters.

In early October, reports also appeared Hayat Tahrir al-Sham (formerly Jabhat al-Nusra, the Syrian branch of al-Qaeda) has reached a deal with Turkey and is going to re-organize its forces into three new armies under different brands. If confirmed, this will be another attempt to hide the essence of the terrorists operating in Idlib.

On October 2, US Defense Secretary James Mattis stated that US troops have started training their Turkish counterparts for joint patrols around the town of Manbij.

“The training now is under way and we’ll just have to see how that goes,” he stated adding that the US has “every reason to believe the joint patrols will be coming on time”.

According to the Defense Secretary, the training, which is now ongoing on Turkish soil, had been delayed while equipment was brought in and the two countries worked out the instruction.

Just on September 28, Turkish President Recep Tayyip Erdogan stated that the US did not comply with its responsibilities in the framework of the Turkish-US deal on the Syrian town of Manbij.

“The United States certainly did not comply with the agreed calendar of the Manbij roadmap; YPG did not exit the area. The real owners of the region are not settled in yet,” Erdogan stated emphasizing that “The United States did not keep their promise here.”

Most likely, the US decision to renew steps to implement the Manbij deal in order to avoid further tensions with Turkey, which remains one of the key powers involved in the Syrian conflict. In turn, Ankara seeks to kick off Turkish-US patrols around Manbij itself and to wipe out all YPG-affiliated military and political structures from the town. If this is done, it will be another example how the Erdogan government is actively working to exploit the differences between the US-Israeli-led bloc and the Syrian-Iranian-Russian alliance to pursue its own political and security goals in the region.