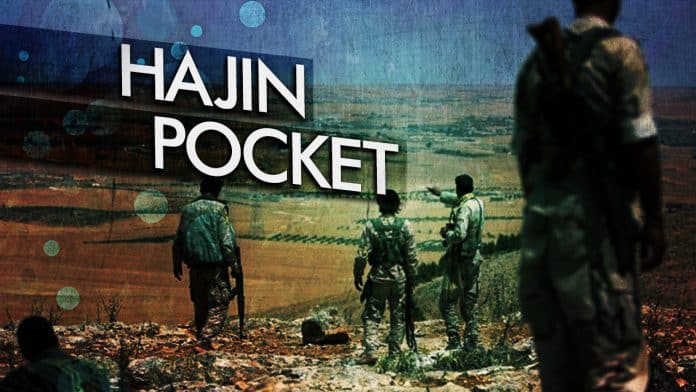 Clashes between ISIS and the Syrian Democratic Forces (SDF), backed up by the US-led coalition, are ongoing in the area of Hajin in the province of Deir Ezzor.

According to pro-SDF sources, during the last week of the clashes, the SDF killed up to 100 ISIS members and destroyed up to dozen of vehicles belonging to the terrorist group. However, at the same time, it appears that the SDF achieved limited gains on the ground.

On October 3, the SDF captured about 10 positions near the ISIS-held town of Hajin and expanded a buffer zone near the recently captured town of al-Baghuz al-Fawqani. SDF units also advanced on al-Susah, but were not able to break the ISIS defense there.

On October 4, the US-backed group repelled an ISIS counter-attack near al-Baghuz al-Fawqani and continued advance on al-Susah.

The SDF operations were actively supported by aircraft and artillery of the US-led coalition, which delivered up to 40 strikes on ISIS targets.

A representative of Horas al-Din, Abu Rayan al-Ma’sadah, criticized his group’s counterparts for this move slamming their alleged attempts to support the Turkish-Russian deconfliction agreement on Idlib.

Previously reports appeared about a rift between the radical and relatively moderate parts of Hayat Tahrir al-Sham on the Idlib demilitarization zone agreement. While the radical side seeks an open military confrontation with the Syrian Army, the moderate faction is ready to obey to the Russian-Turkish deal if it gives the group an opportunity to keep influence in the province.

As the day of the formal establishment of the Idlib demilitarization zone comes closer, the rift between different Idlib militant groups and factions within them will likely grow further.