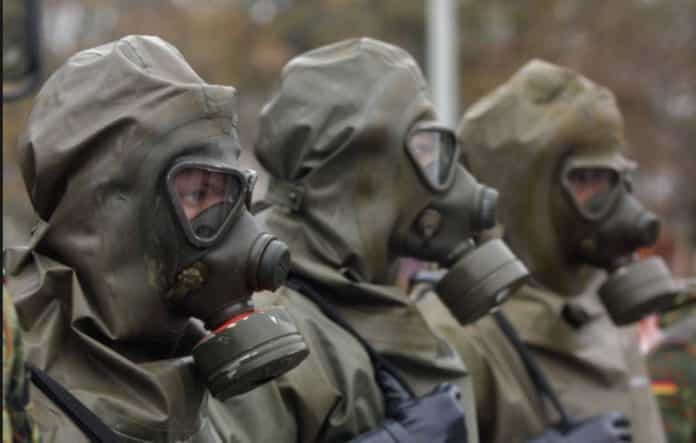 By Gordon Duff with Jeffrey Silverman, Somewhere in the Region

Only now is the MSM covering a story which broke 7 years ago, that the US had built a series of interlocking biological and chemical weapons research and production facilities, one in Tbilisi, Georgia. These centers have leaked bio-weapons into local towns, killing dozens, and are responsible for epidemics in Russia, Turkey, Iran and Sarin gas attacks inside Syria.

The evidence is overwhelming, documents, samples of biological agents, testimony from workers at the facility, much of it televised years ago and reported time and time again but blocked from American media and laundered off Facebook and the Google/Net.

Russia has started to make a loud noise about Lugar laboratory; why this issue has not been raised earlier; why Russia did not prevent the construction of the laboratory?

Now Russia has REAL documents and its intelligence services, GRU, (military intelligence) and FSB, are working overtime. I am sure they have recorded much of what goes on there and from those who spend their time chatting after work, I mean foreigners. Until now it had many informed suspicions, but was not able to access so many compromising documents as it now has in its hands.

In addition, Russian media has interviewed many of the victims of American biological projects in Georgia and is making a case to present before the international community, especially in terms of how Georgia and the US are in violation of the Biological Weapons Treaty.

Some foreign contract workers died of poison gas in Georgia, and this same gas was linked to the gas attack in Syria, the one that was blamed on Assad.

The situation in Syria and Iran is a threat to Russia. The US, at the encouragement of Israel, is making war plans towards Iran. That is why Russia is making a louder noise than ever before. It knows that it can make problems, especially for Georgia, should the US start making real plans for an attack on Iran—and all that was done in Syria with chemical weapons and the role that Georgia plays in various efforts to topple regimes is what motivates Russia on many fronts.

Technically the Richard Lugar Lab on paper was a civilian project and for the non-proliferation of biological weapons, but later it “transformed” like a butterfly into the complete opposite and now has an offensive purpose. Jeffrey Silverman: “I have given many interviews on the topic, but these are now blocked from Georgian TV channels and most of the print media.”

Why is VT the only American media – and this includes fake media like InfoWars and the so-called blogs like Anti-War and dozens of others, all of which we believe are now US/Israeli fronts – reporting this huge story?

It isn’t simply that the US uses its own manufactured Sarin gas as an excuse to bomb Syria or more nations in the future. The US is using bio-weapons, not just destroying crops and killing farm animals. The US is researching DNA related to population reduction programs, in what looks to be a plan to kill off specific ethnic groups inside Russia and across the Middle East, introducing through genetics, key vulnerabilities to bring on early death.

Our research into the Warburg family that runs the Federal Reserve system – certainly they run London, Washington, Paris and Tel Aviv – has led us to their early work on eugenics research through organizations set up by the Bush family and their sponsors, the Warburg financed Harrimans. From Wikipedia, of all places:

The eugenics movement was popular and viewed as progressive in the early-twentieth-century United States.[2] Charles Davenport was one of the leaders of this campaign and avidly believed that it was necessary to apply Mendelian Genetics principles to humans. Davenport’s wife, Gertrude Davenport, was also an important figure in this movement and the establishment of the ERO.[3] Gertrude Davenport was an embryologist and a geneticist who wrote papers with her husband supporting the idea that Mendelian genetics theories applied to humans.

Supported by the argument that the eugenics office would collect information for human genetics research, Davenport convinced the Carnegie Institute to establish the ERO.[4] He was well connected to wealthy people during the time and he lobbied them to finance his vision of the ERO. The ERO was financed primarily by Mary Harriman (widow of railroad baron E. H. Harriman),[5] the Rockefeller family, and then the Carnegie Institution until 1939. In 1935 the Carnegie Institution sent a team to review the ERO’s work, and as a result the ERO was ordered to stop all work. In 1939 the Carnegie Institution’s new President, Vannevar Bush, forced Laughlin’s retirement and withdrew funding for the ERO entirely, leading to its closure at the end of that year.[6]

Financing Adolf Hitler and putting him in power was part of their legacy.

American science is working feverishly to kill of as many of the world’s “inferior and undeserving” as possible.  Where have we seen this before?
From the WaPo:

Maj. Gen. Igor Kirillov, the head of the Russian military’s radiation, chemical and biological protection troops, alleged at a briefing that the lab in Georgia was part of a network of U.S. labs near the borders of Russia and China.

Russia’s Kirillov said the documents published by Giorgadze signaled more sinister activities were happening under the cover of civilian research.

Kirillov alleged the deaths showed the Lugar Center used the volunteers as guinea pigs in tests of a new deadly toxin.

“The near simultaneous deaths of a large number of volunteers give reason to believe that the Lugar Center was researching a highly toxic and highly lethal chemical or biological agent,” he said.

The Russian general also claimed that the spread of viral diseases in southern Russia could have been linked to the activities of the Lugar Center. He pointed to the spread of the African swine fever (ASF) from Georgia since 2007 that caused massive losses for the Russian farm sector.

“It’s highly likely that the U.S. is building up its military biological potential under the cover of studying protective means and conducting other peaceful research, flouting international agreements,” he said.

Among the documents released by Giorgadze was a U.S. patent for a drone intended to disseminate infected insects, he said. Other patents covered projectiles for delivering chemical and biological agents.

“Such research doesn’t conform to Washington’s international obligations regarding the ban on biological and toxin weapons,” Kirillov said. “A legitimate question is why such documents are being stored in the Lugar Center for Public Health Research. We hope to receive a precise answer from Georgia and the United States.”

He noted that Russia was worried about the U.S. military commissioning the collection of genetic materials of people from various regions of Russia, including the North Caucasus, and was unsure of the project’s purpose.

The lab in Georgia is “just a small element of a part of a sprawling military and biological program of the United States,” the general said, adding that the Pentagon allegedly has other labs in countries neighboring Russia.

“The choice of location for such labs isn’t accidental,” Kirillov said, characterizing the research facilities as “a constant source of biological threats” to Russia and China.