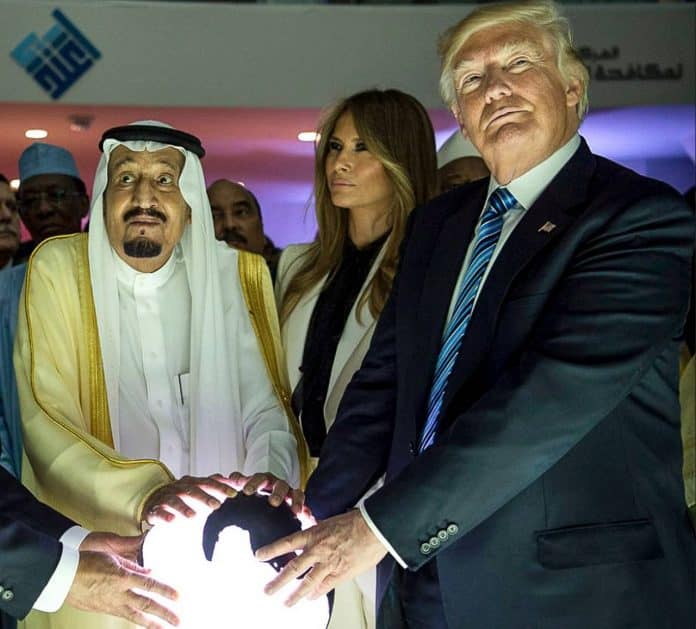 Editor’s note:  Of course,  America doesn’t have a credible president.  It has one that has sent Kushner to Saudi Arabia to secure financing for New Jersey tenements, for Trump properties and to keep cash flowing to ISIS.

Then again, world markets can’t take Saudi sanctions while we go after Iran at the same time, on behalf of…Saudi Arabia.

While the investigation into the disappearance of Saudi journalist Jamal Khashoggi continues, Saudi Arabia has been reproached by foreign officials and media pundits over the case. Former British ambassador to Syria Peter Ford explained why Washington had joined the chorus of Riyadh’s critics.

According to him, there are several reasons behind Washington’s change of heart towards its longstanding Middle Eastern ally.

“I think there is a background here of friction in the US-Saudi relationship in recent months. We’ve seen this a pro po of the American wish to get more Saudi funding for the American de facto occupation of northern Syria. The Saudis have been very reluctant to pay for the running of that 30 percent of Syria which is effectively controlled by the Americans with their Kurdish proxy militia allies.”

He presumed that the second reason was the “Saudis’ unwillingness to pump more oil to compensate for the Iranian oil which is going to disappear from the international market because of American sanctions.”

The diplomat continued that “another major reason for tension and thirdly, possibly, what the Americans would see as insufficient support for Jared Kushner’s much-touted peace in the Middle East plan. The Saudis would have been unwilling to go as far as the Americans wanted on forcing the Palestinians to make concessions.”

“All these reasons together, I think, gave the Americans an incentive to let the dogs off the leash,” he summarized. Ford opined that the disappearance of the journalist “put everybody involved under lots of pressure, not least the United States.”

Jamal Khashoggi, a Washington Post columnist who has lived in self-imposed exile in the US since 2017, went missing on October 2 after he entered the Saudi Consulate in Istanbul to obtain documents needed for his upcoming marriage and presumably did not walk out.

Speaking to Bloomberg on October 5, Saudi Crown Prince Mohammed bin Salman addressed the issue, highlighting that Riyadh had started a dialogue with Ankara on the issue. At the time, rumors emerged that the journalist could be held in the building.

“We are ready to welcome the Turkish government to go and search our premises,” the Crown Prince told the media outlet. “The premises are sovereign territory, but we will allow them to enter and search and do whatever they want to do. If they ask for that, of course, we will allow them. We have nothing to hide.

On October 6, The Washington Post broke, citing unnamed Turkish officials, that the journalist had been allegedly killed by a Saudi “hit squad.” Earlier in the day, the Istanbul public prosecutor’s office opened a probe into Khashoggi’s disappearance.On October 11, the Post reported that the Turkish authorities had audio and video recordings apparently proving that the columnist was murdered inside the consulate.

Saudi Arabia vehemently denied the accusations, saying that the journalist had left the building unharmed and provided access to Turkish investigators to search the place.

On October 12, the Saudi delegation arrived in Ankara to take part in the probe into the disappearance of the columnist.

Saudi Interior Minister Abdulaziz bin Saud bin Nayef dismissed allegations regarding the supposed murder of the journalist as “lies,” stressing that the accusations actually targeted the Saudi government.The Khashoggi case hit the headlines immediately, bringing it into the focus of worldwide attention.

During an October 10 press conference in the White House, President Donald Trump highlighted that the White House was “very disappointed” with the scandal.

Speaking to Fox & Friends on October 11, the US President underscored that American investigators had joined their Turkish and Saudi counterparts to find out what had happened to Khashoggi.

“I don’t like it at all,” Trump reiterated. He highlighted, however, that Washington’s relations with the kingdom remained “excellent.”

Meanwhile, a number of American companies and mass media have withdrawn from an upcoming conference in Saudi Arabia, The Future Investment Initiative, amid the investigation into the case.

While the UK, France and Turkey raised their voices against the Saudi kingdom, Bahrain and the United Arab Emirates signaled their support for Riyadh with regard to the media fuss over Khashoggi’s missing.

“The aim is [to defame] Saudi Arabia, not the wish to reveal the truth. Throw away your reports, we are with [Saudi Arabia] with heart and soul,” Bahraini Foreign Minister Khalid bin Ahmed Al Khalifa stated, denouncing Qatar’s Al Jazeera, in particular, for attempts to pin the blame on Saudi Arabia for the disappearance of the journalist.