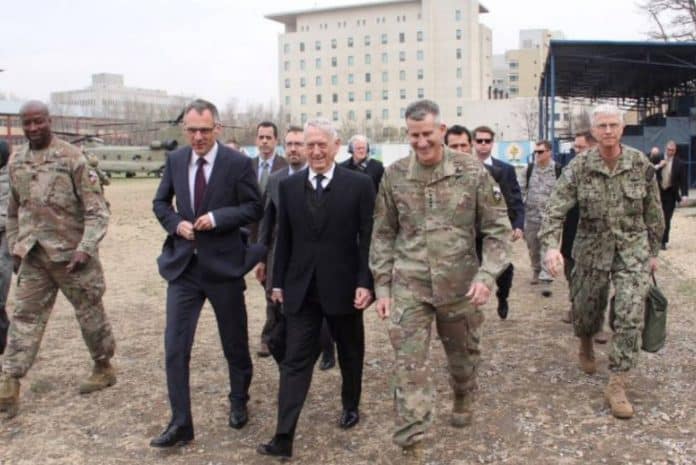 When first time the US decided talks with the Afghan Taliban in 2012, the same were conditional, as America had demanded that before any deal, violence against Afghan people must stop and the Taliban must cut ties to Al Qaeda and other terrorist groups. She seek to distinguish between Al-Qaeda-related fighters and Afghan insurgents—good and bad Taliban.

Afterwards, with the backing of the US, an office of the Taliban was opened in Qatar. After the Tokyo conference on Afghanistan, held in earlier July, 2012, efforts to convince the Taliban for talks with the Kabul government had been expedited and Pakistan was requested to play an important task. In this regard, during the tripartite meeting in Kabul on July 19, 2012, the then British Prime Minister David Cameron and the former Afghan President Hamid Karzai met Pakistan’s former Prime Minister Raja Pervez Ashraf and reiterated Islamabad’s assistance for durable peace and stability in Afghanistan. They fully backed Pakistan to help arrange meetings between Afghan officials and Taliban representatives.

There were also reports that US and the national security adviser to the Afghan President Karzai contacted the Taliban and had secret dialogue with them. However, in a bid to win Taliban’s support for reconciliation, President Karzai had called upon their leader Mullah Omer to take part in the elections. On the other side, the Taliban were willing to resume talks with America, but had refused dialogue with Karzai whom they consider colonial puppet.

Earlier, the Qatar-based talks with America were suspended because the ex-US President Barack Obama did not release five Taliban detainees to participate in peace negotiations as a pre-condition by the Taliban.

However, America along with other Western countries was fully supporting Karzai-led regime to commence peace deal with the Afghan Taliban with the help of Pakistan. While on the other side, top officials of America, Afghanistan and India, including their media continued blame game against Pakistan by accusing its security agencies for cross-border terrorism in Afghanistan—and support to the Taliban. They set aside the fact that US-led NATO forces had failed in coping with the resistance of the Afghan Taliban who are fighting a war of liberation against the occupying forces. In fact, America and other NATO countries wanted to make Pakistan a scapegoat of their defeat in Afghanistan.

In fact, when any terror attack occurs in Afghanistan, America, India and puppet rulers of Afghanistan shift the blame game towards Pakistan. The US has also accused Iran and Russia of assisting the Taliban in Afghanistan. Particularly, the main purpose of Washington was not only to pacify their people and justify the unending war in Afghanistan, but also to fulfill the secret strategic designs against Russia, China, Pakistan and Iran.

Notably, on May 31, 2017, a massive truck bombing of the Afghan capital’s diplomatic section killed more than 150 people and injured hundreds of others, including foreigners. Taliban denied responsibility for the terror attack. But, Afghanistan’s intelligence service accused the Haqqani network by saying that a Taliban-affiliated group in Pakistan, carried out the attack. Addressing the conference-the “Kabul Process on Peace and Security Cooperation”, held in Kabul on June 6, 2017, which was attended by representatives from 26 countries and international organizations, Afghan President Ashraf Ghani criticized Pakistan for a lack of cooperation in promoting Afghan peace and alleged that Taliban insurgents are using sanctuaries on Pakistani soil to wage the insurgency in Afghanistan.

In the same speech, President Ghani offered peace talks to the Afghan Taliban by reiterating his preconditions such as recognition of the Afghan constitution, continuity of the reforms of educating and advancing the rights of women, and renunciation of violence and linkages with terrorist groups.

A Taliban spokesman rejected Ghani’s offer of a peace dialogue by stating that it is another attempt to endorse and prolong foreign occupation of Afghanistan.

In the recent past, when the US-led NATO forces failed in coping with the stiff resistance of the Afghan Taliban in wake of continued attack on their installations and Afghan forces, they have decided to revive peace talks with the Taliban without pre-conditions.

At present, Afghan situation is witnessing new trend as all sides favour dialogue option and agree that there is no military solution. Pakistan has long been insisting on dialogue as only viable option to end Afghan quagmire.

In this respect, the US State Department has recently appointed experienced statesman Ambassador Khalilzad as an adviser for Afghanistan. During the recent visit of Pakistan’s Foreign Minister Shah Mahmood Qureshi to America, Mr. Khalilzad has also held meeting with him. Both the leaders expressed positivity about a dialogue based Afghan peace process.

Pakistan has assured the US of its full support for peace talks with the Afghan Taliban, as this was in line with the policy of the government and in the best interest of Islamabad. Foreign Minister Shah Mahmood Qureshi was addressing a news conference after having talks with the US delegation which was led by the US Secretary of State Mike Pompeo.

In this connection, the State Department spokesperson Heather Nauert said on October 3, this year: “US Secretary of State Mike Pompeo pressed Afghanistan’s Taliban to come to the table to end the long-running war as he called on Pakistan to play a supportive role. Pompeo met in Washington with foreign minister, Shah Mehmood Qureshi, in the latest US outreach to the government of Prime Minister Imran Khan, a longtime advocate of a negotiated settlement with insurgents. Pompeo appreciated Pakistan’s support for political reconciliation in Afghanistan and for peace in the neighbourhood…The top US diplomat, who met PM Imran last month in Islamabad, “emphasised the important role Pakistan could play in bringing about a negotiated settlement in Afghanistan Pompeo “agreed that there was momentum to advance the Afghan peace process, and that the Afghan Taliban should seize the opportunity for dialogue”.

On the other hand, there are also reports that the Taliban have held talks with Afghan Government in Saudi Arabia. Reported talks were related to ceasefire during upcoming parliamentary elections in Afghanistan, to be held on October 20, this year. It is considered that the peaceful elections cannot be conducted in Afghanistan without Taliban’s cooperation. Taliban have refuted the talks. Saudi Arabia is seeking a role to replace Qatar where the Taliban hold a political office. Russia has also emphasized for an Afghan solution based on negotiations between all sides.

Again, it is notable that Islamabad has long been insisting on talks to end the Afghan crisis through dialogue. All the regional players including Russia, Iran and even China have also been favoring this approach. In these terms, the visit of the Foreign Minister Quereshi to the US has been a success in which he has assured the international community about Pakistan’s pragmatic and positive support on all issues including that of Afghanistan. The visit has also resulted in melting the ice between Washington and Islamabad.

In this context, under the caption, “Study Finds Americans Feel U.S’s Involvement Has ‘Failed’, Afghan-based website Tolonews said on October 7, 2018: “A Washington-based research center Pew has found that most American’s feel that the US’s second longest war–Afghanistan, after 17 years has failed…On the 17th anniversary of the US’s involvement in Afghanistan, 49% of Americans say their country has failed to win the war. Report is an eye opener for those who have been supporting Trump’s policy of increasing military pressure to win war in Afghanistan. In fact, the policy has resulted in a huge spike in losses of both Afghan defence forces as well as in the civilian causalities. The reverses in battle ground have forced Trump administration to pursue the option of dialogue with Taliban which was advocated since long by Pakistan….Pakistan has given clear stance in recent days declaring an Afghan led dialogue as only option to bring peace in the region. Pakistan has offered its fullest cooperation in pursuance of peace. Foreign Minister Shah Mehmood Qureshi has strongly rejected the military option and advocated dialogue to end the Afghan quagmire. New survey by pew also supports Pakistan’s stance for a durable solution. New development has once again indicated about positive Pakistani role” (Afghanistan Times and other news agencies also reported).

Reuters reported on October 8, 2018, “The Taliban directed Afghans to boycott upcoming parliamentary elections and demanded a complete withdrawal of foreign forces as the only solution to end the 17-year-old war as they ramped up attacks in strategic provinces. The statement from the hardline Islamic militant group coincided with the visit of top U.S. envoy Zalmay Khalilzad, who has been appointed to lead peace efforts with the Taliban. Khalilzad met President Ashraf Ghani in Kabul to discuss ways to hold Afghan-led peace talks with the Taliban…With less than two weeks to go before the long-delayed elections, the Taliban and Islamic State have stepped up attacks across the country…“Peace is a holy process, and the U.S. government and people are united with the Afghan government and people in this process,” Khalilzad was quoted by Ghani’s office in a statement as saying. Khalilzad is scheduled to visit Pakistan, the United Arab Emirates, Saudi Arabia and Qatar this week as he seeks to bring the Taliban to the negotiating table.”

Nevertheless, in the recent past, after the visit of the US Secretary of State Pompeo to Islamabad and visit of Pakistan’s Foreign Minister Qureshi to America, positive change has occurred between the strained relations of the US and Pakistan. Now, ties between the two countries are improving rapidly. Positive change in Pak-US relationship has resulted into positive change between Afghan-Pakistan ties. Therefore, Kabul has re-opened Pakistan consulate in Jalalabad.

These developments clearly show that now the US has realized that without Islamabad’s help, she cannot achieve durable peace and stability in Afghanistan. Otherwise, the US-led NATO forces will remain entangled in that war-torn country. Hence, with the support of Pakistan, unlike the previous conditional dialogue, the US is reviving talks with the Afghan Taliban without pre-conditions.