Home World ‘Bodies lying everywhere’: Shooting at Crimea college has echoes of Columbine massacre
Share
Twitter
Pinterest
WhatsApp
Linkedin
ReddIt
Email
Print
Tumblr
Digg
It started like any normal day on campus at the polytechnic college in the Crimean city of Kerch — but it quickly turned into a horror story, drawing somber comparisons to the fateful 1999 Columbine Massacre in Colorado.

Before the day would end, at least 19 lives would be taken and dozens of students would suffer injury at the hands of a gun-wielding man. 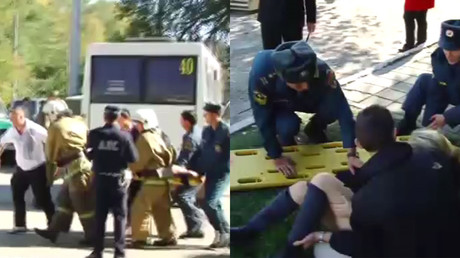 As the drama unfolded, conflicting information was making its way online. In the initial confusion, reports suggested there had been a gas explosion inside the building — but it soon became clear that something much more horrifying was playing out.

Police were now reporting that an“unidentified explosive device” had gone off inside the canteen on the first floor of the college. Forensics experts and FSB explosive ordnance teams were quickly dispatched and tasked with “preventing other possible explosions” as word trickled out that authorities were treating the incident as a possible terror attack. They would later change the classification from terror attack to multiple homicide.

But it wasn’t just the explosion. Inside the building, people were hearing gunfire. Some would later describe seeing men with their faces covered burst into the building, armed with assault rifles and firecrackers, opening fire indiscriminately, terrorizing students and teachers. Only one man responsible for the shooting was found, but in the panic and confusion of the moment, people believed they saw more than one killer. Investigators haven’t ruled out there may be more. 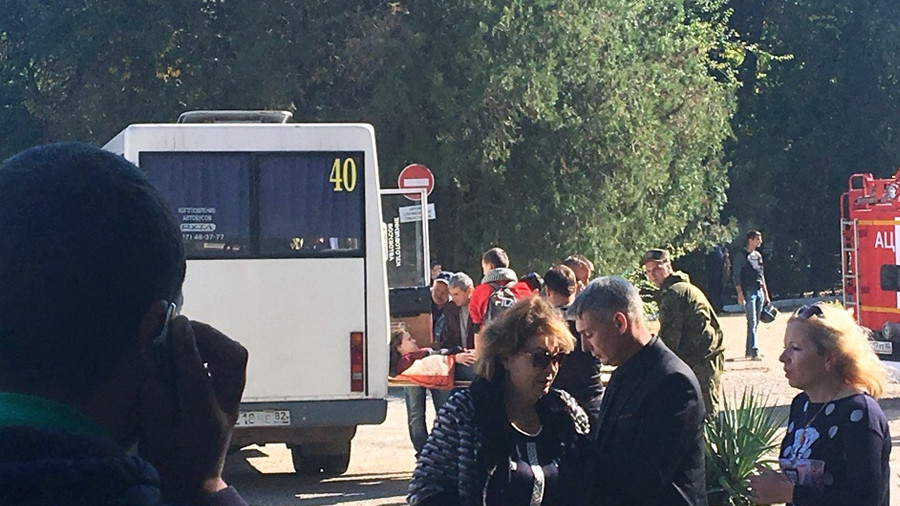 Online, witnesses accounts and gruesome details were beginning to appear on social media. “There was a blast and then the shooting…we started jumping out of the windows… children’s bodies were lying all over the place,” one student recalled of the horror.

As medics tended to injuries at the scene, other victims were rushed to hospital. Local Russian media posted photos showing ambulances and injured people lying on stretchers outside the college. As the dust settled, images from CCTV cameras appeared on the Telegram channel Mash. They showed a young man, wearing a white t-shirt with black text and holding a large gun, making his way down a stairwell. On Twitter, the comparisons to the Columbine massacre immediately began. His clothes bore striking resemblance to those of Eric Harris, one of the two students who killed 13 people and injured 24 with guns and knives at the Colorado high school almost 20 years ago.

The man was quickly identified as Vladislav Roslyakov — an 18 year-old student of the college who police now say shot himself on the second floor of the building after carrying out his rampage.

It turned out that little more than one month ago, on September 8, Roslyakov had received a permit for a 12 caliber rifle. He bought 150 rounds of ammunition for the weapon just a few days before he would walk onto his college campus and murder 19 people.

Then came the reports about this man and the kind of person he was. Quiet, closed-off, uncommunicative and interested in maniacs and serial killers, his classmates said. His parents, they explained, had divorced not long ago. He and his mother had left his father and lived together in a rented apartment.

In a cruel twist of fate, some Russian media reported, that Galina Roslyakova, the killer’s mother, a nurse who works at the Kerch Oncology Center, was there to admit patients wounded by her own son.

Nineteen People Dead, Up to 50 Injured Due to Incident in Kerch, Russia (VIDEO)

Initially, the incident was thought to have been a gas explosion, however subsequent reports from the college revealed that it was an explosive device that caused the deaths of 18 people.

“We are clarifying the information at the moment. Preliminary figures are 50 injured and 10 dead. Eight ambulance crews are working at the site and air medical services are involved,” the press-service for the Crimean Ministry of Health stated.

Medics announced that at least 50 people were injured in the explosion in Kerch and 25 have already been taken to local hospital with moderate wounds.

Local news outlets reported that earlier in the day, students at the college heard a blast and windows of the building were shattered.