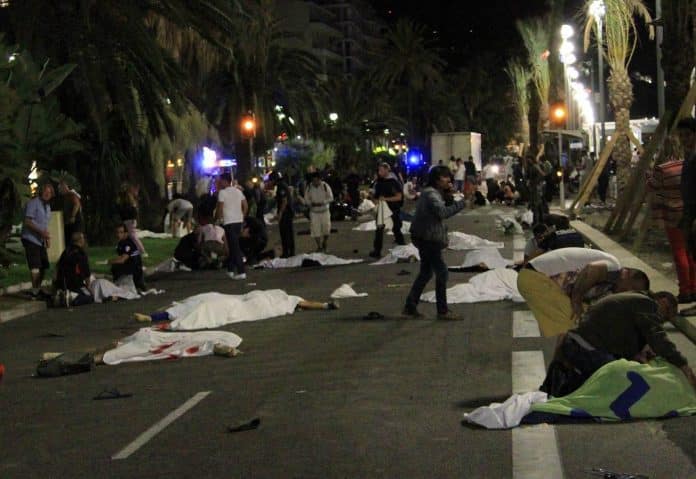 Dear UN anti-terrorism committee,
We have issued a EU/US, North Africa and Pakistan alerts due to intelligence confirming that rogue states such France, UK, Israel and the US are planning conjointly a series of attacks during the midterms elections.
The arrest and raid against Jean-luc Melenchon, real winner of the presidential elections in May 2017.  After he was arrested by the French secret services, and home office led by Bernard Cazeneuve (the one who tried to kill our Jamal Kashoggi in France, Mohamed Boutiche based in Reims).
French agencies organised the killing of a policeman in the Champs Elysees. The reason was that secret polls were giving the national front leader and Melenchon as going to the second round of the elections while Macron was eliminated. The terrorist attack completely changed the game.
Melenchon is seen by Netanyahu and his lobby the CRIF as their enemy. The CRIF is a powerful Jewish organisation, created by banksters from London, in control of the justice, the MOD, the home office, financing most of the political parties, with her corrupted organised crime networks, like Trump is the front man of the New York/Moscow/London organised crime.
Melenchon is also Jewish, born in Morocco, and he has close tied to Putin in Moscow as well. We have the Israelis Gladio-NATO networks, responsible for all the terror attacks in the EU and France recently, that are now behind Jean Luc Melenchon because he is seen as the real winner of the elections.
France tried to assassinate Mohamed Boyutiche because of his revelations in Reims, now they are pushing to eliminate Melenchon, because Netanyahu fears an alliance against Israel. The raid against Melenchon is another evidence that the French diplomats at the UN are conspiring against the UN, her organisations and are supporting a terror sponsored state.
France is now a rogue state in the hand of a very dangerous organised crime networks, led by Israeli prime minister Benjamin Netanyahu with international ramifications. This guy is saying that if the democrats win the congress, Trump will be impeached, so will be Macron. China is to be blamed and to be attacked. The military solution is the only one to neutralise the terrorist networks operating form inside the french state and governments. If we allow these networks to strike civilians with (nuclear/biological and chemical) weapons, there will be huge backlash against Muslims and minorities in the West.
As we have seen it after the fiasco of Nice in July 2016, the israeli networks in France, inside the police, justice, army, political parties, medias, administrations started to push against violence and hatred towards Muslim women wearing ‘burkinis’ and racist ‘pogroms’ started in Corsica where a big Algerian Jewish population is in control of the Island. The former French-Spanish prime minister Carlos Manual Valls, even labelled the Muslims as the ‘interior enemy’. The last time we heard such words were in 1939 in Germany, and we all know what happened.
We are now considering France as a rogue state, a terrorist state, capable of killing all Muslims after false flag terrorist operations or Muslims whistle blowers such as Mohamed Boutiche.  Netanyahu is operating in Paris and can even raid French politicians who opposed Israel. Netanyahu will strike every single country trading with Iran, while implementing his agenda of total chaos, named the guela in his sacred books. That means clearly using Trump to destroy the West from and the UN from within. Hayley has been doing this since 2016. We have never seen such mess, Israeli prime minister has the French nuclear codes, this country must be seized and an international operation should be launched now.
Melenchon would have supported such kind of decision because he knows that the aim in France, for at least a part of the elites linked to Israel, is to genocide all the Muslims in Palestine, Middle East or Europe. Jewish French-Algerian author Eric Zemmour is allowed to prepare publicly, in all the french medias, for a genocide against the Muslims, minorities.  Why is this? This was not allowed in the USA after 9/11, why is it allowed in France, the UK, Germany, Europe? France should be expelled from the UN, all international organisations for massively violating the rights of the Muslims and other minorities, like Israel is doing to the Palestinians.
We are calling for an international military operation in France, supported by at least 12 countries ready now to provide troops, weapons, and knowing perfectly well all the premises. Any terrorist attack is considered as a french, government state operation. We hope that we are crystal clear…
https://www.theguardian.com/world/2018/oct/16/french-leftwinger-jean-luc-melenchon-reacts-angrily-to-police-raids
The French diplomats members of the UN anti-terrorism committee are playing against the UN committees and organisations, they have passed the information to the french government, did you see the reaction? Please read the link.
The Russians have adopted our communications, so are many countries are doing in terms of preventing massive casualties during wave of terror attacks, mainly agencies false flags, we are successful every time. We did it so many times, our intelligence is the most reliable! What the UK, US, France and Israel are sharing, presenting you are 100% of lies, they are covering their terrorists networks. We have with evidence proven our capabilities. They are lying openly since the 11 september 2001….  We must stop their genocides in motion
Please prepare all the UN members to this solution, there are no other on the table…

Covid has wiped out years of progress on life expectancy, finds study, especially among Trump voters