The Synod of the Russian Orthodox Church, which gathered for a meeting in Minsk, decided to break the Eucharistic communion with the Ecumenical Patriarchate.

A statement published on the official website of the Russian Orthodox Church says: “Assigning to oneself the authority to withdraw judicial and other decisions of other Local Orthodox Churches is  one of the manifestations of the new false teaching proclaimed today by the Constantinople Church and attributing the law of the first without equal (primus sine paribus) to the Patriarch of Constantinople with universal jurisdiction.

The Russian Orthodox church had repeatedly urged the Church of Constantinople to exercise caution and refrain from steps that could undermine the unity of Orthodox believers.

The Russian Orthodox Church made the decision to break the Eucharistic communion after the Patriarchate of Constantinople, single-handedly removed anathemas and accepted dissenter and “patriarch” Philaret (Denisenko), into the communion. The Russian Church had deprived Philaret of all ranks and titles and anathematized him.

In general, the issue of Constantinople’s interference goes far beyond the limits of Ukraine. In fact, Patriarch Bartholomew and his hierarchs strike a blow to the canonical structure of Orthodoxy and Orthodox unity on a global scale.

Serbian bishop Irinej (Bulowic) stated that the Ecumenical Patriarchate has provided autocephaly to dissenters. A few days ago, Archbishop Ieronymos of Athens and All Greece refused to meet with Patriarch Bartholomew.

In principle, the termination of Eucharistic communion between the Russian Church and the Patriarchate of Constantinople had occurred in the late 1990s, but only for a few weeks. The reason was the same: Constantinople interfered into the canonical territories of the Russian Church – in Estonia. Yet, Patriarch Bartholomew peddled back and the problem was solved peacefully. Yet, judging by latest statements from the Ecumenical Patriarchate, they are not going to stop. 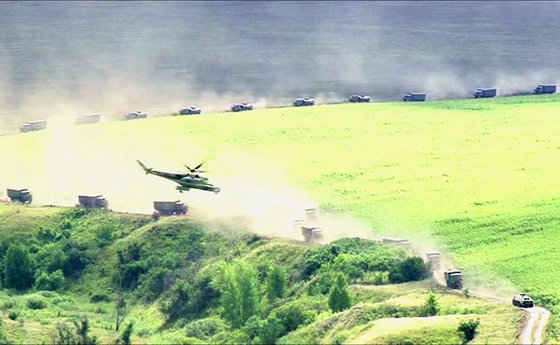 Officially, the Kremlin’s website states that the Security Council was devoted to “the internal Russian socio-economic agenda and international issues.”

However, in addition to this, it was particularly emphasized that the participants of the Security Council exchanged views on the issues of “the position of the Russian Orthodox Church in Ukraine after the decision on autocephaly by Constantinople”.

It is clear that the liberal public is already shouting that “we have a secular state” and that this state should not interfere in church affairs. But, the fact is that, firstly, the Security Council participants “exchanged views.” The theme of religion for the exchange of views even at the Security Council in our state is not taboo. They wanted to – and talked.

The second important point is that the same public didn’t see “nothing” when it was the Ukrainian President Petro Poroshenko who began demanding this autocephaly for the Ukrainian church and for political reasons, comparing the creation of a “single and independent Ukrainian church” with Ukraine’s NATO.

And here there is a very subtle point: if some religious processes are used in a purely political manner, then the state, be it three times secular, perceives these processes as political and assesses from their respective positions.

As some experts note, the “exchange of opinions” on the issue of autocephaly, as if hints that the Russian state began to perceive this issue from the standpoint of national security, and external threats to this very security.

In the channel of the Master of the Pen, for example, they write that during the Security Council, “the meeting’s participants agreed that Washington, behind whose votes the Constantinople patriarch Bartholomew sings, is behind it. Foreign Minister Lavrov expressed this point of view. , who declared a provocation by Bartholomew with the support of the United States, mentioning the special representative for Ukraine Volcker in a sharply negative context. “

And further, the author adds: “By itself, the presidential intervention in the Orthodox drama is probably forced.”

True, the author further blames Patriarch Cyril of certain “mistakes and omissions”, but here it is absolutely incomprehensible where the primate of the Russian Church was wrong, who until the last time had held talks with Varfolomey, met him personally, was in Ukraine after the Maidan events and continues Now do everything to preserve the unity of the Russian Church.

Putin, in turn, naturally has to raise the issue of the unity of the Church and of the actions leading to the split of this Church in Ukraine, since not so much from a religious, but from a cultural, historical and social point of view, these actions pose a danger to Russia, and for Russian Orthodox in Ukraine, who are there, for a moment, several million people.

And from a practical point of view, a situation may now arise of a massive seizure of temples and monasteries by schismatics, from whom Bartholomew himself removed the anathemas imposed by the Russian Church. Moreover, such an activity as the forceful seizure of temples by the same “Filaretists” has been constantly practiced since the beginning of the nineties.

By the way, from a theological point of view, the incident itself of “granting autocephaly” has also already received a theological assessment , and not only among Russian Orthodox theologians.

Thus, the Bishop of the Serbian Orthodox Church, Irenaeus, in his lengthy speech noted: “Ukraine has the canonical Ukrainian Orthodox Church, which as an autonomous Local Church is subordinate to the Moscow Patriarchate, is recognized by all and without exception in Eucharistic communion.

This church does not want and did not ask anyone for autocephaly, not even the Moscow Patriarchate, to which it refers and which in such a case would be called upon to begin the whole procedure, coming out with an appropriate proposal, neither from the Constantinople Patriarchate, which then, in the framework of coordinating the issue, it is called to bring this issue to a pan-Orthodox discussion and a final decision …

In parallel with this canonical Ukrainian Church, there are three schismatic associations in the country, and in addition to them, an aggressive Uniate community. And these negotiations on autocephaly are being conducted with these schismatic “Churches” and at the same time with the state authorities of Ukraine in the absence of the canonical Church and contrary to her will. It goes without saying that the Uniates intervene on the side of the schismators in the most brazen manner.

By the way, according to TASS, citing sources in the hierarchy of the Roman Catholic Church, “the Vatican does not categorically interfere in the affairs of Orthodoxy, but it is already clear that the Holy Throne will not come into contact with the church recognized by Bartholomew (Patriarch of Constantinople)” .

What are these “schismatic associations” from a political point of view? This, for the most part, is Ukrainian neo-Nazis. Therefore, the issue of national security in the context of church events in Ukraine is even more justified. Neo-Nazism, and not neo-but simply Nazism, is a threat to which Russia has already been subjected, and everyone knows what the consequences of this threat were in 1941-1945.

The question is quite logical, what will happen next? After this Security Council? Most likely, the expectation of reciprocal steps of the Constantinople Patriarchate, the Ukrainian authorities, will follow, if there remains at least someone at least minimally adequate, and, apparently, Washington.

If these “respected parties” surrender and, at least, “freeze the process,” then Moscow, in turn, will retreat from considering the issue and taking concrete measures. But if not, then our diplomacy will be involved.

Because, for example, we now have very good relations with the Turkish leadership. And the Ecumenical Patriarchate is, it is worth recalling, in one of the quarters of Istanbul.