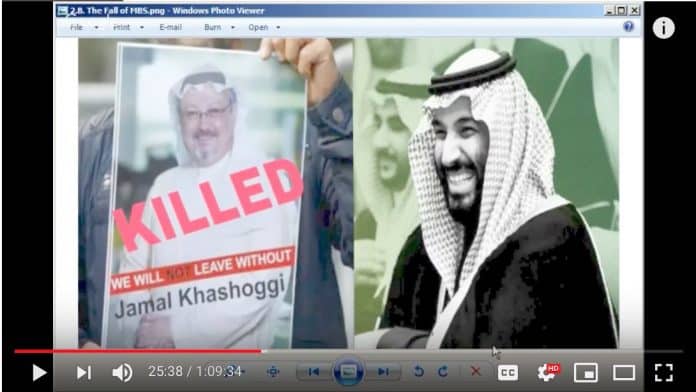 The Murder of Jamal Khashoggi in the Changing Business of Energy, Banking and War: Watch it above, check out the links below.

2.B The Rise AND FALL of MBS

4, The Fame and Shame of the Turkish-Saudi Family of  Dr. Mohamed Khaled Khashoggi and His
Wife Samiha Ahmed

4.A. Picture– Adnan Khashoggi and His Nephew, Jamal Khashoggi

4.B. Jamal Khashoggi’s interview in Turkey may have aroused anger in high
places

4.C. Jamal Khashoggi (JK) with Islamic mujahadeen in Afghanistan prior to 9/11. JK was a devotee and member of the Muslim Brotherhood

4.D. Adnan Khashoggi, then billed as “the richest man in the world,” was featured in the hit TV show, “Lifestyles of the Rich and Famous”

Lifestyles of Rich and Famous

4.H. Ibn Saud with Franklin Roosevelt, 1945 oil resourse of Saudi Arabia are “a stupendous source of strategic power and one of the great material prizes of world history.” US State Department, 1945

4.I. Israel and Saudi Arabia