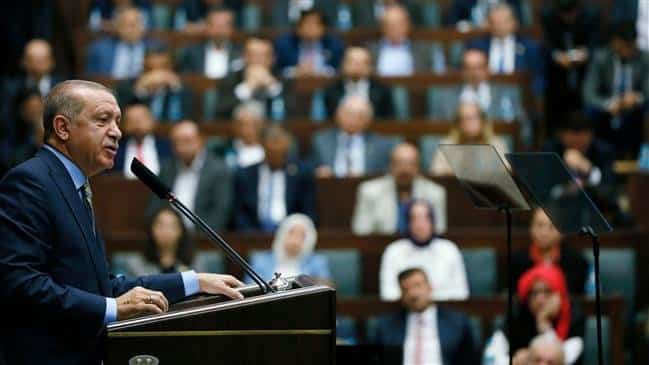 [ Editor’s Note: We have a big surprise from Mr. Erdogan today with his coming out for challenging diplomatic immunity under the Vienna convention. This is even more amazing when we think of the nasty things he has done, inside Turkey and then Syria, with his support of proxy terrorist forces there.

But if he ever stands in the dock for those crimes, he will have lots of company. If we were to have a group trial of state-sponsors of terrorism, it would make the Nuremberg trial look like a warm up.

We are running down a story that Erdogan had the price up to $5 billion to the Saudis not to show some of his evidence. Turkey needs the money, and is angry at the Saudis having supported separatist Kurds against the Turkish government – an act of war in itself.

But what Erdogan has done here might put the diplomatic immunity issue in play over this one killing, as we have so many more mass murderers whom it can be applied to. We may never see the day when countries turn over former government officials for trial, but at least they would not be able to travel outside their countries, or be honored.

For all the non-state actors involved, the contractors, it also makes all of their assets seizable. That would get some attention. But now we must wait and see if mass media, the peace foundations, academics and major religious groups, etc., will jump into this critical battle – or just keep their heads down like they usually do … Jim W. Dean ]

Turkish President Recep Tayyip Erdogan says all those behind the murder of dissident Saudi journalist Jamal Khashoggi should be brought to justice, calling for all suspects in the case to stand trial in Istanbul.

“My demand is that 18 people be tried in Istanbul,” Erdogan said in an address to lawmakers from his ruling party at the parliament in Ankara on Tuesday on the case of Khashoggi, who was murdered after entering the Saudi consulate in Istanbul on October 2.

Erdogan also noted that “all those who played a role in the murder” have to face punishment. The “very savage murder” had been “planned” days in advance and there was a roadmap to perpetrate the killing, Erdogan pointed out.

He further criticized Riyadh’s contradictory reports in the days following his disappearance, saying Ankara will not stop its investigation until all major questions in the case are answered.

“Why did these 15 men meet in Istanbul on the day of the murder? Who ordered them to do so? Why did they open the consulate building to investigation not immediately, but days later?” asked Erdogan.

“Why don’t they still produce the body of the person after their admission? Who is the ‘local cooperator’ that a Saudi official pointed at as the person who took the body? You should reveal who this local cooperator is,” he added.

Elsewhere in his address, the Turkish president called for an independent commission to be set up to probe the murder.

Moreover, Erdogan questioned the Vienna Convention and the immunity it affords diplomats.

Erdogan had earlier promised to reveal the “naked truth” about the murder within days. During his speech, He gave a series of new details on the case.

On the day of the murder, he said, the surveillance system at the Saudi consulate in Istanbul had been deactivated on purpose.

Khashoggi first came to the Saudi consulate in Istanbul on September 28 to get his marriage documents, said Erdogan, adding that the “roadmap” to kill him started with that visit.

Earlier, Reuters reported that a top aide to Saudi Crown Prince Mohammed bin Salman has ordered the killing of Khashoggi via a Skype call to the kingdom’s Istanbul consulate.

Arab and Turkish intelligence sources told Reuters on Monday that Saud al-Qahtani, who was dismissed last week as the kingdom’s royal court adviser, had hurled insults at Khashoggi via Skype as the critic was being interrogated by a 15-man team. He answered Qahtani’s insults with those of his own, the sources added.

A Turkish intelligence source said that Qahtani had instructed his men to dispose of Khashoggi, saying, “Bring me the head of the dog.”

However, it was not clear if Qahtani had watched the entire proceedings, which a high-ranking Arab intelligence source described as a “bungled and botched operation.”

According to the sources, Erdogan is in possession of the audio of the Skype call but is refusing to release it to American officials.

After long insisting that Khashoggi had exited the consulate alive, Riyadh finally admitted on October 20th that he had been murdered inside the  mission, blaming the killing on a “rogue operation.” Saudi officials alleged that “discussions” at the mission had turned into “a brawl,” resulting in the journalist’s murder.

Speaking on the case in Indonesia, Saudi Foreign Minister Adel al-Jubeir promised a “thorough and complete” investigation into the death. He added that, “Mechanism and procedures are put in place to ensure that something like this can never happen again.”

Eight Saudi, Arab and Western diplomatic sources also confirmed to Reuters that Qahtani is the same person who led the interrogation of Lebanese Prime Minister Saad Hariri during his last year’s reported detention in Saudi Arabia.

Hariri stunned Lebanon on November 4, 2017 by announcing his resignation in a live television broadcast from Saudi Arabia. He, however, managed to get out of the kingdom amid international pressure on Riyadh and rescinded his resignation.

Three Arab sources familiar with the incident said that upon arrival in Riyadh, Hariri had been ushered into a room where Qahtani was waiting for him with a security team.

“He (Qahtani) told him you have no choice but to resign and read this statement,” one of the sources said. “Qahtani oversaw the interrogation and ill-treatment of Hariri.”

Qahtani was also said to have played a role in the Saudi-led boycott of Qatar and the alleged “anti-corruption campaign” spearheaded by bin Salman last November.

The video purportedly recorded from a nearby high-rise in Istanbul shows two men burning papers in a trash container.

Additionally, CNN published surveillance footage that showed a member of the Saudi hit squad leaving the Saudi consulate by the back door, wearing Khashoggi’s clothes, a fake beard and glasses on the day he was killed.

A Turkish official identified the man as Mustafa al-Madani and said that he was a “body double.”

“You don’t need a body double for a rendition or an interrogation,” the official said. “Our assessment has not changed since October 6. This was a premeditated murder and the body was moved out of the consulate.”

Another vehicle, carrying no license plate, was removed from the consulate with a tow truck, according to the Hurriyet Daily News.

In another development, a source familiar with the plans of CIA Director Gina Haspel said that she was traveling to Turkey to address a probe into Khashoggi’s murder.

US President Donald Trump had initially said that the Saudi account of Khashoggi’s death was “credible,” but later noted that he was “not satisfied” by the narrative.

Meanwhile, US Treasury Secretary Steven Mnuchin has arrived in Riyadh, where he met with bin Salman. The US official has, however, said that he would not attend the Future Investment Initiative conference, which opened earlier on Tuesday amid an international boycott of the event.

Many high-ranking figures and companies have dropped their plans to take part in the three-day event amid an international outcry over Riyadh’s admission of Khashoggi’s murder. The CEOs of Siemens, Total and French state-owned utility EDF are the latest to pull out of the summit.

“Siemens is a reliable and committed partner of the kingdom and its VISION 2030. But for now, truth needs to be found out and justice applied,” Siemens CEO Joe Kaeser said in a statement on his LinkedIn account.

Separately, hackers briefly defaced the website of the Riyadh investment conference on Monday.

Visitors to the site on Monday saw a picture of bin Salman holding a curved sword over the head of Khashoggi, as a masked figure in the background waved the black flag of the Daesh terrorist group.