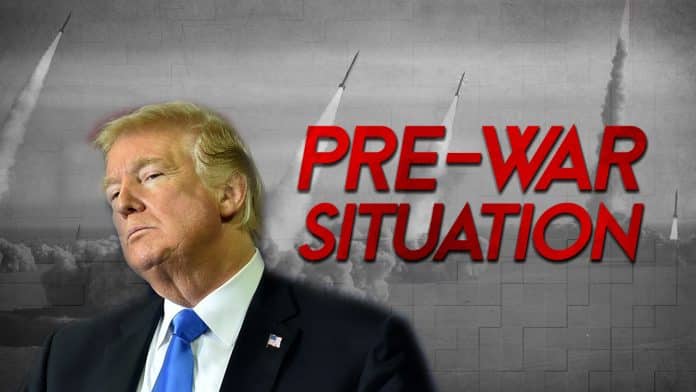 Tensions in the diplomatic relations between the United States and Russia seem to be ramping up to a potentially pre-war level. The increasingly thought diplomatic rhetoric of both Moscow and Washington as well as hostile US actions against Russia and an active pro-war propaganda campaign within the US military are openly signaling that the sides may posslby soon find themselves on the verge of open regional war.

On October 20, US President Donald Trump declared that the US would be abandoning the Intermediate-Range Nuclear Forces (INF) Treaty claiming that the decision comes as response to multiple Russian violations of the treaty, which had put a stop to the development of nuclear and conventional missiles, as well as their launchers, with ranges of 500–1,000 and 1,000–5,500 km.

On October 21, reports citing senior White House officials appeared claiming that Washington may also withdraw from another arms treaty with Russia – New START. The deal signed in 2010 reduced the number of strategic nuclear missile launchers by half.

Trump’s announcement gave rise to a strong response from Russia. Deputy Foreign Minister Sergey Ryabkov stated that US withdrawal from the INF Treaty would be a very dangerous step, which would trigger “retaliatory measures, including ones of a military and technological nature”. He described the US stance as “attempts to achieve concessions from Russia through blackmail”.

On October 22, Kremlin Spokesman Dmitry Peskov warned that Russia will take measures to restore “balance in this sphere” and ensure “its own security” if the INF Treaty is broken. He said that Moscow has provided evidence at various levels that Washington eroded the basis and key provisions of the treaty by “installing anti-missiles, which can be both interceptors and also short and medium-range missiles, using combat drones, which are de facto nothing other than short and medium-range missiles.”

Meanwhile, Trump came with a new statement on the issue vowing that the US will build up its nuclear arsenal in response to the alleged aggressive actions and violations by Russia and China. Beijing is not a part of the INF Treaty, but this does not seem relevant to the Trump administration.

National Security Adviser John Bolton, who has recently arrived in Russia, pushed the idea that Washington is breaking the deal because it does not include China and North Korea, which develop missiles that may pose a threat for “potentially deployed American forces”.

The actions of the Trump administration have already led to increased tensions in the Middle East and an economic and diplomatic conflict with China. Now, it seems that instability and a threat of military confrontation is growing in Europe.