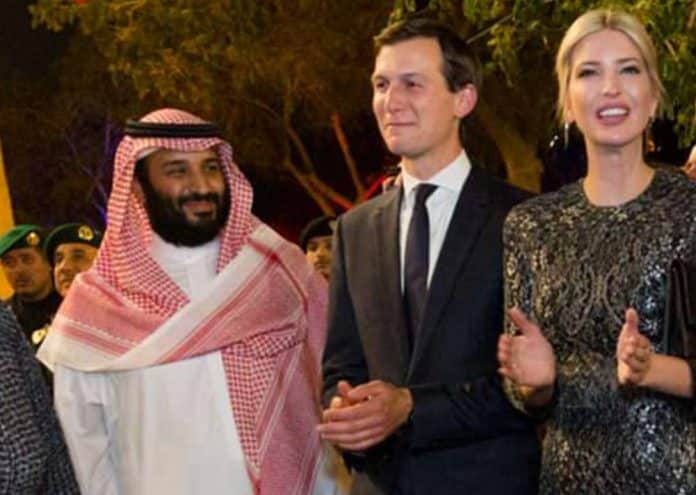 Editor’s note:  The following report is from the UK Daily Mail from April 2018.  It confirmed that Jared Kushner brought the Saudi Crown Prince a list of “combined enemies,” which included Jamal Khashoggi, “to be dealt with” by Saudi security forces.

ce Mohammed bin Salman bragged of receiving classified US intelligence from Jared Kushner and using it as part of a purge of ‘corrupt’ princes and businessmen, DailyMail.com can disclose.

The de facto ruler of the Middle East’s largest economy is currently on a US tour which has seen him meet President Donald Trump in the White House, hold talks with a string of the country’s richest and most influential people and book the entire Four Seasons in Beverly Hills for himself and his entourage.

Sources have told DailyMail.com that the prince – known by his initials MBS – has been boasting about his close relationship with the president’s son-in-law and senior adviser, and the intelligence which he has told his circle Kushner passed to him. 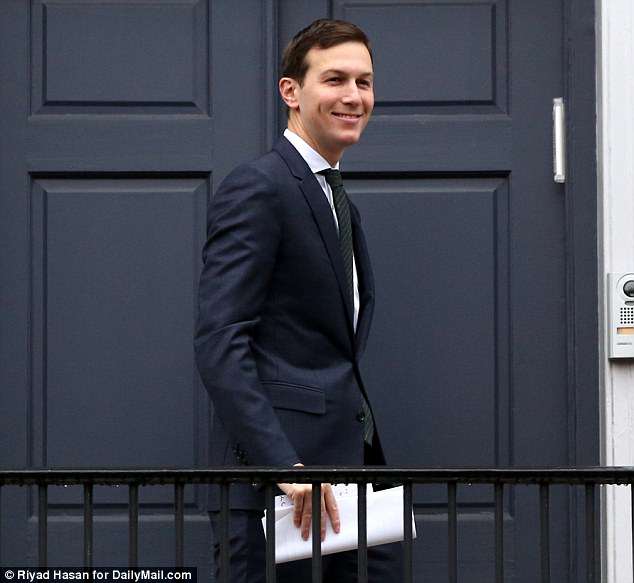 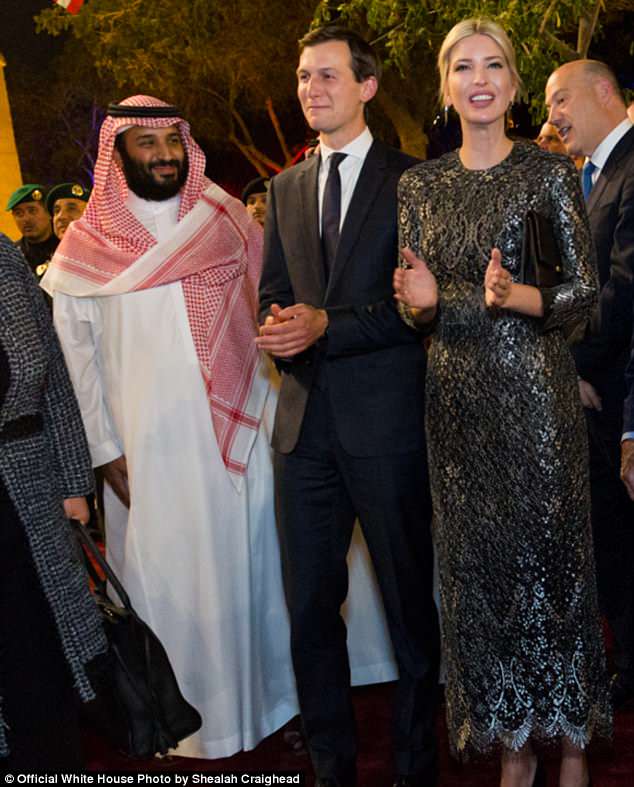 Kushner was said to have a late night meeting discussing intelligence with Salman in October. Kusher and Salman are pictured above with Ivanka Trump at the Murabba Palace in Riyadh last May

Relationship: Jared Kushner took part in a lunch at the White House last week which his father-in-law threw for Mohammed bin Salman

The crackdown on ‘corruption’ in the Saudi kingdom was led by MBS and began in November, days after he had met Kushner for talks in Riyadh.

But it saw allegations of torture as hundreds were rounded up, including princes from rival parts of the Saudi royal family and some of the country’s wealthiest businessmen.

DailyMail.com revealed a photograph showing the detainees sleeping on the floor of a ballroom at the Riyadh Ritz Carlton, and disclosed that some had been tortured.

The New York Times later reported that one of the detainees had died from his injuries.

Most are said to have reached ‘settlements’ with the Saudi government, and MBS himself boasted in a 60 Minutes interview that the government had regained at least $100 billion from them.

Kushner claimed through his attorney Abbe Lowell that it was a ‘false story’.

Peter Mirijanian, Lowell’s spokesman, said: ‘The alleged exchange never happened. Mr Kushner was and is well aware of the rules governing information and follows those rules.’

Despite Kushner’s denial sources have told DailyMail.com how MBS boasted in private that Kushner was the source of intelligence used in the round-up.

He also told members of his circle that the intelligence included information on who was disloyal to him. There is no way to independently verify the truth of the boast.

‘Jared took a list out of names from US eavesdrops of people who were supposedly MBS’s enemies,’ said one source, characterizing how MBS spoke about the information.

‘He took a list out of these people who had been trashing MBS in phone calls, and said ‘these are the ones who are your enemies’.

‘MBS was actually bragging about it in Saudi Arabia when it happened, that he and Jared sat up until 4am discussing things, and Jared brought him this list.’

The Riyadh source said: ‘They sat for several hours together. They literally laid out the future map of the entire region, that’s why they stayed up to the early hours of the morning from the afternoon before.’

The intelligence allegedly discussed during Kushner’s visit to the Middle East last October was said to have came from U.S. wiretaps on conversations between Arab royals in hotels in London, in major U.S. cities and even on yachts docked close to Monte Carlo, a favorite playground of the super-rich.

A separate source told DailyMail.com that it was being said in the Gulf that the president’s son-in-law took a copy of information from the daily intelligence briefing provided by the intelligence community to the White House, and shared its contents with MBS.

The intelligence named several family members who were opposed to his rise, it was said.

‘Kushner got hold of an intelligence briefing,’ said the Riyadh palace source, recounting the version which originated with MBS. ‘At that time he had a high level of security clearance and had access to that. He copied it and provided its contents to MBS.

‘The CIA are doing their job by briefing the president on what is happening internationally.

‘This is a briefing by the CIA to tell the president that some members of the Saudi royal family are plotting in this and that country.

‘Kushner took that part of the briefing and flew to Saudi Arabia to impress MBS.’

The disclosure comes after The Intercept reported that Kushner had a late night meeting with Salman and discussed the names of Saudis who opposed his power grab.

MBS bragged to his closest regional ally, Abu Dhabi Crown Prince Mohammed bin Zayed – the de facto joint ruler of the United Arab Emirates – and others that Kushner was ‘in his pocket,’ a source told The Intercept.

Access to the president’s daily brief is closely guarded, but Trump has the legal authority to allow Kushner to disclose information contained in it as the president is the ultimate declassifying authority and legally free to do so at any time.

However if Kushner, 37, had passed on names to the Saudis, the move would be a stunning intervention by the US into the internal affairs of an allied nation.

If Trump’s son-in-law, however, discussed the names with the Saudi prince without Trump’s specific permission, he may have violated federal laws around the sharing of classified intelligence.

Kushner’s access to intelligence is an issue which has come to bedevil the White House.

He has been unable to secure a permanent security clearance, for reasons which remain unknown.

In February chief of staff John Kelly moved to prevent any White House official with only interim security clearance from having access to top secret/sensitive compartmented information, meaning Kushner can only access ‘top secret’ material.

As a result he no longer had access to the daily intelligence briefing.

White House press secretary Sarah Huckabee Sanders claimed it would not affect his ability to do ‘the important work he has been do’.