The Royal Navy’s brand spanking new aircraft carrier, the HMS Queen Elizabeth has been deployed on its first major mission, a jolly to New York. It’s being used as a giant floating trade fair.  There are no hostesses in bikinis luring in businessmen with free pens, instead there are highly-trained sailors standing to attention thinking “I didn’t sign up for this shit”.

My advice to the crew would be to try and enjoy it, get ashore, sample the restaurants, catch a show maybe, because they’re more likely to be parked off countries covered in sand in the decades ahead.

Seeing ‘Big Lizzie’ (that’s what they’re calling it) steaming towards New York made me wonder if all this was part of the Admirals’ original funding pitch for a brand new aircraft carrier or two. “You see minister, these ships will allow us to continue our pretense of being able to project power around the globe, and if that fails, we could just use it as a very expensive trade stall?”

Surely it must be slightly humiliating that the pride and joy of the British navy is being utilized as a very large sales booth to flog trade deals that Britain can’t even cut yet, because it remains still very much inside the EU.

The vessel’s Captain Jerry Kyd revealed that his aircraft carrier stopped just yards from where Admiral Lord Nelson used to anchor his ships in New York, back in the century when that meant something.  For me it’s hard to imagine Lord Nelson inviting a delegation of business leaders aboard HMS Victory for a finger buffet and short slideshow on post-Brexit business opportunities.

There were plenty of military analysts who were questioning whether Britain even needed any new aircraft carriers, considering that paying for them meant the navy couldn’t then afford to pay for enough sailors to actually sail them.

Well, those analysts must be feeling pretty silly now at the sight of Britain’s International Trade Secretary Liam Fox, striding down the runway declaring to the world, “we want to be open for business, should Brexit ever happen… have you seen the size of our boat?”

When I see this aircraft carrier pitching for business though, it doesn’t look like a display of financial and martial prowess, it looks like a little bit needy. 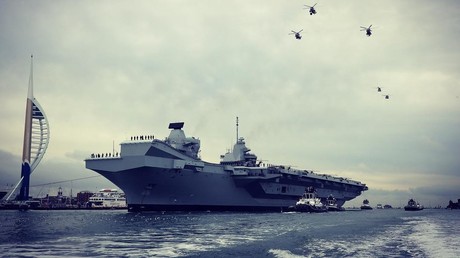 Britain’s Defence Secretary Gavin Williamson, the guy who threatens Armageddon every time Russia’s carrier passes through the English Channel, made the trip to see Big Lizzie in the Big Apple.

He declared that: “HMS Queen Elizabeth is a symbol of our commitment to our security and the security of our allies,” which to me sounds strange when it’s anchored off the US. Washington has about 10 carriers which are bigger than Britain’s flagship, in fact the Nimitz-class models are so big they’re not even allowed in New York harbor – so who’s actually being impressed?

I find it hard to imagine this kind of stunt would work or be accepted anywhere else. Parking your biggest battleship off the coast of France for example is unlikely to be greeted as just a bit of grandstanding fun – it would be more of a sign that Brexit negotiations have gone extremely wrong indeed.

The sight of HMS Queen Elizabeth off the coast of Manhattan for me is extremely symbolic. It shows the military core which is the only thing keeping the ‘special relationship’ between the UK and US alive; it shows Britain’s desperation to be a global power again, whatever the cost; and it shows the lengths some people will go to see the Statue of Liberty close up. They should have taken the Staten Island ferry instead… it’s free.

Simon Rite is a writer based in London for RT, in charge of several projects including the political satire group #ICYMI. Follow him on Twitter  @SiWrites