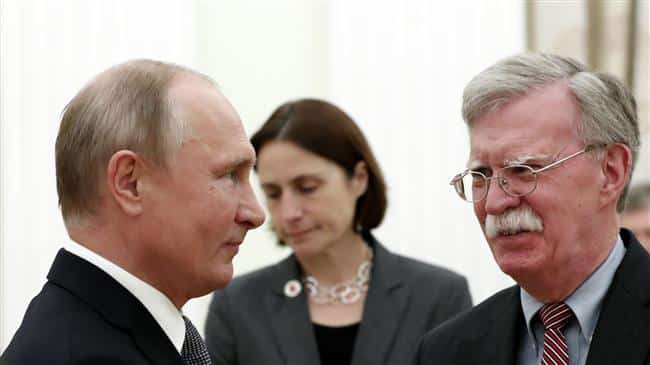 Trump wants to meet Putin in Paris on November 11: Bolton

[ Editor’s Note: An infamous intelligence entity once told me “always engage”, as the hunkered down position closes off many key avenues of discovery; and that even when you knew people were trying to screw you, you could learn why, and who were they working for, and who was associated with them.

While many might think that Putin might be nuts to meet with Trump, Putin understands the game. Trump would not want to meet with him unless he wanted something, and hence would have something to offer.

It has already been leaked that Trump will be looking to renew the INF Treaty if it includes China, which was never a signatory. Maybe Trump thinks he can leverage Putin on China and stir the pot there.

Although US-Russia trade has grown over the last year during the growing hostile Trump-Bolton climate, the China-Russia trade growth has a much larger potential; and even the EU is pivoting trade toward China to balance the trade squeeze from the US.

That their meeting would be on the sidelines of the WWI commemoration is an interesting historical backdrop – maybe a fluke, and maybe not. The last time they met, we did not hear very much, to the displeasure of many.

One thing we do know – the US military industrial complex is stirring things up wherever it can to justify big defense budgets, and we hear no one in Congress, or in the media offering a direction toward deescalation, as they know the Trump gang has no interest in that.

The long discussed chaos theory of world power, which the Israels claim to be the master of is on our doorstep, and I see no relief in sight … Jim W. Dean ]

“I think President Trump will look forward to seeing you in Paris on the sidelines of the celebration of the 100th anniversary of the Armistice,” Bolton told Putin in Moscow, where they held talks on Tuesday, AFP reported.

Putin said, “It would be useful to continue a direct dialogue with the president of the United States… for example in Paris, if the American side is interested.”

“It is possible and necessary to find points of convergence,” the Russian leader said, adding that despite American sanctions trade between the two countries had actually grown.

About 60 heads of state and government, including Trump and Putin, are likely to attend the November 11 World War I commemorations in Paris.

His visit comes after Trump announced he was planning to abandon the decades-old Intermediate-range Nuclear Forces Treaty (INF), over claims that Moscow violated it. The key arms control treaty was signed by President Ronald Reagan and Mikhail Gorbachev, the last Soviet leader, in 1986.

The 1986 treaty banned all land-based missiles with ranges of 500 to 5,500 kilometers (310 to 3,420 miles) and included missiles carrying both nuclear and conventional warheads. The original ban between Moscow and Washington led to the elimination of 2,692 missiles.

The US claims that Russia’s newly-deployed Novator 9M729 cruise missiles fall in the banned category and pose a direct threat to members of the NATO military alliance. Russia finished testing the missile in 2014.