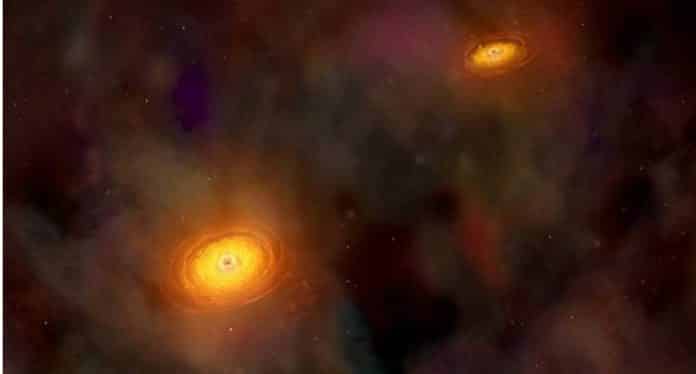 New research apparently confirms a theory about black holes and galaxies merging over time and producing bigger and bigger galaxies and black holes.

Astronomers from the University of Hertfordshire, aided by a team of international scientists, have managed to discover evidence of the existence of a large number of double supermassive black holes which may actually be precursors of the full merger of these black holes.

The study, which was published on Wednesday in the Monthly Notices of the Royal Astronomical Society journal, postulates that this discovery confirms that black holes and entire galaxies merge over time, leading to the creation of bigger galaxies and black holes.

© AP Photo / M.Weiss/NASA
Astronomers Discover Monster Black Hole the Size of 20 Billion Suns
Dr. Martin Krause, lead author and senior lecturer in Astronomy at the University of Hertfordshire, has revealed that the scientists were tracking the direction of powerful jets emanated by supermassive black holes and discovered signs that some black holes are orbiting one another.

“We have studied the jets in different conditions for a long time with computer simulations. In this first systematic comparison to high-resolution radio maps of the most powerful radio sources, we were astonished to find signatures that were compatible with jet precession in three quarters of the sources,” Dr. Martin Krause, lead author and senior lecturer in Astronomy at the University of Hertfordshire, said as quoted by EurekAlert!.