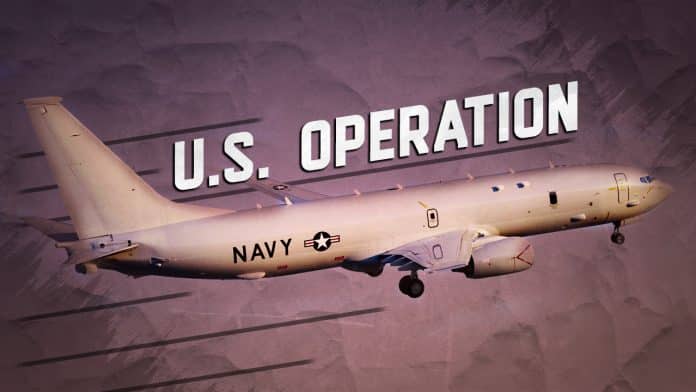 “Thirteen UAVs moved according to common combat battle deployment, operated by a single crew. During all this time the American Poseidon-8 reconnaissance plane patrolled the Mediterranean Sea area for eight hours,” Colonel General Alexander stated adding that when the UAVs faced Russian “electronic warfare screen, they moved away to some distance, received the corresponding orders and began to be operated out of space and receiving help in finding the so-called holes through which they started penetrating.”

Despite this, seven UAVs were downed, and control over six drones was gained through electronic warfare systems.

Colonel General Fomin also emphasized that it’s needed “to put an end to the provision of money, weapons, equipment and various substances to terrorists, including chemical ingredients used during the so-called chemical attacks that are later blamed on the Syrian government.” He noted that most of these tools and means were produced in foreign countries, particularly NATO member states.

Meanwhile, Israeli Defense Minister Avigdor Liberman vowed that Israel “will not accept any restrictions” on Israeli freedom of operation in Syria. Liberman commented on the recent reports by Israeli media that Russia wants to reshape the format of the Moscow-Tel-Aviv contacts and demands Israel to provide earlier warning of strikes.

After the incident with the Russian IL-20 military plane in Syria, Moscow already noted that Israel ignores the existing hot-line agreement and provides a false and untimely info on its actions in the war-torn country. The Russian Defense Ministry openly pointed out that the IL-20 plane was downed by Syrian air defense fire because of “hostile actions” of Israel. In response, Russia supplied S-300 systems to the Syrian military.

This week Israel’s ImageSat International has released a group of satellite images alleging that the deployment site of the Syrian S-300 system is located near the village of Masyaf in the province of Hama.

The situation remains tense in the Idlib demilitarization zone where militant groups continue shelling targets in the government–held area. The situation is especially complicated in the countryside of Aleppo where the Syrian Army is even forced to carry out active retaliatory strikes.