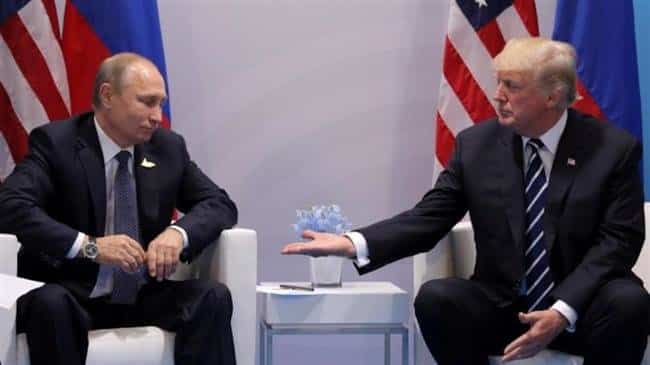 [ Editor’s Note: This was quite a morning surprise, and on a weekend no less. There was no mention if this could even be held before or soon after the State of the Union address as we know Trump does love to dominate the media so other voices and issues are not heard.

As Putin historically is an “always engage” guy, he would probably accept. I have a suspicion that Trump might not really want to break the treaty, but to bring China under it, which makes sense, and he is trying to get Russia’s cooperation.

That of course could be a ploy to disrupt the growing military and economic ties between Russia and China, which would be a major coup if the US could pull that off. But I doubt they would sleep walk into such a trap.

Needless to say the US was planning to expand its military footprint to force Russia and China to do the same, to even maintain their 1 to 10 military spending ratio disadvantage with the US and NATO.

VT cannot get a straight answer from anyone in US government on how someone with one tenth the military spending, no major force logistics capacity, and a huge border to defend, can be deemed a credible offensive military threat… Jim W. Dean ]

The White House has formally invited Russian President Vladimir Putin to Washington in early 2019, an idea that was put on hold in July amid anger in the US over the prospect of such a summit.

The invitation was announced Friday by US National Security Advisor John Bolton during a news conference in Tbilisi, Georgia.

“We have invited President Putin to Washington,” Bolton said at the news conference.

Bolton held meetings with Putin and other Kremlin officials in Moscow to discuss the US withdrawing from a Cold-War era nuclear weapons treaty.

US President Donald Trump held a summit with Putin in July in Helsinki, the Finnish capital, and then issued Putin an invitation to visit Washington in the autumn.

It was not immediately clear if Putin had accepted the invitation.

Trump’s earlier invitation to Putin sparked outrage in Washington, including from lawmakers in Trump’s Republican Party, who argued that Putin was an adversary not worthy of a White House visit.

Putin told Bolton that Russia was sometimes surprised by unprovoked steps that Washington took against Moscow.

Bolton, in a separate interview with Reuters, strongly criticized Russian foreign policy, saying Moscow’s behavior on the world stage was one of the reasons Washington had imposed sanctions on Russia and was now considering imposing more.

“It will be helpful if they (the Russians) stop interfering in our election … get out of Crimea and the Donbass in Ukraine … stop using illegal chemical weapons to conduct assassination attempts against Russian exiles in the West, and if they would be less intrusive in the Middle East,” he said.

US Special Counsel Robert Mueller is examining Russia’s alleged interference in the 2016 US presidential election. Russia denies any meddling in the US election system.

Bolton’s visit to Moscow came after Russia said it would be forced to respond in kind to restore the military balance with the United States if Trump followed through on his threat to quit the 1987 Intermediate-range Nuclear Forces Treaty (INF) and began developing new missiles.

On Saturday, Trump announced that Washington would withdraw from the historic accord after alleging that “Russia has violated the agreements … for many years” in the framework of the treaty.

The announcement and the accusation drew the Kremlin’s response on Sunday, denouncing such allegations and vowing to respond with military, technological and other means necessary should the White House insist on pulling out willfully.