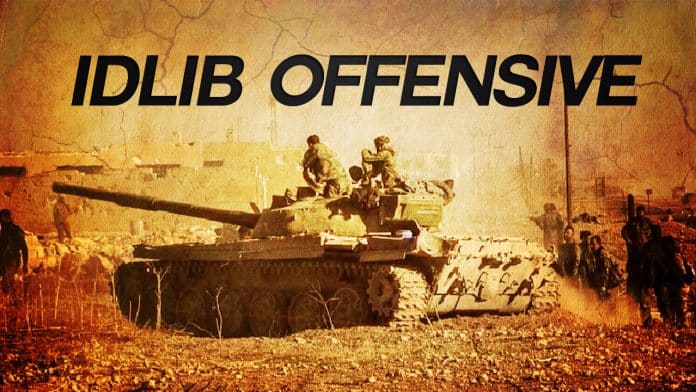 On October 27th, the leaders of Turkey, France, Germany and Russia met in Istanbul to take part in a summit on the conflict in Syria. The sides discussed the situation in the war-torn country and declared their commitment to a political solution of the crisis. However, the only practical step agreed during the summit was the decision to move towards the establishment of the Syrian constitution committee by the end of the year.

During a briefing after the 4-way summit, Russian President Vladimir Putin said that the Syrians need to decide their country’s future themselves and that the future of Syrian President Bashar al-Assad was not on the agenda. Putin also revealed that 50 UAVs launched by militants were downed near the Russian military base in Khmeimim.

Furthermore, Putin said that Russia reserves its right to help eradicate terrorists in Idlib, should they continue with provocations and block establishment of a demilitarized zone there. The President noted that he had informed his “colleagues” about the situation and that artillery strikes on some targets had already been carried out.

Hay’at Tahrir al-Sham (HTS), Jaysh al-Izza and Horas al-Din are the core of the groups, who are constantly violating the demilitarization agreement by shelling government targets in Aleppo, Lattakia, Hama and Idlib. On October 27th, Zubair al-Turkmani, a military commander of HTS in the Aleppo countryside, confirmed that the militants had shelled Syrian Arab Army troops near the town of Khan Tuman.

On the same day, Turkish outlet Yeni Safak cited the White Helmets “rescue group”, which claimed that Syrian government forces and “Iranian-supported terror groups” had breached the ceasefire agreement and carried out attacks on the village of Raffa in the Idlib deconfliction zone. The attacks reportedly left seven civilians dead, three of them children.

The SDF released a statement regarding the October 27th incident claiming that only 14 of its fighters had been killed. The SDF also claimed that it has lost no positions in the Euphrates Valley. However, on October 28 and October 29 clashes in the area continued with ISIS units carrying out more offensive actions.

On October 28th, the ISIS news agency Amaq reported that a suicide vehicle-borne improvised explosive device (SVBIED) belonging to ISIS targeted a convoy of the US-led coalition and the Syrian Democratic Forces (SDF) on the road between the town of al-Shuhayl and the Omar oil fields. Local sources confirmed Amaq’s report. There have been no numbers of casualties released, a local Syrian outlet however claimed that several SDF fighters had been killed or injured.

Separately, the Turkish Armed Forces (TAF) carried out a series of artillery strikes on SDF positions, mostly its Kurdish formations, near the Syrian city of Ayn al-Arab, also known as Kobani. The TAF activity followed a fresh round of threats by the Turkish President that they intend to kick off a military operation in northern Syria to eliminate Kurdish armed groups, who are considered by Ankara as terrorists.