Health Editor’s Note:  There is now a vaccine to protect animals from plague (yersinia pestis/pneumonic plague) and anthrax.  More testing will be performed to bring these vaccines to the level to be used for humans.  Remember, biological warfare often uses anthrax, often in packages or letters, and there are many more bacterias and viruses that can be weaponized.  Having vaccines for at least two of these diseases would be lifesaving, but only as long as anthrax and/or plague is used. Everyone (meaning all countries and governments) should put away their bacterias and viruses and stop the thoughts/threats of using them for evil. The diseases themselves are horrible enough, without intentionally using them to harm …Carol 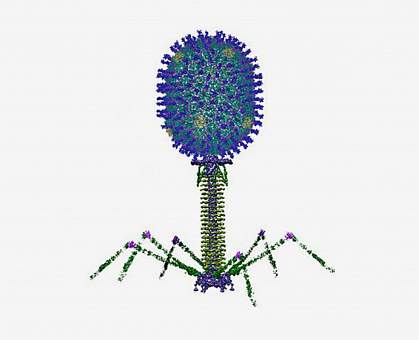 Illustration of antigen molecules (blue) fused onto the head of a T4 phage (a type of virus).Tao et al., mBio

Certain microbes pose a risk to national security because a terrorist could release them to infect and sicken the public. The bacterium that causes anthrax (Bacillus anthracis) is the one most likely to be used in a bioterror attack. In 2001, five of 22 people died after becoming infected by anthrax spores delivered in letters. Another high-risk microbe and proven biothreat agent is the one that causes plague (Yersinia pestis). Anthrax or plague can cause death within several days if they’re not treated right away with antibiotics.

NIH-supported scientists are developing vaccines to help prepare for bioterror attacks. A vaccine teaches the immune system to recognize and neutralize a bacterium or virus. “Subunit vaccines” use only a part of the microbe to stimulate the immune system. Including only an immune-stimulating subunit, known as an antigen, lowers the chance of unwanted side effects.

A research team led by Dr. Venigalla B. Rao of Catholic University and Dr. Ashok K. Chopra of the University of Texas Medical Branch set out to develop a subunit vaccine to protect against anthrax and plague. Drs. Stephen Leppla and Mahtab Moayeri of NIH’s National Institute of Allergy and Infectious Diseases (NIAID) also contributed to the project. The work was supported by NIAID and published in mBio on October 16, 2018.

The scientists fused anthrax and plague antigens to the head, or capsid, of particles of a virus called phage T4. The many antigens on the head of the phage resembled the repeating patterns on a natural virus. Then they tested whether the immune system of lab animals would interact with the antigen-bearing phage T4 vaccine. They injected the vaccine into mice and followed up with a booster shot on day 21. Control mice received injections of phage T4 without antigen.

Blood tests showed that immunized mice made protective molecules called antibodies against the antigens. The research team then exposed the mice to anthrax lethal toxin (LeTx) and plague bacteria. All control mice died within 2 to 4 days, but most of the immunized mice were protected. Of 10 mice exposed first to LeTx and then to plague, eight survived. Of eight mice exposed to both at once, seven survived. The surviving immunized mice cleared infection within 3 days.

Next, the researchers tested the vaccine with rabbits. Two weeks after the booster shot, 10 immunized rabbits received a lethal dose of anthrax spores through a mask covering their nose and mouth. All the immunized rabbits formed neutralizing antibodies and were protected while control rabbits died within 2 to 4 days.

“In the future, this vaccine platform could provide a convenient way of mass vaccination against several pathogens,” Rao says.