Pravda: “Military Industrial Courier” published an article by Maxim Klimov, in which he assures that the “partners” “are working out with might and main the new methods of detecting submarines.” Thus, submarine officers from Severomorsk imposed the flight path of the American reconnaissance ship Orion on the map of the location of our nuclear submarines during the exercises. And all ten turning points of his route were right on the locations of our boats, the author writes. “That is, Orion went out without any tacks exactly on our submarine, dumped the buoy and went to the next one.”

Maxim Klimov points out that Russian submarine nuclear-powered submarines with ballistic missiles (SSBNs) are not invulnerable and do not fulfill their complementary role in the triad of nuclear deterrence . The author, pointing out the shortcomings of the Russian submarine fleet: low noise reduction, poor assortment of rocket ammunition, poor anti-torpedo protection, concludes that submarines must be completely different, and while existing production is closed and reoriented to the construction of the surface fleet.

However, in foreign analytics, we meet the opposite opinion about the Russian SSBNs. So, military experts of the Military Watch edition consider the Yasen SSBNs to be the most promising ship of their class in the world with unlimited range and “ability to carry up to 40 Caliber cruise missiles and X-101 along with torpedoes” Experts praise the Varshavyanka project boat, which received the nickname “Black Hole” due to its “noiselessness”.

Military Watch analysts point out that the capabilities of Russian shipbuilding will continue to be improved with the launch of the new fifth- generation submarines of the Husky project and atomic unmanned submarines.

To understand the situation with the Russian submarine fleet “Pravde.Ru” helped submariner, chief editor of the site “Avtonomka” Alexander Viktorov. 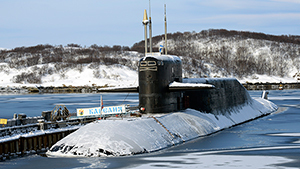 12 PHOTOSRussia celebrates the Day of the submariner

– How are things going with the low noise of submarines – the main factor of their survival?

– The quietness of a submarine is a relative concept. It all depends on the means of detecting the enemy. If buoy systems are used that are dropped from aircraft and are capable of detecting noise with the subsequent transfer of operational information about the location of the submarine, the detection rate is very high.

There is also the US stationary sonar detection system SOSUS, which is located throughout the World Ocean.

This is a philosophical question – in the plane of technology, or information leaks, or tactics, or something else.

– The most important thing for a strategic submarine is to make a volley before they find it. This is achieved in various ways. Low noise is one of the criteria.

But we had boats that were called “roaring cows”, they “roared” to half of the ocean, but nevertheless were able to shoot cruise missiles and hit the target.

We have Varshavyanka diesel boats, they are considered low noise, because they go under water on motors – these are diesel electric submarines. There are nuclear submarines that go under water on a turbine launched through an atomic nuclear reactor. Of course, they make more noise, but this, again, is relative.

We do not have so many post-Soviet submarines – the Alexander Nevsky and the Yuri Dolgoruky. And then – these are some hybrids of all that was invented in the Soviet era. That is, cardinally nothing has changed in their design, and detection devices — naturally, they went ahead with us and with the likely adversary too.

The author of the Military Industrial Courier was given the task to write an article in which he had to exacerbate the problem a little. The situation described is not a disaster, but we will not solve all the problems in one day. Any ship is built long enough. Especially in our time, when almost the entire construction cycle is tied to only one shipyard. And before that, the entire Soviet Union worked on construction.

– The author of the article in the Military-Industrial Courier writes that NATO reconnaissance aircraft repeat the trajectories of our Russian submarine, and concludes that the enemy has new tracking systems for submarines, and we are lagging behind.

– For many years of scouting submarines, reconnaissance aircraft learned by heart the routes of their withdrawal from the bases of the Northern Fleet to the Atlantic Ocean. They are about the same. Plus or minus – 20 miles. They know where to look for our submarines.

But it is not a fact that they found them. They can just fly there just in case. The boat goes at a speed of 30 knots, and the plane flies at a speed of 400-500 kilometers per hour. These are incomparable speeds. It is like saying: “Our aircraft are following horse-drawn carts on the roads of the country.”

When I served in Kamchatka, flights of the American base patrol aviation almost always repeated our maneuvers. We were flown both in the surface and underwater for a number of years. Therefore, they have accumulated an array of information on where the noises were found and whether they often coincide with the fairway, that is, the greatest depths, allowing to go to a safe depth in a submerged position.

– So there should be an impetus for the development of new devices?

– Of course, it should be. Why did we have at one time submarines, whose immersion depth increased to 600 meters – a kilometer? Because the enemy had torpedoes with which it was possible to work at a depth of 400 meters. That is, being at a depth of 600 meters, one could feel invulnerable.

US Admiral: The second fleet is ready to sink the Russians in the Atlantic

Americans are depressed: the Russians have an “awesome” submarine fleet