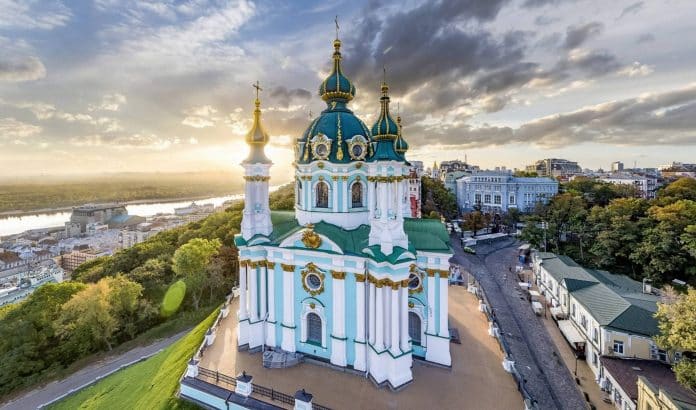 By Miodrag Lazarevic for Veterans Today/Serbia

How Constantinople changed the Orthodox World

This decision has already led to large-scale changes in Ukraine and the Orthodox world. So, what’s happening?

The first thing the Ukrainians did was redistributing property. A part of the deal between the Ecumenical Patriarchate and Ukrainian President Petro Poroshenko on Autocephaly was a number of real estate items in the center of Kyiv. As it is rumored, Metropolitan Emmanuel of France visited the country to review the objects; their size and value quite impressed him.

On October 18, Ukraine’s Verkhovna Rada passed the President’s bill on handing St. Andrew’s Church in Kyiv to the Ecumenical Patriarchate. Up to that moment the church served as the UAOC’s cathedral but its primate Metropolitan Makarios supported the presidential decision since his organization will be part of the new united Ukrainian Church and he is ready to sacrifice for it.

Meanwhile the UOC KP is getting ready to obtain new real estate items. On October 20, the Synod changed the title of its head: now he will also be the “Holy Archimandrite of the Kyiv-Pechersk and Pochaiv Lavras”, which belong to the UOC MP. On the eve of elections, Filaret seems to demonstrate his supremacy before Makarios and the UOC MP. As it is known, the UOC KP and UAOC are in long-lasting conflict, which escalated since the Tomos will be granted shortly.

The UOC MP certainly is in no haste to recognize Constantinople’s decision: the clergy of a few large eparchies of the Moscow Patriarchate vote for Metropolitan Onufriy and against the Tomos. Met Onufriy openly claims that the Phanar’s actions are uncanonical and calls for defending the faith. Bishops won’t join the new Church without their clergy and dioceses.

For instance, in predominantly anti-Russian Rivne Oblast in western Ukraine, all the clergy and monks unilaterally supported Met. Onufriy.

At a voting by secret ballot in Odessa Diocese, only 3 (!) priests of 406 were against Met Onufriy.

Metropolitan Sofronios of Cherkasy was the only bishop of UOC MP dioceses who openly supported Autocephaly. Cherkasy Diocese’s voting by secret ballot showed that nearly all of the local clergy deprecate the Autocephaly. Facing criticism, Met Sofronios had to publically state that he “won’t join the same Church with Filaret.”

In case Filaret and Makarios don’t reconcile and UOC MP bishops stand aside, the Unification Council will fail. The only result yielded by the Ecumenical Patriarchate’s strategy would be an exarchate and valuable property in the center of Kyiv. But where is the promised unity of the Ukrainian Church?

The world: a schism, the declining authority of the Greek Orthodoxy and the Ecumenical Patriarch

The Ecumenical Patriarchate has failed to reach concord in the world Orthodoxy. It is starting to divide into two camps. Despite the cut ties, Moscow couldn’t be isolated: the Patriarchates of Alexandria, Antioch and Slavic Churches are against Constantinople’s hasty actions on the Ukrainian question and the conflict is expected to be universal.

Such stand-offs can’t foster the positions of the Greek Orthodoxy. Constant quarrels between the Local Churches undermines the authority of the Orthodox Church in the eyes of Roman Catholics and Protestants: the Greek Orthodoxy once again looks ridiculous.

The ambiguous events influencing the Ecumenical Patriarchate’s reputation also added oil to the fire. First, the contents of the confidential talks on August 31 with Patriarch Kirill were leaked. The negotiations were recorded only by Constantinople’s representative, so it couldn’t have been published without prior consent of Patriarch Bartholomew.

Second, according to many sources, Ukrainian President Petro Poroshenko allegedly donated to the Phanar $25 million collected from Ukrainian oligarchs. In the official photos of the meeting between Rostislav Pavlenko, the former Deputy Head of the Presidential Administration, there stands a big case near His All-Holiness. In Ukraine, this caused a furious reaction, and there were attempts to initiate a corruption probe against Patriarch Bartholomew and President Poroshenko.

Recently, there broke a scandal related to the Autocephaly that could be possibly granted to the Macedonian Orthodox Church. As a Greek newspaper claimed, the delegation of the Serbian Orthodox Church (Macedonia doesn’t want to stay under its jurisdiction) came to Istanbul and presented a rich donation to the Ecumenical Patriarchate, after which Constantinople allegedly refused to bestow the Tomos to Macedonia. Surely, the Phanar immediately published a refutation.

On top of all, the Ecumenical Patriarch is quite aggressive toward the Russian Orthodox Church without presenting grounds for his accusations. Thus, he has recently blamed Moscow for the dissemination of “well-paid articles” and “black propaganda” without clarifying what he meant.

Obviously, a series of scandals and aggression toward other Churches negatively affects Bartholomew’s reputation. Moreover, it looks like the Ecumenical Patriarchate strives not for the Unity of the world Orthodoxy but for its own supremacy over other Churches.

There should be recalled the situation with the “pearl in Constantinople’s crown” – the Greek Orthodox Archdiocese of America (GOA). In summer, some of its influential supporters spoke about independency following the example of Ukraine, but these talks were cut off. Meanwhile, for several months the Phanar has been trying to displace Archbishop Dimitrios. Against the background of the Ukrainian Autocephaly and open war with Moscow, the attempts to restrict the GOA’s independence and kick out its primate look cynical. Otherwise, it can urge the Archdiocese’s clergy and laity to unite for independency.

Relations with the ROC: the future of the ecumenical dialogue in question

The rupture between the Russian Orthodox Church and the Ecumenical Patriarchate has influenced not only the processes between the two Churches. In cooperation with the ROC, Constantinople conducted active inter-confessional negotiations, but since Moscow refused to take part in them, the future of the relations, first of all with Roman Catholics, are not that promising. Now the talks led by Constantinople won’t be all-Orthodox, and this can be a pretext for predominantly anti-Ecumenical Churches to abandon them.

Besides, the Phanar’s actions will affect the Orthodox Diaspora: without the ROC, the Assemblies of Bishops won’t be that effective, their activity can stall.

At this moment, it’s unclear what awaits us in the future but one thing is obvious: the Orthodox world has changed and it will never be the same. Yes, Constantinople has won in the battle for supremacy becoming “the first without equals.” But the price is too high.