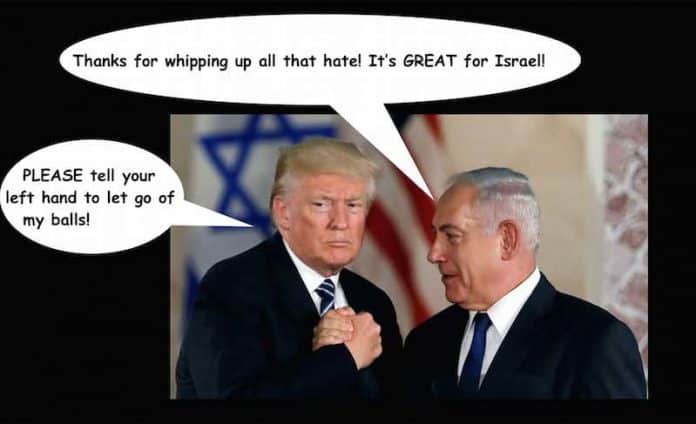 When Bibi Netanyahu first heard the tragic news from America, he was asked his reaction. Bibi smirked and barked out: “It’s very good!”

Then a faint light of awareness dawned in his beady little pig eyes: an understanding of how bad that sounded. So he caught himself and said: “Uh…well, it isn’t good…but it’s good for Israel!”

That was Bibi’s reaction to 9/11. But it also represents his likely response to the Pittsburgh synagogue massacre.

Netanyahu is a gangster. “Israel” is a global shakedown racket. The so-called state of Israel is in fact a huge river of dirty money flowing into Occupied Palestine. That money is literally “scared up” all over the world by Jews who are terrorized into believing that the Zio gangster state is all that is standing between them and a new set of gas chambers.

In fact, American Jews don’t even have any good reason to support US wars for Israel. Polls show that American Jews, more than any other US ethnic group, oppose the 9/11-triggered terror wars on Israel’s enemies.

That’s right: If it were up to American Jews, we’d be 7 trillion dollars richer, and 32 million Muslims would be still alive.

So Netanyahu’s gangster state has one overwhelmingly difficult “national security” imperative: Terrorize the world’s Jews, or at least enough of the rich and powerful ones, into maintaining the money flow. That issue is existential. Everything else is just details.

The State of Israel has an atrocious record of committing horrific acts of terrorism against Jews all over the world to scare up warm bodies and support for Zionism. Thomas Saurez’s State of Terror: How Terrorism Created Modern Israel (read my review HERE) shows that Jews were the number one target of Zionist terrorists during Israel’s formative period. The Zionists repeatedly sank ships killing hundreds of Jewish refugees at a time. They bombed and massacred Jews in Iraq, and terrorized Jewish communities in Morocco. Both of these ancient Jewish communities were genocidally destroyed by Israeli Zionists.

And speaking of Zionist genocide against Jews:

More recently, the massacre of Jews in a Paris deli shortly after the Charlie Hebdo events appears to have been part of a false flag run by Israel and its French assets. For details on why this event qualifies as a strongly suspected false flag, see my edited book We Are NOT Charlie Hebdo. Then listen to top Israeli investigative journalist Barry Chamish, who suspiciously died shortly after beginning to talk about these matters, blame the Charlie Hebdo terror events on Netanyahu.

Another recent false flag out of Israel, designed to scare up support for Israel, was Michael Kadar and his Shin Bet Uncle Mordecai’s 2017 series of death threats targeting American Jewish organizations. The US media blamed those threats on “anti-Semitism.” After Kadar was arrested, and the affair revealed as a false flag, that same media skulked in silence. The liberal Jews who dominate US media may not agree with their Likudnik cousins, but they sure do cover for them! I suppose it’s like having a crazy semi-lovable uncle who happens to be a serial rapist: Denial is a river in Egypt and an eventual border of Greater Israel. So thanks to our non-Likud but still culpable liberal media, most Americans are undoubtedly still under the impression that Kadar’s crime spree was perpetrated by “anti-Semites” rather than by the actual perpetrator, the State of Israel.

This just in from VT Editor Ian Greenhalgh:

I noticed this article in Haaretz today:

This suggests to me that the Pittsburgh shooting may have been an Israeli op – Netanyahu obviously wanted to take the heat off MBS.The Khashoggi murder was dominating the news almost to the exclusion of all else, then 11 Jews get ‘shot’ and the name Khashoggi is virtually gone from the media.

A series of troubling coincidences appear to connect Debbie Wasserman Schultz, Broward County, Florida and Chabad Jewry to recent attacks in America. This raises the question whether Broward has somehow become the epicenter of false flag events.

A brief effort at connecting some dots indicates this is a possibility:

“Also, one of the rabbis at the Pittsburgh synagogue, Alvin Berkun, has a son, Jonathan Berkun, who is the rabbi at a synagogue in Aventura, Florida—the same city the fake mail bomber is from.  His synagogue participated in a bomb plot psyop in 2016. In addition, Jonathan Berkun’s wife Rabbi Lauren Berkun is the director of the Shalom Hartman Institute, a leading center for Jewish advocacy.  On its website, we see the Institute includes the Center for Israeli-Jewish Identity, and we are told this Center includes “senior officers in the Israeli Defense Forces”. Which tells us Mossad is probably involved in coordinating these fake events in the US. Given that, we may assume Rabbi David Hartman, the founder of the Institute, likely had ties to Israeli Intelligence back to the 1970s or before.  Hartman was an advisor to Zevulun Hammer, Israeli Minister of Education, and also to several Prime Ministers.”\3. https://rense.com//general96/FLvalentine.html

The reports by independent journalist Yoichi Shimatsu provide the broad context for what is happening in South Florida and elsewhere.\https://rense.com//Datapages/yoichidat.htm

The occurrence of a drill on or about the same time or place as an actual event means a red flag must immediately be displayed:
https://www.veteranstoday.com/2018/10/30/pittsburgh-shooting-evidence-of-false-flag-fakery-surfaces/\

It is impossible at this point to be certain about what happened in Pittsburgh last week and whether the official narrative is credible.  But the timing of the shooting so soon after the mail-bomb attacks and so close to the mid-term elections is very suspicious!  The research connecting DWS, Chabad and Broward County combined with previous alleged false flag attacks with a similar pattern invite a deeper look into these tragic events.

I encourage everyone who is troubled by this to move beyond name calling and fears of being labeled anti-Semitic to undertake their own investigation in a fearless search for the truth.