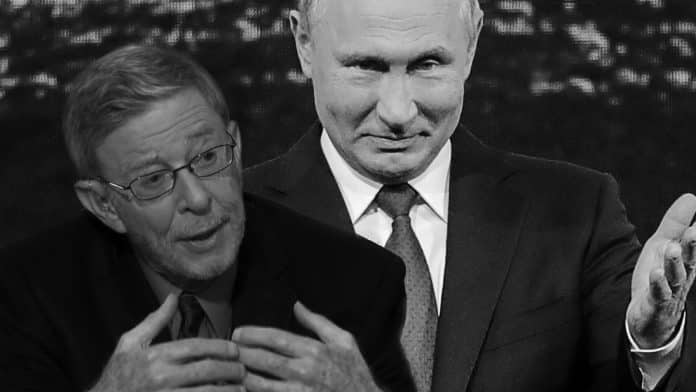 [ Editor’s Note: I always like to read Stephen Cohen, as I have never read a bit of hype or even fluff in his articles. He calls them like he sees them, but without skipping over the historical facts which have become en vogue to ignore at will if they do not fit in with one’s analysis.

VT contributor Dr. Eran Elhaik coined a wonderful phrase for describing this quirk, “They shoot the arrow and then paint the bullseye around it”.

It is rare to find a mention in corporate media of Clinton’s breaching the agreement not to move NATO eastward – a huge provocation. It was done at a time when Russia was being destabilized, with the Western cross hairs on it for eventually installing a puppet government, our real version of what spreading democracy means.

What I also like about Cohen is that he never gets any heat from the usual smear crowd gang that is always waiting in the wings for a reputation assassination job. Cohen reputation is virtually untouchable, so no one wants to make a fool of themselves for trying to take a cheap shot at him.

VT is in a similar situation in terms of anyone with a reputation to lose taking us on, as our standard reply is usually “let’s have a long public debate, all of it taped, with permission for both parties to use the material unedited as they see fit”. They never accept that, so no one with a reputation to lose will debate us on the red line issues.

Cohen destroys the US war hawks’ claim of Russian aggression, when it is exactly the opposite. The Georgian War showed how weak the Russian military had decayed, while all available monies were going into building the Russian civilian economy after its having been looted by the criminal oligarchs.

All Russia has done is to carefully rebuild its defensive and deterrent military capability, while keep the civilian economy growing at the same time. It is now hated by the war hawks, not as a threat, but as an example that US aggression can be successfully stood up to – a threat the war hawks deem the most dangerous, not to the American people, but to themselves … Jim W. Dean ]

Stephen Cohen elaborates on the following points regarding Trump’s decision to withdraw from the Intermediate-Range Nuclear Forces Treaty, signed by the US and (Soviet) Russia in 1987.

– For whatever reasons, both leaders at the time, President Ronald Reagan and Soviet General Secretary Mikhail Gorbachev, had developed a deep personal fear of nuclear weapons.

After agreeing in principle, though informally, in February 1986 that all nuclear weapons should be eliminated, the following year they abolished an entire category of those instruments of mass destruction: nuclear-warhead–bearing missiles with a range of some 500–5,500 kilometers. 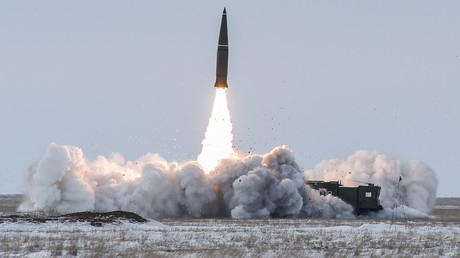 US’ ultimate goal is to strip Russia of its nukes

– The INF Treaty was focused on Europe, which was targeted by Soviet missiles and which was where US counter-missiles were based. It was a major step in a diplomatic process of grand détente that both Reagan and Gorbachev thought would end the Cold War and nuclear arms races forever.

The treaty’s larger significance is that it was the first, and still only, act of nuclear abolitionism – until now, a historic 31-year tangible symbol of what more could, and should, be possible.

– If carried out, however, Trump’s decision relegates the historic INF Treaty to the status of just another failed or discarded international agreement.

Trump gave two reasons for nullifying the INF Treaty: Russia has been violating the agreement by developing a new intermediate-range “cruise” missile; and China, which was not a party to the treaty, has been developing its own arsenal of such weapons.

There is some truth in both allegations, though none that would have ruled out negotiations to revise, expand, and preserve the treaty. But there was a larger truth that went unmentioned by Trump and by virtually all of the US commentary on his decision.

In 2002, President George W. Bush unilaterally withdrew the US from the 1972 Anti-Ballistic Missile Treaty, which prohibited the deployment of missile-defense installations. That prohibition had preserved the certainty of Mutual Assured Destruction in the event of one side launching a first strike, and it kept the nuclear peace since the onset of the nuclear age.

Within a few years, Washington made missile-defense deployment a NATO project and thus its installations accompanied NATO expansion, on land and sea, to Russia’s borders. Still more, those installments are not only a “defensive” system.

As MIT Professor Theodore Postol and others have shown, US-NATO missile-defense installments near Russia now have the capacity to launch intermediate-range “cruise”missiles. 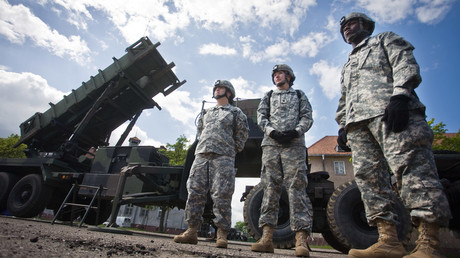 Business as usual: US INF pullout will delight arms industry as it threatens to reignite Cold War

– Moscow has been fully aware of this capacity for years and has repeatedly complained to Washington that it violates the INF Treaty. Washington ignored the complaints, and, not surprisingly, Moscow began developing its own new version of intermediate-range missiles.

Herein lies the causal dynamic of the new US-Russian Cold War. Washington provokes, Moscow reacts, and the cycle becomes self-perpetuating. Reagan and Gorbachev thought they had broken this fateful, then forty-year cycle, in 1987, by undertaking mutual military build-downs and an act of nuclear abolitionism. Looking back from today’s perspective, they failed. And Gorbachev, now 87, watches as yet another of his historic legacies is undone by his successors, mostly American ones.

What now? The INF Treaty requires six months’ notice prior to withdrawal, so formally there is time for diplomacy to save some version of this historic agreement. (We do not know what role Russiagate allegations that Trump is a “Kremlin puppet” played in his decision, among other possible factors.) Trump and Putin are scheduled to meet in Paris, and possibly in Argentina, in November, and the subject will certainly be on their agenda, though a reversal of Trump’s decision seems unlikely.

– As Cohen has pointed out before, a new nuclear arms race has been under way for some time. Obviously, the abolition of the INF Treaty can only accelerate it on both sides.

– Nuclear weapons, like war itself, are ultimately about politics. And Trump’s decision will have important political consequences in both capitals. Clearly, it is a budgetary “victory” for the military-industrial complexes on both sides. Each is ever eager to develop, test, and deploy new weapons systems.

– It is also a political victory for “hawks” in Washington, for those like John Bolton, Trump’s national security adviser, who oppose any constraints on American power, and for their counterparts in Moscow. Russia’s “hawks” now have an additional argument against the kind of “cooperation with our American partners” that Russian President Putin continues to preach. Washington has now exited or violated yet another international agreement, all of which involved Russia and some crucially.

Clinton broke a promise made to Gorbachev by his predecessor that NATO would not expand eastward. Bush unilaterally nullified the ABM Treaty. Trump has quit the international climate treaty, the agreement with Iran regarding nuclear weapons, and now the INF Treaty. Moscow is unlikely to have any more illusions about Trump, but Russia’s “hawks” now have an argument that transcends any American president: the United States cannot be trusted to honor its agreements, certainly not in the long run.

– Trump’s decision could also affect American politics. It might revive the once important but long dormant, or dead, anti-nuke movement in grassroots politics. It might re-direct Democratic and other opposition to Trump from largely bogus Russiagate allegations to actual substantive issues like the danger of nuclear war. Nor should we forget that more than two years of Russisagate allegations, which have demonized both Trump and “Putin’s Russia,” have probably made it easier, if not tempting, for Trump to quit the INF Treaty.

But the biggest political fallout will almost certainly be in Europe, which was the focal point of the original conflict over intermediate-range nuclear missiles. If Trump tries to deploy a new generation of such land-based weapons, where – within easy range of Russia – will they be based?

No Asian government will take them, but will any European ones, even NATO members, given the strategic risk and likelihood of mass political protests at home? If Trump proceeds, big political struggles lie ahead in Europe, struggles that could continue the drift of “US allies”away from Washington—possibly toward Moscow.

Stephen F. Cohen is a professor emeritus of Russian studies and politics at New York University and Princeton University and a contributing editor of The Nation.