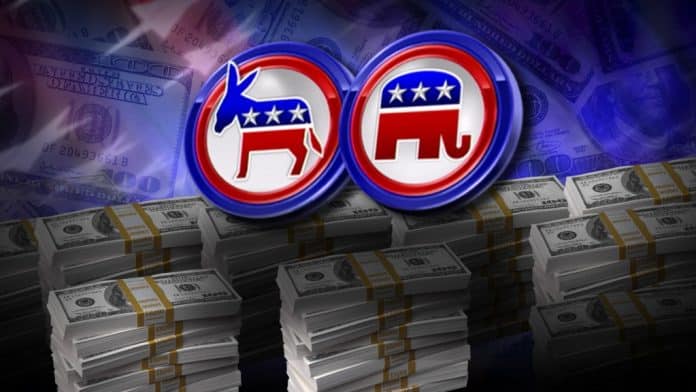 Notice: If you are an Arab, beware of entering a consulate, it can be dangerous to your life. These days it is dangerous to write anything about an Arab country, so I will stick to America.

We are a divided country more than any other time in history, perhaps since the Civil War. This election will and should decide whether we will go down further and deeper in our divisions, or we pick up the pieces and try to heal all the wounds and have a national reconciliation.

In a few days, Americans will go to the polling station and vote for all 350 members of the US House, one third of the Senate, and state and local offices around the country, marking this mid-term election as the most expensive in history, with estimates running at $5 Billion.

The average cost of running for a House seat is around $1.5 million for each candidate, with Senate seats costs running around $25 million per candidate. This is really lots of money to run for an office and of course with this kind of funding, the donors are the share and stockholders not those who votes. Our votes only put “their” candidates in office.

American democracy is kind of peculiar and unlike any other democracy in the world, with Israel becoming like the US, with rich powerful donors, lobbyists, corporations and special interest groups buying seats in the House or Senate.

Unlike other democracies with turnout topping 70%, America’s turnout is around 50-55%, which means that those winning seats are elected by a minority of eligible citizens.

This midterm election is a very special election determining and influencing the next two years of Trump’s presidency and his “Make America Great Again”, and should determine whether we can put an end to this White Nationalism, which is taking the country toward a new and more dangerous “civil war”.

The recent shooting in a Pittsburgh synagogue is a reminder that “White” American nationalism’s racism runs deep, taking a dangerous turn with the election of Donald Trump. While this is a classic anti-Semitism attack, Israel was quick to send ministers, even offering to send security experts presenting itsself as the “protector” of the Jews and claiming the international Jewish community as its own.

Though the attack on the synagogue is deemed a terrorist act and a violent form of Anti-Semitism, the Jews are not the only ones targeted for hate crimes. There are many with attacks on Muslims and mosques, on Blacks, and Black churches among others, and of course, many White attacks on schools, malls, etc.

American racial and racist history is shameful and criminal and has been directed toward Non-White Protestants, such as the Christian Catholics not long ago, directed against newly arriving East European Jews, against Italians, Portuguese and Spanish immigrants – add to that racism in its ugliest form, “slavery” of Blacks, that lasted for centuries.

The 2016 Trump campaign’s incitement against immigrants and Muslims and Brown people is what took him to the Oval Office and the US presidency, and inspired other “nationalistic” candidates in Hungry, Poland, even Brazil.

Racial incitements do not die away fast, and in this election they are given new life on the local, state and national level.

America this election is at a crossroads, and we shall see how it chooses to proceed with its future and the future of its citizens, not only WASPs and Christians of other denominations, but Jews, Muslims, Sikhs, Hindus, Latinos and Asians – and whether it chooses a different path – one of social harmony versus a more racial, ethnic and sectarian divide. The latter would set the stage for regional division of the country.

We were hoping that America overcame its racism in the 60s and matured into a multi-racial and multi-cultural dynamic society, but the Trump election changed all that.

I believe it is a waste of our time and money to spend hundreds of millions promoting democracies overseas when our democracy and our election process leaves a lot to be desired.

Unfortunately, the candidates hardly debate each other or meet in the same place at the same time, leaving advertising and special lobbies to form the message in 30-second ads, which are most of the time very misleading.

It is ironic that special interest groups and special donors pour millions of dollars into out-of-state campaigns, deciding the fate of the congressional district or the senate seat by outside forces.

What is needed most urgently now is for the voters to perform through the ballots what Congress certainly will fail to do – setting the term limits for senators at 2 terms, House at 5 terms, and members of the supreme court 12 years max. Yes, we can make a difference at the voting booth and reshape the Constitution to fit our needs and aspirations as American citizens without leaving a divided Congress controlled by big money and special interest groups.

We are a divided country more than any other time in history, perhaps since the Civil War, this election will and should decide whether we will go down further and deeper in our division, or pick up the pieces and try to heal all the wounds.