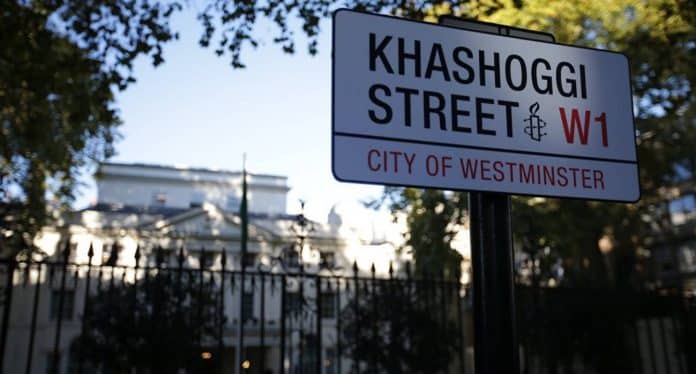 The death of Saudi journalist Jamal Khashoggi has caused a stir in the international community as Riyadh has been accused by Turkey of orchestrating the crime. Saudi Arabia confirmed that the man was killed inside its consulate in Istanbul, but denied claims that the murder was ordered by the country’s leadership.

Members of Amnesty International have put up a mock street sign on Curzon Street outside Saudi Arabia’s Embassy in London, “renaming” it “Khashoggi Street” in memory of the Saudi journalist, who was murdered a month ago. In a statement made following the “renaming,” the director of the UK’s chapter of Amnesty urged bringing those responsible for Khashoggi’s death to justice and accused Riyadh of eliminating critics and activists.

Although Saudi Arabia has admitted that the journalist was murdered inside the consulate in Istanbul, it denied accusations that Khashoggi’s killing had been organized at the highest level. Riyadh assured that it is conducting a thorough investigation into the matter and announced that some 18 Saudi citizens had already been arrested in connection with the case.

At the same time, Turkey is conducting its own parallel investigation into the journalist’s murder, while staying in contact with their Saudi colleagues and exchanging information. Turkey’s president has urged Saudi Arabia to conduct its investigation transparently and explain to certain peculiar details in the case.