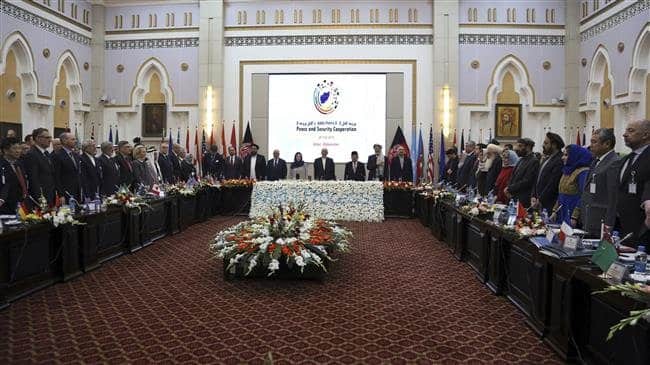 [ Editor’s Note: This move is quite a rebuke to the US who always wants to be the deal maker and breaker, so that reality is carved in stone for others to see. Silly me, I have always viewed that attitude as a poor representation of “spreading freedom and democracy”.

The silver lining in this recent peace talk move is that a dozen surrounding regional countries are attending, and that means they understand that peaceful development of Afghanistan, in a way which benefits all parties, is the only glue that can hold a peace deal together, especially when rogue state sponsored terrorists are running around all over the world looking for their next destabilization job.

VT wishes the long suffering people of Afghanistan best wishes in finding a political solution to their problems, that will be followed by and economic one. The Afghan leaders I sense do not want to be in the US pocket, but prefer to work with all the regional countries to maximize infrastructure investment.

As always, the challenge for the current Afghan government would be to end the looting of the country via corrupt government, and for the Taliban, adopting a more modern approach to their future. Businesses are not looking for Medieval mindset partners.

Not only is illiteracy a huge problem in the country, but considered a cultural institution by the religious extremists. The key to bringing them on board is to pay them off as they have a problem with real work, other than bossing everyone else around… Jim W. Dean ]

Russia says Afghan President Ashraf Ghani has agreed to send a group of senior officials to a long-awaited summit in Moscow, where they will sit down with a delegation of the Taliban.

Russia’s foreign ministry said in a statement on Saturday that Kabul agreed to hold talks on November 9.

“It will be the first time that a delegation from the Taliban’s political office in Doha will attend such a high-level international meeting,” said the ministry.

Foreign ministry spokeswoman Maria Zakha­rova told reporters at a briefing on Thursday that the date and list of participants were being finalized, but that Moscow wanted to be absolutely sure before any public announcement.

Zakha­rova also said she hoped to be able to announce details of the conference “in the coming days.”

Russian foreign ministry also invited representatives from 12 countries, including India, Pakistan, China and the United States to attend the summit in Moscow.

The meeting was once postponed in September after President Ghani rejected the invitation. He argued that any talks with the militant group should be led by his government. The United States had also declined to attend.

“We requested Russia to cancel the summit because talking to the Taliban at multiple forums will further complicate the peace process backed by the US, but they rejected the request,” a senior Afghan official who had been holding discussions with Russia said formerly.

Among the Afghan diplomats invited to the summit were former Afghan President Hamid Karzai, their aides, and other leading politicians with ties to the Afghan government.

“Karzai will travel to Moscow because any opportunity for peace talks with the Taliban must not be ignored,” said Mohammad Yusuf Saha, a spokesman for the former president, who ran the country for 13 years following the overthrow of the Taliban in 2001.

Senior Taliban members in Afghanistan also confirmed that they would send a delegation to the Russian capital, because, they said, the meeting would give them an opportunity to engage with neighboring countries who are also invited to the summit.

The Taliban have so far been insisting on negotiating only with the United States, saying they will not enter talks if US troops leave the country; otherwise, they will make Afghanistan “another graveyard” for foreign forces.

The peace process gained a momentum last month when the US sent Zalmay Khalilzad, Washington’s special envoy for peace in Afghanistan, to Qatar where he held talks with Taliban leaders.

A report says US special envoy for Afghanistan reconciliation efforts meets with the Taliban officials in Qatar.

Before the Qatar meeting, Khalilzad met with Ghani in Kabul. He also held talks with Chief Executive Abdullah Abdullah, as well as representatives of a variety of political groups, key civil society organizations including the High Peace Council, and Afghan media, the US embassy in Kabul said back then.

Atta Mohammad Noor, former governor of the strategic Balkh province, who is a powerful figure among Afghanistan’s ethnic Tajiks said he would also attend the Moscow summit.

He said many Afghans have now realized that “a single fixed formula prescribed by one foreign power will not help Afghans attain peace.”

The Taliban group’s five-year rule over at least three quarters of Afghanistan came to an end following the US invasion in October 2001 but 17 years on, Washington is seeking truce with the militants as it prepares for a long haul in the country.