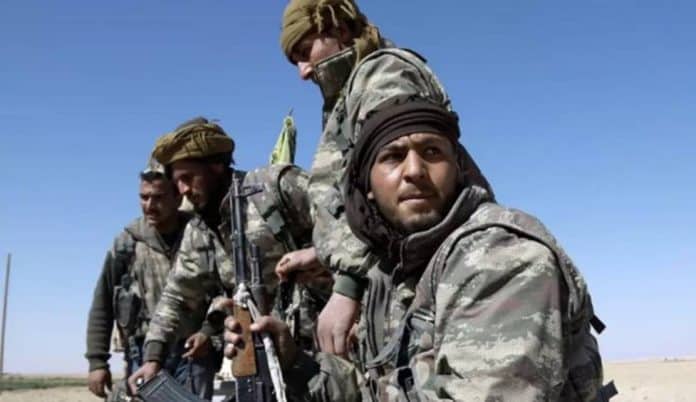 TEHRAN (FNA)- The Syrian Democratic Forces (SDF) withdrew from their positions after the US refused to support them in ISIL attacks and Turkey increased military operations against them.

Field sources in Eastern Syria reported on Wednesday that the SDF had retreated from its strongholds near the town of al-Baqouz near the Syrian-Iraqi borders in Southeastern Deir Ezzur towards the US base in al-Tanak oil field.

Meantime, the SDF announced in a statement that they have stopped operations against the ISIL in Eastern Euphrates temporarily after the Turkish army intensified attacks against the Kurds in Northern Syria.

They claimed that Turkey’s attacks in Northern Syria and the ISIL offensives in Hajin region in Southeastern Deir Ezzur were coordinated, adding that they “will stop their anti-ISIL operations for a long time”.

The SDF withdrew from the borders with Iraq after the US fighter jets did not support them in recent attacks by the ISIL against their positions in Southeastern Deir Ezzur.

Local sources in Eastern Syria had disclosed last week that the US forces’ backup for ISIL had enabled the terrorists to recapture the entire lands they had lost to the SDF in Eastern Deir Ezzur in the last 2 months.

The Arabic-language website of RT quoted the sources as disclosing that in complete absence of the US-led coalition forces to support the Washington-backed SDF to counter ISIL’s heavy offensive, the terrorists managed to recapture the small but key towns of al-Sousah and al-Baqouz in Southeastern Deir Ezzur.

It pointed to ISIL’s control over al-Baqouz Foqani, and said that ISIL has in the last two days recaptured all the territory it had lost to the SDF in past one and a half months.

The Syrian army discovered a large number of weapons and military equipment, including US-made arms, at ISIL strongholds during cleansing operations in Eastern Deir Ezzur.

Military sources said the Syrian army forces have discovered 450,000 rounds of US-made machine-gun bullets among the weapons and equipment.

Despite Washington’s attempts to deny its role in supporting the terrorist groups in Syria, the army regularly finds US-made weapons in militants’ strongholds.

In a relevant development last Saturday, the Syrian army discovered a large volume of US and Israeli arms, ammunition and medicines in clean-up operation in the newly-freed Quneitra province.

The army’s engineering units carried out clean-up operations in the villages of Bariqah, Ba’ar Ajam, Rasm Sanad in Southern and Western Quneitra province and found a large volume of arms and ammunitions and other military equipment.

Cannons, mortar launchers, anti-tank missiles, drones, the US-made missiles and Israeli arms and noise-making devices were among the discovered equipment.

A large volume of medicines, ambulances and trucks, mostly manufactured in the western states, were also found in the terrorists’ positions in Quneitra province.