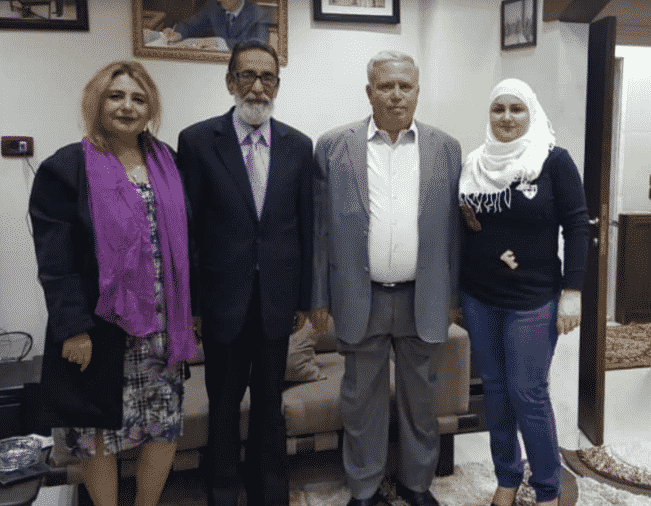 The Syrian Constitution Must be a Creation of the Syrian People

Some countries over the last few years, the years in which Syria witnessed a war in the face of terrorism of which human history has never seen, have not provided direct support, material and moral to the Syrian people, but have armed terrorist gangs that came from all parts of the globe. Support for these terrorist gangs has come with financing, weapons, and logistical information. Outside support has facilitated the movement of terrorists between several countries without hindrances, even in providing a cover for the leaders of these gangs. All of this has led to increased weakness of international law and a decrease in its credibility.

The United Nations and its agencies have become a safe haven for the leaders of the terrorist gangs, moving from one forum to another international forum without any difficulty. Thus, the UN and its agencies were given false legitimacy without regard to the will of the Syrian people.

The reality that the whole world sees proves beyond a shadow of a doubt that these killers represent only those who would systematically destroy the state…But despite all the above, and after terrorist projects in our country have not stopped but has taken a more active role in the internal affairs of the state.  It can achieve something that it has not been able to achieve during the last years of the Syrian crisis.  This does not mean that it is an internal matter.  The Charter of the United Nations and the international norms for other countries, who do not know the opinions of the Syrian people, should not assume the will of the people of whom they would offer trusteeship for.

A good example of this is the fact that some of us have been racing to intervene to draft a new constitution for the Syrian Arab Republic. However, Syria is governed by constitutions that have been in force since 1919, from the countries of the Middle East and before the birth of some European countries.

This happens at a time when some countries of the region still have no constitution in the true sense but are governed by absolute monarchies as they were in the Middle Ages, or they are governed by tribal leadership.

There has been a great deal of talk about the draft constitution that has been in place for the last few months, especially after most of the Syrian territory has been cleared of terrorism. Some countries that have supported terrorism throughout the years have forgotten their despair by interfering with the constitution. And, of course, it does so not out of concern for the interests of the Syrian people, not because it wants to replace the existing constitution with an even greater detail, but because it is trying to reap something that is could not achieve by force of arms when it supported terrorism.

We must now understand from the above that we stand for a new constitution in Syria as long as it will be better than the existing. We hope for a step toward a better reform, one that will move Syria toward better times.  The Syrian peoples’ concerns are for what the relationship some countries have to Syria and why these countries would want to insert themselves in the subject of the Syrian Constitution, which is an internal absolute sovereign state”?  Did we see officials of those countries who have unleashed their statements in this regard on the Syrian Constitution in force?  Have they established a simple comparison between this Constitution and the Constitution in force in their country?  I can say categorically that most of them did not even task themselves to look at the current Syrian Constitution, even if they were already briefed on it. If they had taken the time to look at the current constitution, they would have been more careful in making those changes.

What is important to understand is that the Syrian Citizen is the decision maker, and that the Syrian People are sovereign, and that they alone have the right to choose who represents them in drafting the Constitution, and they alone will approve or reject this Constitution. Syrians do not consent that others, from other countries, will impose dictates from abroad. It is the Syrian citizen who will go to the ballot boxes, whether he or she supports the draft constitution or rejects it.  In either case, Syrian citizens will agree or refuse as they see fit, and not because another state or country wants the Syrian citizen to agree or reject.

The most important assumption that must be addressed is the desire of the opposition to put specific names in the Constitution Drafting Committee, which is what Mr. Staffan de Misttura wants for the so called UN experts on the Constitution Committee and the common denominator among them is that they have not resided in Syria for years, and most of them do not know anything about Syrians, the Syrian people, or their political, economic, or social conditions. All the UN experts want is to come up with projects prepared for them in advance, regardless of whether these projects are suitable or inappropriate. The UN experts do not acknowledge the lesson of historical experiences which prove that the Constitution of a certain state cannot impose rules from abroad, and that what is good for one country may not fit the needs of another country. Historical experiences have proven that constitutions drew up and dictated from the outside often do not work for that particular country. Some countries who tried to adopt another country’s constitution did not succeed.

Was the current Iraqi Constitution capable of stabilizing Iraq? Or to the contrary, was it the cause of more political and partisan rivalries, and the division of state functions to entrench sectarianism and regionalism and hence the spread of corruption and perhaps the spread of terrorism, which Iraq has suffered so much from?

The voices are rising in Iraq to demand a new constitution in which the current Iraqi Constitution, which was made by others, will be abandoned and replaced by a new constitution that will work for the Iraqi people because it will take into account what the people want.

Thus, it seems to us that the method of the Constituent Assembly and then the constitutional referendum means the true exercise of democracy, where the people exercise sovereignty themselves and participate in the exercise of constituent authority.

Resorting to the democratic method to develop a real constitution reflects the aspirations of the Syrian people and requires the care and real will to do that.  We can be sure that now the proposal would not appeal to the opposition, which knows for sure that it can not fight any election battle on the ground that does not represent anyone.

Nor will this proposition be accepted by the countries that are entangling themselves in the Syrian Constitution and will not be equally acceptable to Mr. “de Misttura” for those who want to choose them under the name of “experts” in the committee, a simple reason is that whoever will choose does not know the Syrian people or their wishes. People who live abroad do not know how much the Syrian people have suffered in recent years.

Most importantly, this proposal will not be accepted because the main objective is not to create a new constitution, nor strengthen democracy, but to make the state of booty that the stakeholders seek to share, or more precisely, to share what remains of them after all of this destruction and living with the mercenaries and some of the false freedom advocates.