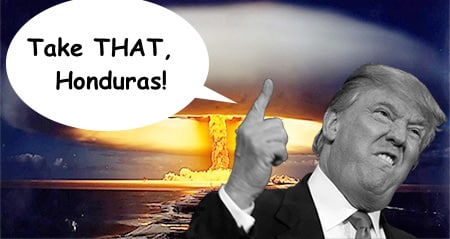 At 7:31:06 this morning, Base Aerea Soto Cano in Comayagua, Honduras was instantly incinerated by a B83 thermonuclear weapon set to its maximum yield of 1.2 megatons dropped by a USAF B1A Lancer as ordered by President Trump in his first official act of the day.

Trump then called a press conference and explained: “A short time ago, an American aeroplane dropped one bomb on Comayagua and destroyed its usefulness to the enemy. That bomb has more power than one million tons of TNT.

“The Hondurans began this war with their attempt to invade our country. They have been repaid many fold and the end is not yet.”

Trump said the nuclear bomb craters along the border would be filled with radioactive water and mutant crocodiles and used as a moat, alongside his planned Wall, to discourage illegal immigration.

Asked which Air Force Base supplied the BIA Lancer used to destroy Base Aerea Soto Cano, Trump deferred to National Security Advisor John Bolton. Bolton, after googling on his smart phone, explained that the nuclear armed bomber had been stationed at Base Aerea Soto Cano in Comayagua, Honduras.

Informed by reporters that he had just blown up an American military base, Trump blamed the media for the mistake, calling reporters “enemies of the people” before hastily exiting the press conference.

The newly-vaporized US Commander at Soto Cano, US Army Col. Winifred “Ashes” Ashton, could not be reached for comment .