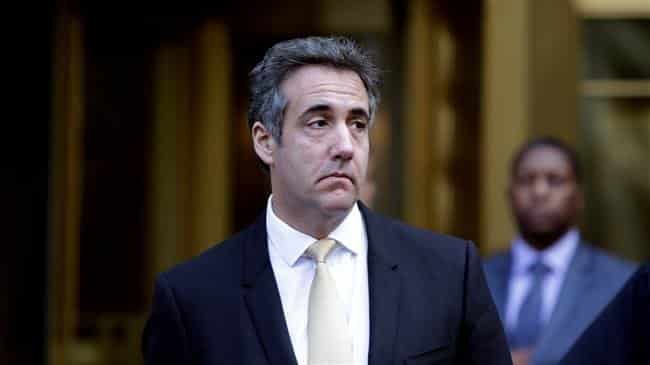 [ Editor’s Note: All this news below must be taken with a grain of salt, as Cohen never refused to take Trump’s money unless he underwent race-hating rehabilitation. While the money was rolling in and he was living the good life, it was no problem.

But the knives are out with just a few days left to the midterm elections, so we will see everything imaginable thrown on the wall to trigger any voter hot buttons. The Democrats of course want a record high minority turnout, when the historical trend has been the opposite.

And the other focus is the educated female Republican vote in the suburbs who are bailing out due to the party attitude that Trump’s views on women should not be viewed as a negative, but rather as “old news” or “his personal business”.

Trump’s wife, or the Republican party, should have bought him a blow-up doll, the deluxe model of course, to enjoy with his fast food burgers and tweeting. What a video that would make.

As for VT, Trump’s “quirks” have always been there for all to see. Our big concern is how little attention, even by the Republicans, has been paid to those who are running him.

And don’t forget, there is time for more false flags to manipulate a key voting block. That is the world we live in today… Jim W. Dean ]

The former lawyer and “fixer” of US President Donald Trump has claimed that he repeatedly used racist language before being elected to the White House.

Michael Cohen, a former Trump confidant, told the Vanity Fair magazine that the former celebrity businessman had once told him that “black people are too stupid to vote for him.”

Cohen’s claims come after Omarosa Manigault Newman, once the most prominent African American in the White House, published a blistering book in which she claimed Trump was a “racist” who repeatedly insulted blacks during the making of his reality TV show The Apprentice.

In the Vanity Fair interview, Cohen is quoted as saying: “I told Trump that the rally looked vanilla on television. Trump responded: ‘That’s because black people are too stupid to vote for me.’”

“[Trump] said to me, ‘Name one country run by a black person that’s not a shithole,’ and then he added, ‘Name one city,’” Cohen said.

Cohen’s claim echoes the president’s vulgarity earlier this year when he allegedly referred to Haiti and some African nations as “s**thole countries” during a January White House meeting on immigration.

Last month, Cohen re-registered himself as Democratic in an effort to distance “himself from the values of the current” Republican administration.

For more than a decade, Cohen was Trump’s personal lawyer, and was a key power player in the Trump Organization and a fixer in Trump’s political life.

After Trump’s election, Cohen served as the Republican Party’s deputy finance chairman but resigned that post this year amid a federal investigation into his business dealings.

The investigation, part of US Special Counsel Robert Mueller’s Russia probe, led him to plead guilty in August to eight counts of campaign finance violations, tax fraud, and bank fraud.

Mueller is probing whether the Trump election campaign in 2016 colluded with Russian efforts to damage his opponent, Hillary Clinton, and whether Trump has sought to illegally obstruct the investigation.

Cohen, 52, said at his court trial in August that Trump had directed him to arrange payments before the 2016 election to buy the silence of two women who alleged they had affairs with Trump.