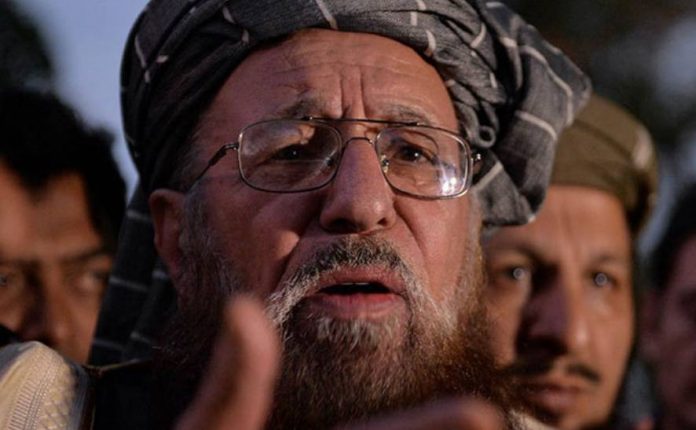 By Nauman Sadiq from VT

On Friday evening, Maulana Sami-ul-Haq was found dead in his Rawalpindi residence. The assassination was as gruesome as the murder of Jamal Khashoggi in the Saudi consulate in Istanbul. He was stabbed multiple times in chest, stomach and forehead.

Sami-ul-Haq was widely known as the “father of the Taliban” because he was a renowned religious cleric who used to administer a sprawling religious seminary, Darul Uloom Haqqania, in Akora Khattak in northwestern Pakistan. During the Soviet-Afghan War in the 1980s, the seminary was used for training and arming the Afghan so-called “Mujahideen” (freedom fighters), though it is now used exclusively for imparting religious education. Many of the well-known Taliban militant commanders received their education in his seminary.

In order to understand the motive of the assassination, we need to keep the backdrop in mind. On October 31, Pakistan’s Supreme Court acquitted a Christian woman, Aasiya Bibi, who was accused of blasphemy and had been languishing in prison since 2010. Pakistan’s religious political parties were holding street protests against her acquittal for the last three days and had paralyzed the whole country.

But as soon as the news of Sami-ul-Haq’s murder broke and the pictures of the bloodied corpse were released to the media, the religious parties reached an agreement with the government and called off the protests within few hours of the assassination.

Evidently, it was a shot across the bow by Pakistan’s security establishment to the religious right that brings to mind a scene from the epic movie Godfather, in which a horse’s head was put into a Hollywood director’s bed on Don Corleone’s orders that frightened the director out of his wits and he agreed to give a lead role in a movie to the Don’s protégé.

What further lends credence to the theory that Pakistan’s security establishment was behind the murder of Sami-ul-Haq is the fact that Mullah Abdul Ghani Baradar, a close associate of the Taliban’s founder Mullah Omar, was recently released [1] by Pakistan’s intelligence agencies and allowed to join his family in Afghanistan.

Baradar was captured in a joint US-Pakistan intelligence operation in the port city of Karachi in 2010. His release was a longstanding demand of the Afghan government because he is regarded as a comparatively moderate Taliban leader who could play a role in the peace process between the Afghan government and the Taliban.

Furthermore, Washington has been arm-twisting Islamabad through the Paris-based Financial Action Task Force (FATF) to do more to curtail the activities of the militants operating from its soil to destabilize the US-backed government in Afghanistan and to pressure the Taliban to initiate a peace process with the government. Under such circumstances, a religious cleric like Sami-ul-Haq, who was widely known as the “father of the Taliban,” becomes more of a liability than an asset.

It’s worth noting here that though far from being its diehard ideologue, Donald Trump has been affiliated with the infamous white supremacist ‘alt-right’ movement, which regards Islamic terrorism as an existential threat to America’s security. Trump’s tweets slamming Pakistan for playing a double game in Afghanistan and providing safe havens to the Afghan Taliban on its soil reveals his uncompromising and hawkish stance on terrorism.

Many political commentators in the Pakistani media misinterpreted Trump’s tweets as nothing more than a momentary tantrum of a fickle US president, who wants to pin the blame of Washington’s failures in Afghanistan on Pakistan. But along with tweets, the Trump administration also withheld a tranche of $255 million US assistance to Pakistan, which shows that it wasn’t just tweets but a carefully considered policy of the new US administration to persuade Pakistan to toe Washington’s line in Afghanistan.

Moreover, it would be pertinent to mention here that in a momentous decision in July 2017, the then prime minister of Pakistan Nawaz Sharif was disqualified from holding public office by the country’s Supreme Court on the flimsy pretext of holding an ‘Iqama’ (a work permit) for a Dubai-based company.

Although it is generally assumed the revelations in the Panama Papers, that Nawaz Sharif and his family members own offshore companies, led to the disqualification of the former prime minister, another critically important factor that contributed to the downfall of Nawaz Sharif is often overlooked.

In October 2016, one of Pakistan’s leading English language newspapers, Dawn News, published an exclusive report [2] dubbed as the ‘Dawn Leaks’ in Pakistan’s press. In the report titled ‘Act against militants or face international isolation,’ citing an advisor to the prime minister, Tariq Fatemi, who was fired from his job for disclosing the internal deliberations of a high-level meeting to the media, the author of the report Cyril Almeida contended that in a huddle of Pakistan’s civilian and military leadership, the civilian government had told the military’s top brass to withdraw its support from the militant outfits operating in Pakistan, specifically from the Haqqani network, Lashkar-e-Taiba and Jaish-e-Mohammad.

After losing tens of thousands of lives to terror attacks during the last decade, an across the board consensus has developed among Pakistan’s mainstream political forces that the policy of nurturing militants against regional adversaries has backfired on Pakistan and it risks facing international isolation due to belligerent policies of Pakistan’s security establishment. Not only Washington, but Pakistan’s ‘all-weather ally’ China, which plans to invest $62 billion in Pakistan via its China-Pakistan Economic Corridor (CPEC) projects, has also made its reservations public regarding Pakistan’s continued support to the aforementioned jihadist groups.

Thus, excluding a handful of far-right Islamist political parties that are funded by the Gulf’s petro-dollars and historically garner less than 10% votes of Pakistan’s electorate, all the civilian political forces are in favor of turning a new leaf in Pakistan’s checkered political history by endorsing the decision of an indiscriminate crackdown on militant outfits operating in Pakistan. But Pakistan’s security establishment jealously guards its traditional domain, the security and foreign policy of Pakistan, and still maintains a distinction between the so-called ‘good and bad’ Taliban.

Finally, after Trump’s outbursts against Pakistan, many willfully blind security and defense analysts suggested that Pakistan needed to intensify its diplomatic efforts to persuade the new US administration that Pakistan was sincere in its fight against terrorism. But diplomacy is not a pantomime in which one can persuade one’s interlocutors merely by hollow words without substantiating the words by tangible actions.

The double game played by Pakistan’s security agencies in Afghanistan and Kashmir to destabilize its regional adversaries is in plain sight for everybody to discern and feel indignant about. Therefore, Pakistan will have to withdraw its support from the Afghan Taliban and the Punjabi militant groups, if it is eager to maintain good working relations with the Trump administration and wants to avoid economic sanctions and international censure.