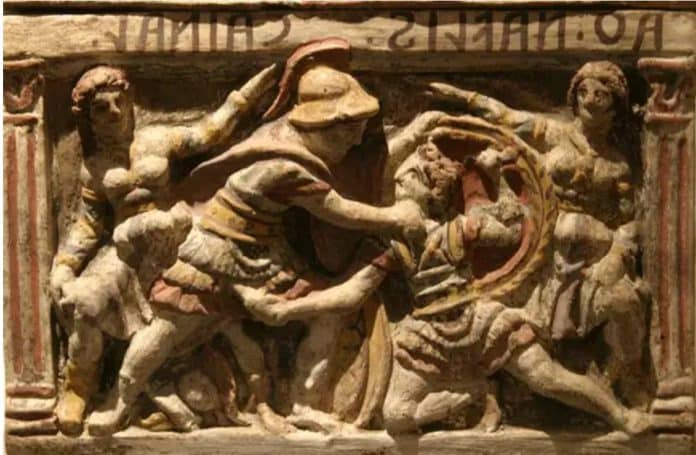 The Etruscans are an ancient and very little known civilizations. It is known that this is essentially the ancestors of the Romans. The Romans borrowed from the Etruscans architecture, various rites and technologies.

The Etruscan state was located between the Tiber and Arno rivers. During the reign of Emperor Claudius 1, in the 1st century AD, the entire history of Etruscan civilization was collected, but it burned down during the fire of the Alexandrian Library. The language of the Etruscans is still not deciphered. And the main question, where did this people go?

Genetic studies also left a lot of mysteries. It turned out that the Etruscans did not belong to any people of both Italy and Turkey. It was essentially a completely different nation. And apparently he disappeared instantly, leaving no genetic traces. And it speaks of some kind of disaster.

The scientist Joanna Mountain claims that the Etruscans had their own language, not belonging to the Indo-European group.

They tried not to mix with local peoples.

Some scientists draw parallels with the name of the people. Etruscans consonant with the word Russian.

Moreover, some scientists say they were able to decipher the language of Etruscans.

And the basis was taken Slavic languages.

Researcher V. Shcherbakov believes that the Etruscans wrote as it is heard. And if you take into account his method, the Etruscan words are very similar to the Slavic.

It is not known where it came from and where this people disappeared. But the fact that it was a very developed civilization, no doubt.

Probably, the Etruscans left the inhabited lands as a result of climate change, and maybe even a natural cataclysm. But he hopes for his jointing of their language, until he comes.

More on the topic:

The cows revealed the secret of the ancient civilization