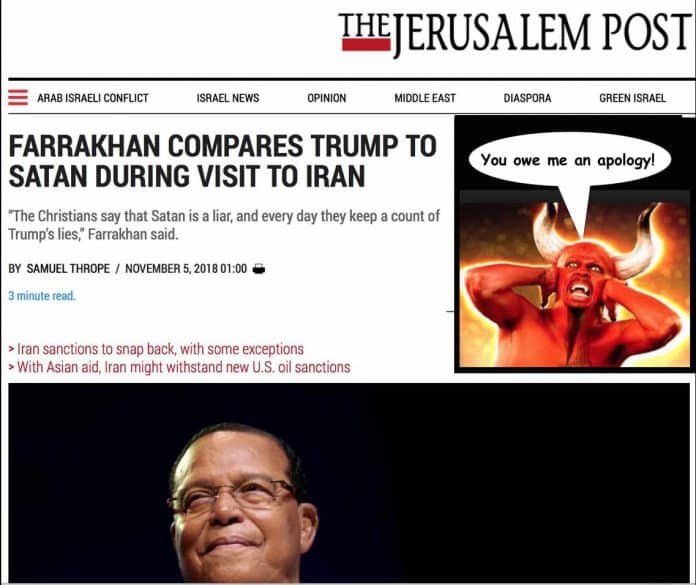 Responding to a report that Nation of Islam leader Louis Farrakhan had compared him to Donald Trump, Satan has issued an angry statement demanding an apology.

At a heavily-attended press conference (hell is full of journalists who are forced to attend press conferences for all eternity) the Prince of Evil inveighed against Farrakhan for making an unfair and hurtful comparison.

“I am the world’s greatest liar,” the Devil sneered. “Just because Trump lies all the time, he’s like me? Give me a break! Trump is the world’s second worst liar, almost as bad as his buddy Bin Salman. He couldn’t tell a plausible lie to save his soul!”

Satan argued that Trump failed to live up to the comparison on several other counts. “As the Rolling Stones so eloquently sang, ‘I’m a man of wealth and taste.’ Trump has one hell of a lot less wealth than he claims. And taste?! That stubby-fingered vulgarian wouldn’t know taste in art, literature, food, music, clothing or anything else if it snuck up and bit him on his big, fat ass! He just lolls around on the sofa watching Fox News and eating ersatz McDonalds quarter pounders with oreos, potato chips, pretzels and washing it all down with diet soda. Someone who travels with POTUS reports that ‘On Trump Force One there are four major food groups: McDonald’s, Kentucky Fried Chicken, pizza, and Diet Coke.’ Does that sound like a menu fit for the Prince of This World?”

Satan added that he had several hundred IQ points on Trump: “Me, I am nothing if not diabolically clever! I shouted out ‘Who killed the Kennedys?’ when after all it was you and me. But they never caught us, did they? Whereas that idiot Trump couldn’t even help Bin Salman come up with anything better than ‘Khashoggi died in a fistfight with 15 hit men.’ I cannot express the shame and humiliation I feel at being compared to such a dimwit.”

Satan then added that he did agree with Trump about one thing: It is time for the media to stop demonizing the 45th President of the United States. “I am sick and tired of the nonstop demonization of Trump,” Satan shouted. “Such an insult to demons!” Satan explained that he is helping launch a new GoFundMe page to raise money for a class action lawsuit against the media on behalf of demons everywhere, whose reputations are being sullied by the media endlessly and spuriously associating them with Donald Trump.

The Honorable Minister Farrakhan, who has had innumerable confrontations with Satan over the years, initially refused to back down. “I still say Trump and the devil have a lot in common,” he insisted, before finally admitting that this time the devil might have a point.