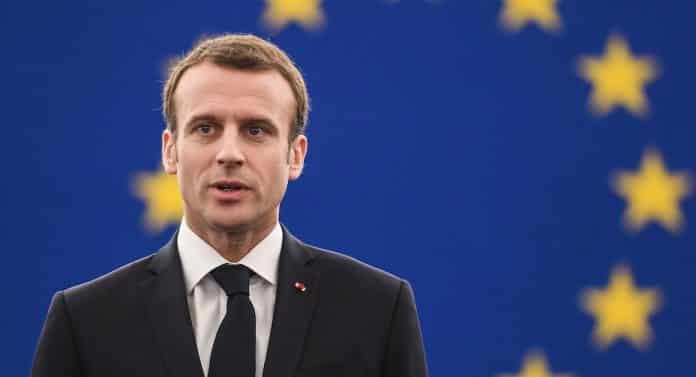 [ Editor’s Note: Macron’s call for a European Army is not unexpected, as a result of Trump’s unilateral INF withdrawal. The PressTV article mentions what the real fight is about, which country gets the majority of the defense arms contracting, which is the main reason for keeping war simmering on the front burner.

Macron’s Russia bogeyman ploy is even sillier. The bad result of an INF failure would be to turn Europe into a parking lot, but where Russian would lose a key market for gas sales in the process. Businessmen have always been hesitant to kill all of their customers. Dear Mr. Macron, an army is not going to save you in a nuclear exchange.

Always missing in these “reaction” policy statements is any real statesmanship. There is not a word about the need to create new treaties with reliable monitoring and enforceable provisions.

Rather than serve the long term interests of the people through intensive war deescalation diplomacy to shift war production over to civilian economy needs, national leaders write that off as a dream, giving up the ghost as to whose interests those national leaders really serve.

The public has been lapping up this slow motion train wreck, as it does most others, and can only partially claim to be victims. But it is still on solid ground over old-fashioned political corruption, including having so many pledging allegiance to Israel while pretending to serve us.

A European army, the only feasible one, would have to be mainly a huge reserve to be affordable, theoretically. And by that I mean, even if it was part time, maintaining up-to-date training within the diverse make up of the EU, plus the ever changing technical weapons part of it, seems impossible to me.

Britain can’t even keep its ships in operational order, equipment-wise or with staffing, yet wants to present itself as a world military power, which is a bad joke when more of its citizens are falling into poverty every day, indicating the ultimate failure of a government.

Go ask the Romans, who toward the end saw citizens offering themselves into slavery just to have someone take care of them, and not have to pay taxes… Jim W. Dean ]

French President Emmanuel Macron has called for the establishment of a “real European army,” claiming that Europe has been the chief victim of a recent US decision to scrap a major nuclear arms pact with Russia.

“We will not be able to protect Europeans if we don’t decide to have a real European army,” Macron said in an interview with Europe 1 radio on Monday.

He said Europe had to defend itself in a “more sovereign way” and without depending “only on the United States.”

PressTV-Trump to bring back nuclear race with Russia

The US president declares plans to abandon a key arms control treaty with Russia.

The INF, which was signed in 1986 between then-US President Ronald Reagan and Soviet Union President Mikhail Gorbachev, allowed the US to counter Chinese moves to build up arms in the Pacific but prevented Washington from deploying new nuclear armaments in response.

‘Protection even from the United States’

Macron called for “protection from China, Russia, and even from the United States of America,” implying that Trump’s recent decision to withdraw the US from the INF Treaty would put European security at risk from the US side, too.

“Who is going to be the main victim [of Trump’s decision to leave the INF]? Europe and its security,” Macron underlined.

The EU has for years pressed for efforts to strengthen its own defense capabilities through defense spending increases, among other measures. Earlier this year, the European Commission announced that the bloc’s 2019 budget stipulated the allocation of 245 million euros (287 million dollars) for the European Defense Industrial Development Program.

[Note: 245 million euros is a joke. It would have to be ten times that amount to be a serious effort…JD ]

This is while the US has also been exerting pressure on EU governments, including France, to equip their armed forces with American-built military hardware. Paris, however, is resisting such pressure, as the French industrial and defense industries remain strong.

Also in August, the French president said that he would announce new proposals for the EU to boost its security, calling on the 28-member bloc to stop relying on the US to protect its sovereignty.

The development comes as a major trade dispute between the US and its European allies has escalated since March, when Washington imposed a 25-percent tariff on steel imports and a 10-percent tariff on aluminum imports from EU member nations.