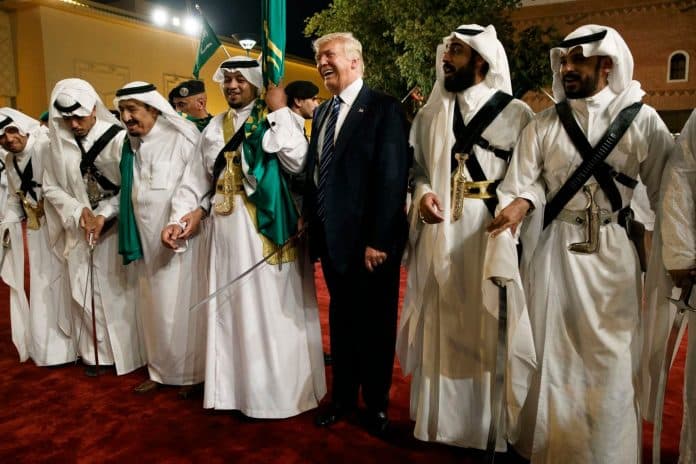 The major media outlets had totally ignored the important three days October 26-28 IISS Manama Dialogue 2018 conference that was organized by International Institute for Strategic Studies (IISS) in the city of Manama; the capital of the tiny island of Bahrain.

The speeches of these representatives were characterized mainly as Iran bashing and condemnations, particularly the speeches of the American representatives; Mattis and McGurk, and the Bahraini and Saudi ministers. While their governments are pursuing hegemonic policies within the region, they accuse Iran of pursuing a hegemonic Iranian Crescent, previously called Shi’ite Crescent, covering Lebanon, Syria and Yemen. Iran did not impose itself on these countries.

While the USA and the Gulf States have enlisted, trained and armed all the terrorist groups that have been destroying Syria and Yemen during the last decade, they accused Iran of a terrorist supporting state. The facts on the ground show clearly that Iran has been fighting and defeating terrorist groups and protecting Syrian cities first and eventually the whole region.

While the USA and the Gulf States are spreading sectarianism, encourage terrorism, seeking to dominate other countries, waging wars and seeking to destabilize the Middle Eastern region, they accuse Iran of such crimes.

Iran has never started any war or sent its military forces out of its own borders for the last 400 years.

While the American administration is gradually turning into a police state, and the Bahraini and Saudi kingdoms are despotic beheading dictatorships they accuse democratic Iran of abusing and suppressing its own people. Since its 1979 revolution Iran had held several democratic elections, something that had never happened in neither Bahrain nor Saudi Arabia.

None of these representatives dared to point to the core issue driving all these wars and destruction in the region except the Omani Minister; Yousef bin Alawi, who stated the following:

“We consider that the Palestinian issue is the core of all the problems that we have seen during the second half of the last century and the 18 years of the 21st Century … the state of Palestine needs to be established, because it has become a strategic necessity”

This Manama Dialogue came as a preliminary foundation for the planned for summit in November of the six leaders of the GCC; Gulf Cooperation Council (Oman, UAE, Saudi Arabia, Qatar, Bahrain and Kuwait) plus Jordan and Egypt in Washington with President Trump to lay the foundation for what Trump had called Middle Eastern Strategic Alliance (MESA) also dubbed Arab NATO-like Alliance.

Forming military alliances between Arab states to protect the Middle Eastern region goes back to post WWI era. The Arab League, formally known as the League of Arab States, was formed in 1945 with six-member Arab states and later expanded to include 22 states.

The League was rendered ineffective first by British and then by American interfering policies and banking systems especially after the League’s opposition to the establishment of the illegal Zionist state of Israel on occupied Palestinian land. Such policies had also foiled any inter-Arab military alliances such as those attempted by former Egyptian president Gamal Abdel Nasser.

Nasser’s pan-Arabism ideology was very popular in the 1950’s. It led to the formation of the 1957 Regional Defense Pact between Egypt, Saudi Arabia, Syria and Jordan.

Nasser’s pan-Arabism was viewed by the US as a threat to Israel, and when Nasser nationalized all British and French assets in Egypt, President Eisenhower’s administration decided to do everything it can to isolate Nasser and his ideology by transforming King Saud as a counterweight. Nasser was portrayed as a threat first to Jordanian King Hussein, and later a threat to King Saud. Eventually the Regional Defense Pact was dissolved.

In mid-1957 when Turkish troops were amassed on the Syrian border threatening to topple the government, Nasser sent a contingent force to aid Syria. In February 1958 Egypt and Syria were united into United Arab Republic (UAR). Later Yemen joined the UAR, and a loose federation was formed under the name of United Arab States.

With tacit Eisenhower’s encouragement king Saud planned to assassinate Nasser while in Syria, but the assassination failed and was exposed by Nasser in a public speech. King Saud then was replaced by his brother; King Faisal, who advocated pan-Islamic unity with non-Arab Moslem countries to counter Nasser’s pan-Arabism.

In September 1961 a Syrian army unit launched a coup in Damascus declaring Syria’s withdrawal from the UAR. Avoiding inter-Arab fighting Nasser refused to send Egyptian forces to Syria to reinforce the allies, and accepted the separation.

Saudi Arabian money provoked civil war in Yemen in 1962. This war drew Egyptian forces in a war of attrition that ended in 1967 when Nasser withdrew his forces leaving Yemen divided into North and South.

With the death of Nasser in September 1970, the ideology of pan-Arabism and United Arab States faded gradually since none of the Arab leaders, except Syrian Hafez al-Assad, had called for it but found no positive response. It was left to the inefficient non-unitarian and divisive Arab League to deal with regional security issues.

It must be said that since WWI the western powers; US, British and France, had planned to divide the Arab World into weaker states that could be controlled and manipulated through pro-western despots in order to blunder its resources, particularly oil, and to control its geostrategic location. The Zionist Greater Israel Project had been adopted and implemented for this purpose. Any Arab attempt to unite militarily was opposed and spoiled.

Yet, at the present, Trump’s administration is in the process of forming a military Middle Eastern Strategic Alliance (MESA) allegedly to protect the region from any military threat. MESA is just a new form of the old western designed Middle Eastern Alliance projects; whose real goals were to wage American proxy inter-Arab wars to further divide and weaken Arab states to safeguard Israel and to rake great financial profits for the American military industrial complex.

We had witnessed these military alliances in the 1980-1988 Iraq/Iran war where the Gulf States supported Iraqi Saddam Hussein. Then the same Gulf States allied with Egypt, Jordan and Syria to join the western coalition in the two Gulf Wars; 1991 and 2003, against Iraq.

In 2011 the Gulf States of Qatar, Saudi Arabia, UAE, Jordan and Turkey joined the so-called American Coalition to defeat ISIS in Syria when the facts on the ground showed that such coalition was a terrorist supporting coalition providing training, finance and weapons to ISIS to destroy Syria. In 2014 this same coalition supported terrorists who destroyed Libya. In 2015 we witnessed Saudi/UAE coalition, supported by Israel and US, waging war against Yemen.

So far, all these alliances had led to the destruction of Arab states. The proposed MESA is no different. Its major goal is to finish what the terrorist groups had started; destroying Syria, destroying Hezbollah and weakening or affecting a regime change in Iran. MESA, though, has one important distinction from its previous alliances, namely Israel.

As we have seen in the past, the American administrations will not allow the formation of an Arab military alliance that would threaten Israel. MESA will actually include Israel in the alliance as intelligent gathering partner. This would allow Israel to infiltrate its Arab partners’ military, security and intelligence systems. Israel is already involved in the terrorist war against Syria and in the Saudi/Emirati war against Yemen. MESA is perceived to include nine states; the six Gulf States (Kuwait, Bahrain, Qatar, Saudi Arabia, UAE and Oman), Jordan, Egypt and Israel.

The Arab’s enmity towards Zionist Israel, who occupied Palestine, attacked neighboring Arab states, and supported terrorist groups in Syria, would be turned into a friendly alliance, while Iran, who shares same religious faith with Arab states, supports the Palestinian cause, and considers Israel a main threat to the region is turned into an Arab enemy.

Vital issues remain to be tackled for this alliance to succeed. Arab states have their own separate policies and conflicts. Qatar was branded as a terrorist supporting state due to its conflicting agenda with those of the Saudi Arabia/UAE/Bahrain/Egypt alliance. Turkey, annoyed by Saudi decision to assist the Kurds in Syria, moved to become a shield for Qatar against the Saudi alliance by building a military base in the peninsula.

To reconcile these inter-Arab conflicts the Secretary of State Mike Pompeo has been touring the Middle East offering incentives as well as inciting enmity against Iran at the same time.

There are other complicated issues to be solved before this alliance is formed. Issues such as finance, command, bases, cooperation between member states, and logistical arrangements. It is obvious that Saudi money will mainly finance the alliance. Saudi Arabia is the milking cow as described by President Trump. American military generals will assume command for sure, and will impose how member states would behave and contribute militarily.

Iran and the rest of the Arab states; Iraq, Syria, Lebanon and Palestine, perceive MESA as a pro-Zionist anti-Arab coalition, whose covert real goals are further division, destruction and weakening of the Arab World. This coalition is looked at as a political and financial Arab suicide succeeding only in milking billions of Saudi money to buy American weapons that will only rust in Saudi desert, and in accepting the Zionist occupation of Palestine, that will eventually expand to cover more Arab land.

If stronger and larger international “ … 79 members of coalition in 75 countries, plus NATO, the EU, Interpol and the Arab League” according to Brett McGurk, had failed to affect regime change in Syria for a period of seven years, and the armed to the teeth with the latest sophisticated weapons American/Israeli/Saudi/Emirati/ coalition had failed to defeat the impoverished state of Yemen during the last three years, how then, would conflict-ridden MESA can accomplish any real victory?

The Iranian Minister of Foreign Affairs; Mohammad Javad Zarif, suggested a more efficient mechanism for security in the Persian Gulf region rather than building military alliances that create more enmity. He proposed starting a modest confidence building measures leading to a non-aggression pact. He suggested creating “a regional dialogue forum” among all the littoral states of the Persian Gulf to build “a security networking, rather than security alliances” to create “a strong region as opposed to a strong man in the region, where small and large nations – even those with historical rivalries – contribute to stability”

“You cannot have security at the expense of the insecurity of your neighbor.” Zarif emphasized.