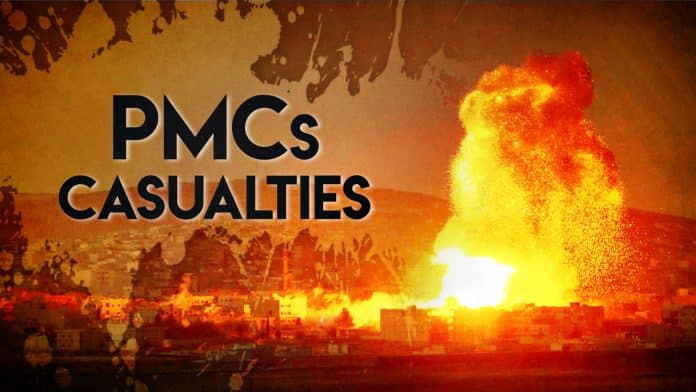 Initial speculations on this issue appeared on November 3 and November 4 when several outlets claimed that an explosion reportedly hit barracks of the 5th Assault Corps of the Syrian Arab Army (SAA) in the province of Deir Ezzor.

According to one of the versions, the blast allegedly hit “a Russian military HQ” near the Panorama checkpoint near Deir Ezzor city killing at least 5 Russian PMCs as well as killing and injuring multiple SAA troops. However, no photo or video evidence, or at least confirmation from a pro-government source, were provided. The argument used to “confirm” the alleged casualties was that the 5th Assault Corps is widely-known as a Russian-backed military formation, which has been assisted by Russian military advisers.

It should be noted that according to pro-government sources the blast in the area had been caused by a decision to eliminate ISIS-made IEDs removed from the liberated areas.

By November 5, this rumor had evolved and reached Russian media. Novaya Gazeta, a Russian opposition media outlet known for a CNN-style look at the conflict in Syria, claimed that 5 Russian PMCs and 6 SAA servicemen were killed in an explosion somewhere in Deir Ezzor province on November 4. Novaya Gazeta claimed that it had received info from its own “source” in Syria, but failed to provide details of the incident, at least location, and any evidence. The article also used the Russian backing of the 5th Assault Corps as an argument to confirm the alleged casualties among Russian PMCs.

The strange thing is that this rumor faced an uncritical reception in some major Russian media outlets, which just republished it citing Novaya Gazeta.

In fact, the newspaper just repeated rumors circulating in some Arab blogs and pro-militant media claiming that this data had been received from its “source in Syria” to make the article more “solid” in the eyes of the audience.

Unfortunately, over the past few years, it has become a common approach for major Western and Russian media outlets to spread wild speculations and staged lie hiding behind “anonymous sources”.

The aforementioned story is a fresh example how these rumors are being presented as reliable or even confirmed info because they serve somebody’s narrative.

Another well-known story in this field is the speculations about “hundreds” of casualties suffered by Russian PMCs or even Armed Forces as a result of US airstrikes in eastern Syria, which erupted in February 2018. These “hundreds” of killed Russian fighters have never been confirmed and only reliable data exists about some 5 Russian citizens, who died in unclear circumstances in the conflict zone this period.

However, this did not stop the media from repeating the fake story and even top US leadership like President Donald Trump and Secretary of State Mike Pompeo addressed it as a fact in their statements.