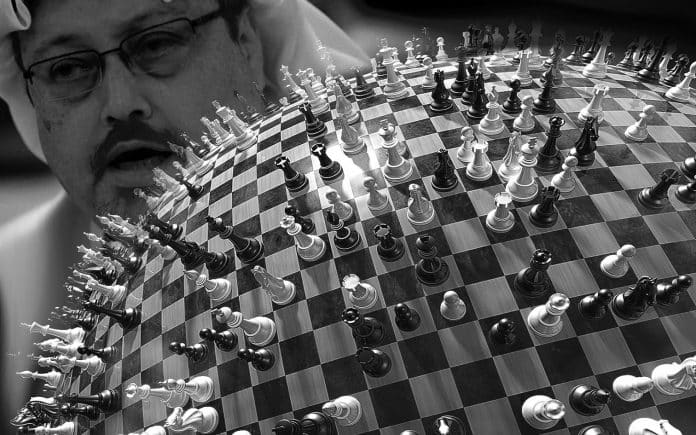 Now that we know Washington Post “journalist” Jamal Khashoggi has indeed been assassinated, and may now sleep with the fishes alongside his old family friend and confident Osama bin Laden, what are the odds that his gruesome death at the hands of a 15 man Saudi “hit-team” at approximately 1:17 P.M. on October 2, not only provides the pivot away from the post-World War II American world order – but advances the transition to a multipolar world?

Khashoggi’s assassination puts Saudi Arabia’s “de facto ruler” and “reformer” Prince Mohammed bin Salmon (MbS) in the glare of a harsh spotlight when he can least afford it. MbS’s war in Yemen is a source of growing world outrage.

His leadership is viewed as “toxic” by senior members of the royal family and his loyalties have been under suspicion by Western intelligence elites since his rise to deputy crown prince in 2015.

His abrupt arrest and imprisonment of eleven billionaire princes and dozens of officials connected to the Saudi ruling elite last year went down badly with the Western chattering class who’d been well served over the years by Saudi largesse.

Enslaving females, chopping heads or bombing school busses filled with children could be overlooked or even forgiven but cutting off those expensive nights at the London Ritz was another order of magnitude and they’ve been lying in wait for him ever since. What are the chances he’ll survive?

Call it the Khashoggi Gambit.

Odds are the CIA/MI6 will either organize a coup or push him into a deal with long-time Eurasian sleeping giants China and Russia. After all, a similar unresolved assassination in nearby Afghanistan nearly forty years ago in room 117 of the Kabul Hotel put U.S. forces directly into the Middle East, cemented an anti-Soviet U.S. – China military alliance ushered in the neoliberal world order and eventually the end of the first Cold War.

How coincidental could it be that another political sacrifice – with many of the same characteristics and much the same balance of power at stake – would parallel events of 40 years ago and set the stage for an era that now sees a new cold war and the roles of East and West permanently reversed?

The myth of the “moderate jihadist” that Khashoggi embodied as a member of the Muslim Brotherhood, brought the United States into Afghanistan in the 1970s and keeps American troops there today fulfilling America’s longest war. That mythology rests on the still cherished assumption that Western-hating radical Islamists will eventually evolve into “freedom loving” democratic/neoliberal free market capitalists if given the time, money and military muscle.

That self-serving mythology plays into the very heart of the neoliberal agenda that at once keeps the U.S. fighting a vague, endless war on multiple terrorist organizations like the Taliban or barely disguised al Qaeda-surrogates while simultaneously supporting them.

That this idiocy has already destroyed numerous secular Middle East states that were well on their way to modernity, and has since failed miserably in Afghanistan, Iraq, Libya and Syria should by now be self-evident, yet the empire’s need to rule everywhere at any cost rolls on. Don’t be fooled by the gushing “free world” democracy PR campaign.

Jamal Khashoggi, nephew of billionaire arms-dealer Adnan Khashoggi  was not evolving toward liberal democracy, conservative democracy or anything remotely having to do with a “free world”.

In the words of Alastair Crooke, “Khashoggi symbolized too, in a personal way, that ambiguous tentacle stretching between [Osama] bin Laden’s Al-Qaed’da and the Muslim Brotherhood”.  Despite his friendly, smiling face wearing an – oh so American – baseball cap on the opinion pages of the Washington Post, Jamal Khashoggi was a loyal propagandist for a brutal Saudi regime and an unreformed jihadist.

Prince Turki al-Faisal, former Saudi intelligence chief and ambassador to Washington even broke off a close relationship with Khashoggi, admonishing him for his blind adherence to the Brotherhood and its “cult” status “that has used terrorist actions to promote its views”.

That he found a home at the Washington Post speaks to his pedigree as a dedicated neoconservative. As Alastair Crooke points out, “Khashoggi is hailed in the West as a liberal, favoring democratic reform, but in fact he was a staunch supporter of the monarchical system (of which MbS is the effective head).

He contended however, that all these monarchies were ‘reformable’. Only the secular republics, he suggested (such as Iraq, Syria, and Libya) were unreformable, and required to be overthrown.”

Overthrowing secular regimes and replacing them with Muslim fanatics put Khashoggi squarely in the vanguard of Neoconservative foreign policy and his death at the hands of a Saudi death squad is a blow to their entire agenda.

But it should be remembered that their agenda gained prominence in the first place as a result of a not so dissimilar atrocity leveled against an American Ambassador in 1979. As the cracks in the foundation of that agenda rapidly spread and power shifts from West to East, the similarities between the Khashoggi killing and the run up to the anti-Soviet Afghan war of the 1970s may make the current fiasco seem more than just coincidence, but a roadmap to something much bigger.

Lots of parallels can be drawn between the Middle East crisis of late 1970s Washington and today’s crisis over Saudi Arabia. The Boston Globe’s Stephen Kinzer believes the U.S. is acting out the same mistakes today vis a vis MbS as the Carter administration did with the Shah during the Iran crisis: “It’s always dangerous just to believe what the leader of a country tells you…We’re doing the same thing in Saudi Arabia now that we did in Iran during the Shah period, which is just to ask the leader of the country to tell us what’s going on and then believe it. So I think we’re more out of touch now with what’s going on inside Saudi Arabia than we’ve ever been in modern history.”

But the circumstances surrounding what the Financial Times (FT) referred to as the “reckless” Mohammed bin Salman may even more closely resemble the role played in Afghanistan by the equally reckless Afghan reformer, Hafizullah Amin at the kickoff to neoliberal rule back in 1979.

Thanks largely to the machinations of President Jimmy Carter’s National Security Advisor, Zbigniew Brzezinski; Amin’s Marxist government had come under attack from the U.S., China and Saudi Arabia almost immediately after assuming power in a bloody coup in 1978. Brzezinski’s plan to infiltrate and undermine Soviet control of its southern Muslim provinces dovetailed with the Saudi Kingdom’s ongoing operations to spread its version of radical Wahhabist Islam into Central Asia.

Brzezinski and the Saudis shared a special off the books intelligence operation known as the Safari Club to spread disruption, subterfuge and assassinations in Afghanistan. The Safari club represented the true essence of the CIA ethos; an autonomous covert action organization with global reach, beyond the jurisdiction of American oversight.

But Amin was also a thorn in Moscow’s side and murderous opportunist in his own right. Moscow considered Amin to be a petite bourgeois and not a Marxist, not to mention a CIA asset.

Much to Moscow’s displeasure, his radical social reforms antagonized the rural population and played directly into the hands of the Saudi-backed Jihadists. The Soviets wanted him to go slow, but Brzezinski and the Saudis didn’t want him at all. As he struggled to establish control a new U.S. Ambassador – Adolph “Spike” Dubs – was sent to neutralize Soviet anxiety and establish a rapport.

Seven months later Dubs was kidnapped and killed in what has been described as a “botched rescue attempt” but was in fact an assassination. Amin accepted responsibility for the death but made secret overtures to Washington which went unanswered.

Nine months later the Soviet Union invaded, executed Amin and “Russia’s Vietnam” was off and running. The kidnapping and assassination of Ambassador Adolph Dubs ended any meaningful diplomatic effort by the U.S. to prevent a Soviet invasion of Afghanistan. The death was employed however from that day forward by President Carter’s National Security Advisor Zbigniew Brzezinski as the opportunity to increase the level of provocation for luring the Soviets into their own “Vietnam quagmire”.

Now the shoe is on the other foot. Will the Khashoggi death prove to be the inevitable turning point for a final U.S. mistake in the Middle East, the way the Dubs death made inevitable the Soviet blunder in Afghanistan?

Will the United States repeat the Soviets’ history and fall into the trap?

The Khashoggi Gambit is rapidly playing out and heads have already rolled. The world won’t have long to wait, but will suffer the consequences of America’s lack of leadership no matter what the outcome.

Paul Fitzgerald and Elizabeth Gould are the authors of Invisible History: Afghanistan’s Untold Story, Crossing Zero The AfPak War at the Turning Point of American Empire and The Voice. Visit their websites at invisiblehistory and grailwerk.com