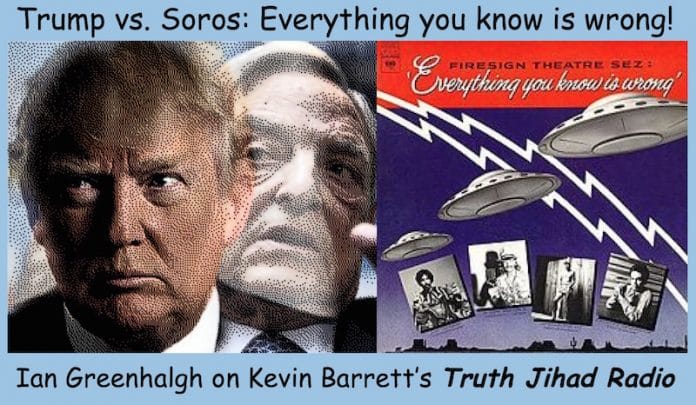 Hey Trump fans! Before you vote or cheer for for Republicans in the midterms, do some homework on the respective careers of Donald Trump and George Soros. Yes, one of them isworking for the, er, “elders of Zion”…but which one?

Veterans Today editor Ian Greenhalgh argues (and I don’t think he’s entirely wrong) that everything “they” accuse Soros of doing is precisely what “they” themselves ARE doing! In other words, the anti-Soros propaganda machine is owned and operated by the criminal associates of a certain Benyamin “Bibi” Netanyahu…i.e. the people who did 9/11. And Trump has been fronting for that criminal cartel throughout his career, never more so than since he assumed the Oval Office.

Does that mean Soros is an angel? Of course not. He’s a Russophobic currency manipulator who supports various kinds of political mischief as well as idealistic causes that resonate with his “open society” philosophy. In short, a mixed bag.

But the Trump-Kushner-Netanyahu group, including their “Russian” mob associates/bosses, is pure evil. THEY (not Soros) are the ones pushing for a global (Zionist) dictatorship.

Put THAT in your pipe and smoke it, Alex Jones!

In this interview we discuss Soros’s history, as well the history of the Khazarian Mafia (or “Russian mafiya“) whose historical headquarters was Odessa, but which is now almost synonymous with the occupation of Palestine.