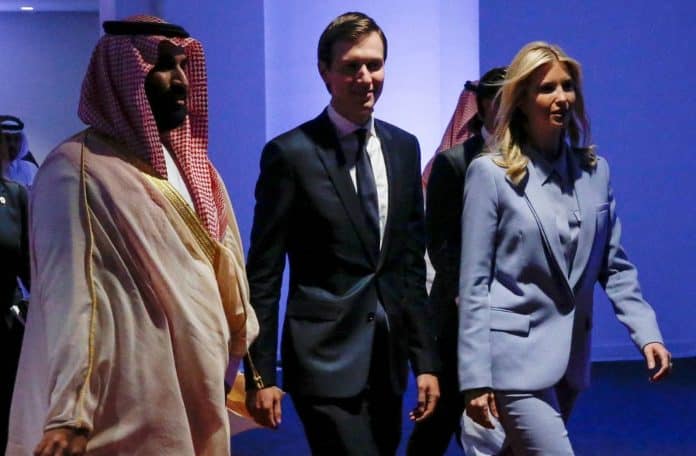 A question would naturally arise in the minds of astute readers of alternative media that why did the mainstream media, Washington Post and New York Times in particular, take the lead in publicizing the murder of the Saudi dissident Jamal Khashoggi at the Saudi consulate in Istanbul on October 2?

One apparent reason could be that Khashoggi was an opinion columnist at The Washington Post, which is owned by Jeff Bezos, the owner of Amazon. Washington Post has a history of working in close collaboration with the CIA because Bezos had won a $600 million contract [1] in 2013 to host the CIA’s database on the Amazon’s web-hosting service.

It’s worth noting here that despite the Saudi Crown Prince Mohammad bin Salman being primarily responsible for the war in Yemen that has claimed tens of thousands of lives and has created a famine in Yemen, the mainstream media hailed him as a “liberal savior” who had brought radical reforms in the conservative Saudi society by permitting women to drive and by allowing cinemas to screen the Hollywood movies.

So what prompted the sudden change of heart in the mainstream media that the purported “moderate reformer” was all of a sudden vilified as a brutal murderer? It could be the nature of the brutal assassination as Khashoggi’s body was barbarically dismembered and dissolved in acid, according to the Turkish sources.

More significantly, however, it was the timing of the assassination and the political mileage that could be gained from Khashoggi’s murder in the domestic politics of the US. Khashoggi was murdered on October 2, when the US midterm elections were only a few weeks away. Donald Trump and his son-in-law Jared Kushner in particular have known to have forged close business relations with the Saudi royal family. It doesn’t come as a surprise that Donald Trump chose Saudi Arabia and Israel for his first official visit in May last year.

Thus, the neoliberal media’s campaign to seek justice for the murder of Jamal Khashoggi was actually a smear campaign against Donald Trump and his conservative political base, which is now obvious after the US midterm election results have poured in. Even though the Republicans have retained their 51-seat majority in the Senate, the Democrats now control the House of Representatives by gaining more than 30 additional seats.

Regarding the nature of the steadfast alliance between Washington and Riyadh, it bears mentioning that in April 2016 the Saudi foreign minister threatened [2] that the Saudi kingdom would sell up to $750 billion in treasury securities and other assets if the US Congress passed a bill that would allow Americans to sue the Saudi government in the United States courts for its role in the September 11, 2001 terror attack. (Though the bill was eventually passed, the Saudi authorities have not been held accountable; even though 15 out of 19 9/11 hijackers were Saudi nationals.)

Additionally, regarding the Western defense production industry’s sales of arms to the Gulf Arab States, a report [3] authored by William Hartung of the US-based Center for International Policy found that the Obama administration had offered Saudi Arabia more than $115 billion in weapons, military equipment and training during its eight-year tenure.

Similarly, the top items in Trump’s agenda for his maiden visit to Saudi Arabia in May last year were: firstly, he threw his weight behind the idea of the Saudi-led “Arab NATO” to counter Iran’s influence in the region; and secondly, he announced an unprecedented arms package for Saudi Arabia. The package included between $98 billion and $128 billion in arms sales, and over a period of 10 years, total sales could reach $350 billion.

Therefore, keeping the economic dependence of the Western countries on the Gulf Arab States in mind during the times of global recession when most of manufacturing has been outsourced to China, it is not surprising that when the late King Abdullah of Saudi Arabia decided to provide training and arms to the Islamic jihadists in the border regions of Turkey and Jordan against the government of Bashar al-Assad in Syria, the Obama administration was left with no other choice but to toe the destructive policy of its regional Middle Eastern allies, despite the sectarian nature of the proxy war and its attendant consequences of breeding a new generation of Islamic jihadists who would become a long-term security risk not only to the Middle East but to the Western countries, as well.

Similarly, when King Abdullah’s successor, King Salman, decided on the whim of the Crown Prince Mohammad bin Salman to invade Yemen in March 2015, once again the Obama administration had to yield to the dictates of Saudi Arabia and UAE by fully coordinating the Gulf-led military campaign in Yemen not only by providing intelligence, planning and logistical support but also by selling billions of dollars’ worth of arms and ammunition to the Gulf Arab States during the conflict.

In this reciprocal relationship, the US provides security to the ruling families of the Gulf Arab states by providing weapons and troops; and in return, the Gulf’s petro-sheikhs contribute substantial investments to the tune of trillions of dollars to the Western economies.

After the brutal murder of Jamal Khashoggi and the publicity it got in the mainstream media, some starry-eyed dreamers are wondering is there a way for Washington to enforce economic sanctions against Saudi Arabia? As in the case of Iran nuclear sanctions from 2006 to 2015, sanctioning the Gulf states also seems plausible; however, there is a caveat: Iran is only a single oil-rich state which has 160 billion barrels of proven oil reserves and has the capacity to produce 5 million barrels per day (mbpd) of crude oil.

On the other hand, the Persian Gulf’s petro-monarchies are actually four oil-rich states: Saudi Arabia, UAE, Qatar and Kuwait. Together, their share amounts to 466 billion barrels, almost one-third of the world’s 1477 billion barrels of total proven oil reserves.

Therefore, though enforcing economic sanctions on the Gulf states sounds like a good idea on paper, the relationship between the Gulf’s petro-monarchies and the industrialized world is a consumer-supplier relationship. The Gulf states are the suppliers of energy and the industrialized world is its consumer, hence the Western powers cannot sanction their energy suppliers and largest investors.

If anything, the Gulf’s petro-monarchies have “sanctioned” the Western powers in the past by imposing the oil embargo in 1973 after the Arab-Israel war. The 1973 Arab oil embargo against the West lasted only for a short span of six months, during which the price of oil quadrupled, but Washington became so paranoid after the embargo that it put in place a ban on the export of crude oil outside the US borders and began keeping 60-day stock of reserve fuel for strategic and military needs.

Jeff Bezos Is Doing Huge Business with the CIA, While Keeping His Washington Post Readers in the Dark: