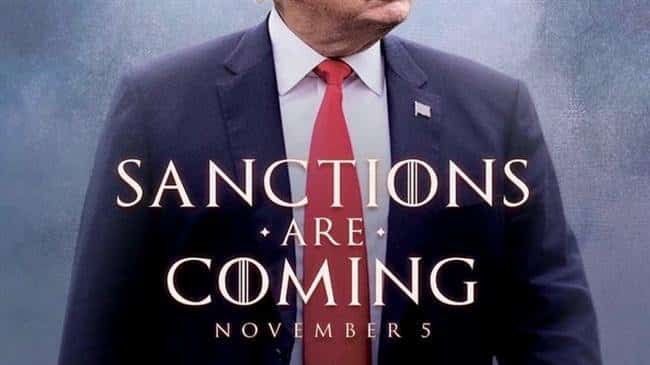 [ Editor’s Note: This is the first EU experts’ weigh in on the effect of the US-Iran sanctions, the reasons why, and they make a lot of sense.

These are not “Iran lovers” that have been hunted down for hit comments, but professionals calling the situation as they see it. Iran had led with this theme, on the simple grounds that it has survived worse in the past.

But the difference now is Iran’s sustaining a defensive military build up in the face of US, Israeli and Saudi aggression. For example, it has already begun manufacturing its first fighter planes.

The big question is how far will Trump and the NeoCons push secondary sanctions on those doing business with Iran? The EU has committed to doing so, even Britain. So how much pain is Washington really willing to inflict on them, and what will be their response?

Will the US Treasury Department focus on hurting the companies, and thus create political heat on the respective governments? And if the US really “nuts out” on the EU with sanctions, will that have any effect on NATO and US basing rights?

Will others feel they can follow suit with Trump and break any agreements they want? And what happens if Europeans start demonstrating in the streets against the US, throwing eggs and tomatoes at US Embassies?

Pompeo just said Iranian leaders have to bow down if they want their people to eat – quite an admission that the sanctions are aimed at the people to stimulate regime change, a silly NeoCon dream, as it just makes Iranians hate the US more.

If EU companies are financially hurt by US-Iran sanctions, then would their respective governments start freezing US assets in compensation? How far will the game of showdown go? Right now, nobody really knows, including Trump… Jim W. Dean ]

The impacts of fresh US sanctions on Iran have been cushioned by high oil prices and Washington’s international isolation, with Tehran being better placed to weather the storm, a Reuters analysis says.

Citing officials and analysts, the news agency said while the US sanctions will probably trigger recession in Iran next year, they will not lead to an economic meltdown.

US President Donald Trump on Monday decided to trumpet sanctions on Iran not with a speech, but a Twitter meme in reference to Game of Thrones, “Sanctions are coming.”

“Iran’s situation is better than pre-2016 because of high oil prices and the fact that the US is isolated this time,” the report by Reuters quoted a European diplomat as saying.

The diplomat’s comments echo the official stance of the Iranian government, which says the recent rise in oil prices has offset the impact of US sanctions on Iran’s oil exports.

“Trump thought he could shrink our country’s oil revenues by imposing sanctions on Iran’s oil and cutting its exports, but the rise in oil prices did not let that happen,” Mohammad Baqer Nobakht, the head of Iran’s Planning and Budget Organization, said last month.

The US has also granted waivers to almost all key clients of Iran’s crude oil for fear of further hikes in oil prices. The countries exempted from the US sanctions on Iran’s oil exports include China, India, Greece, Italy, Taiwan, Japan, Turkey and South Korea, which together took in over 80 percent of Iran’s oil exports last year.

However, Iran says the waivers are not enough to keep the oil price down, and oil consumers are set for “painful months” ahead because of insufficient supplies.

Meanwhile, as the European diplomat told Reuters, the US isolation under President Donald Trump would also reduce the impact of its unilateral sanctions on the Islamic Republic.

The previous sanctions on Iran, imposed by Trump’s predecessor Barack Obama, were supported by the UN Security Council and the European Union. However, this time the US is alone, and the entire world, except for a few countries, have vowed to maintain business with Iran.

“It will be a difficult period but Iran’s economy will withstand it for various reasons,” a second diplomat told Reuters, “including (the fact of) Russia being under (US and EU) sanctions, Saudi Arabia having its own financial and political issues, and (trade war) between China and the United States.”

The report also quoted a Fitch solutions analyst as saying that the new sanctions would not lead to the collapse of the Iranian economy, as the country would be able to keep exporting a significant volume of its crude oil.

“Tehran is still likely to see a substantial share of its foreign exchange earnings maintained,” Andrine Skjelland told Reuters. “This will enable Tehran to continue subsidizing imports of selected basic goods, keeping the costs of these down and thus limiting inflation to some extent.”

The new round of US sanctions, which had been lifted under a multilateral 2015 nuclear accord with Iran, came back into force on Nov. 5, drawing criticisms from the United Nations as well as Washington’s allies in the European Union.

The bans – the second of their kind since Washington’s withdrawal from the deal in May — take aim at Iran’s banking, insurance and energy sectors, targeting more than 700 entities. The first round was reinstated in August.

The European Union, which coordinated the talks leading to the nuclear deal, is set to enact a financial mechanism to facilitate banking transactions with Iran.