He must be stopped.

Democrats won the House with a 40 million vote margin and the lost the Senate with a 12 million vote win.  The answer?  Voter suppression, gerrymandering, rigged counts and mob influence over our electoral process.

We know this, Mueller has enough to arrest Trump right now, not just theft and corruption but child trafficking as well.

We all agree, his bombing of Syria, his wild accusations against Iran, his misuse of authority to illegally break treaties, these are felonies, treason.

We ask the military to step in, take down Pence and Trump, put in a caretaker government, secure our borders from the real enemies, organized crime, lobbyists, Sheldon Adelson and his billionaire thugs and put an end to the system that has turned our constitution into a joke.

UK Guardian: The 2018 midterm elections brought significant gains for Democrats, who retook the House of Representatives and snatched several governorships from the grip of Republicans.

But some were left questioning why Democrats suffered a series of setbacks that prevented the party from picking up even more seats and, perhaps most consequentially, left the US Senate in Republican hands. 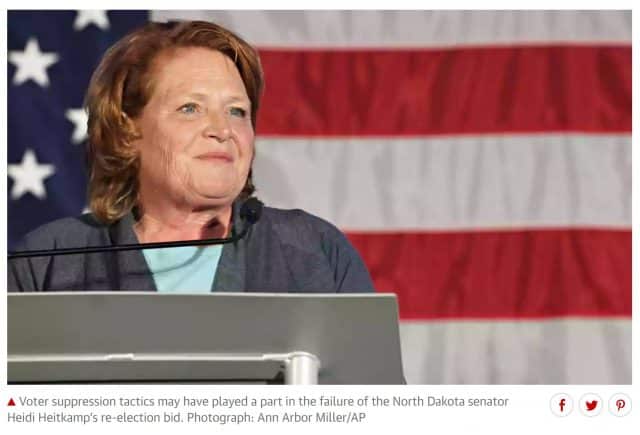 Among the most eye-catching was a statistic showing Democrats led Republicans by more than 12 million votes in Senate races, and yet still suffered losses on the night and failed to win a majority of seats in the chamber.

Constitutional experts said the discrepancy between votes cast and seats won was the result of misplaced ire that ignored the Senate electoral process.

Because each state gets two senators, irrespective of population, states such as Wyoming have as many seats as California, despite the latter having more than 60 times the population. The smaller states also tend to be the more rural, and rural areas traditionally favor Republicans.

This year, because Democrats were defending more seats, including California, they received more overall votes for the Senate than Republicans, but that does not translate to more seats.