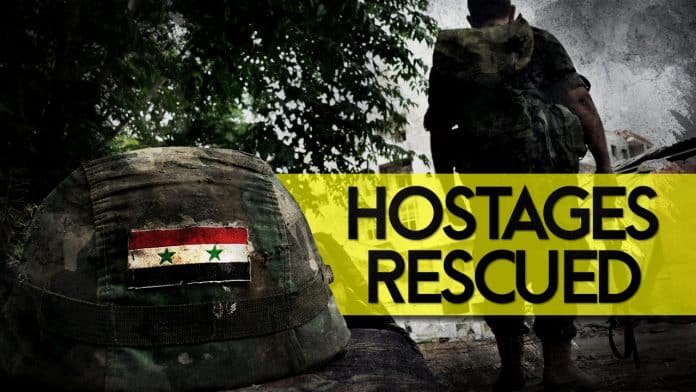 On November 8, the Syrian Special Forces freed all hostages, who had been captured by ISIS in eastern al-Suwayda and then held in eastern Homs, the Syrian state media reported. According to the report, the operation took place in the area of Hamimah east of Palmyra, where Syrian troops eliminated a group of ISIS terrorists and feed the hostages.

The SANA provided no further details. However, Syrian pro-government activists believe that Russia Special Forces may have played own role in the operation.

ISIS captured civilians in a brutal attack on the government-held area on July 25. Since then, the Damascus government had been struggling to rescue the hostages and even attempted to strike a deal on this issue with the terrorist group in October. However, only 6 civilians were saved this way. The military option appeared to be more effective.

Earlier this week, troops of the Russian Special Operations Forces reportedly arrived to the eastern part of al-Suwayda province in order to support the Syrian Army operation against ISIS in the al-Safa area. The arrival of the Russian troops

A day earlier, Syrian pro-government sources reported that the elite 4th Division had been redeployed from northwestern Syria to positions around al-Safa. Several heavy rocket launchers were also deployed near the ISIS-held area. A source in the Syrian Army told SouthFront that government troops are preparing to launch a new attack on ISIS in al-Safa in the nearest future.

Since late July, the army has carried out several attempts to eliminate the ISIS pocket in the area, but a part of the pocket has remained in ISIS hands. Now, when the hostages are freed and the Russian military advisers are deployed ISIS is in much more complicated situation.

On November 8, the US-led coalition repelled an ISIS attempt to attack its military garrison near the al-Tanak oil field in the province of Deir Ezzor, the Syrian Observatory for Human Rights reported. The coalition reportedly eliminated over 20 ISIS members and 7 vehicles.

Previously, the SDF recaptured a number of positions which it had lost to ISIS near the Hajin pocket in the Euphrates Valley. However, the situation in the area remains tense because the SDF is conducting no offensive operations against ISIS there now. The reason is Turkish strikes on SDF positions as well as Ankara’s threats to kick off a large-scale military operation against the Kurdish-dominated group in northern Syria.