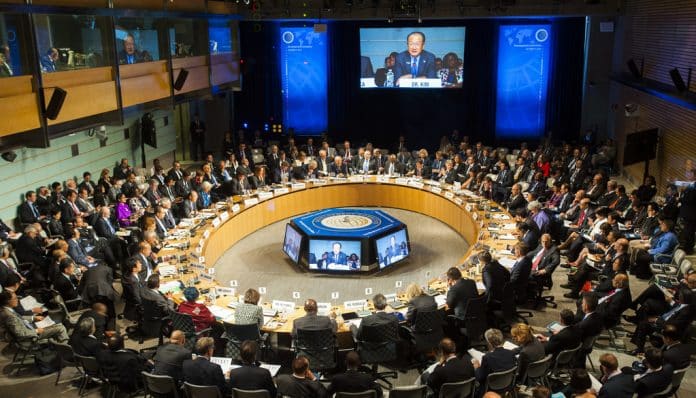 Humankind goes around in circles, what goes around, comes around. After three hundred thousand years of existence, should we not be doing better?

Just take a look at the world around you. A column of desperate people migrating northwards through Mexico is classified as an invasion force and thousands of troops are sent to greet them. Welcome to the USA. Shoot when you see the whites of their eyes, eh whatty what?

Some idiot in Brazil is hastily stitching together legislation to reverse the social gains made under Presidents Lula and Dilma, preparing to give the Amazon to Uncle Sam, whatever the consequences for the Native Americans.

13 Russians are accused of hijacking the entire US electoral system, as if thirteen people could outwit 300 million, or are Russians that far advanced of Americans, or are Americans really that stupid? The USA and UK get on a high horse because the Russian-speaking people of Crimea voted to return to Russia and amid claims of “invasion” (which it was not), say nothing about their own illegal invasion of Iraq and Libya, a country now destroyed and crawling with terrorists.

David Cameron allegedly writes a piece in a British newspaper claiming he is bored and wants to come back to front-line politics as Foreign Secretary. What, after what he did to Libya, after NATO targeted children and claimed they were legitimate targets, after NATO strafed the country’s electricity grid and water supply?

The fool who made some stupid promise to have a Brexit vote although he himself stated that people should vote to remain just to garner an absolute majority in an election and failed to foresee that his country would be split down the middle, that Scotland would vote to remain and failed to tag on to the referendum a minimum requirement addendum of some 65% or 70% one way or another?

And people like this get to be Prime Ministers and Presidents? As they did not so long ago when they invaded countries, drew lines on maps, slaughtered civilizations then after three hundred years left them with illiteracy rates of some 90 per cent. Or more.

The stories about a cigar-shaped alien spaceship hovering in space observing us and sending information back to Planet Zog are fake news. The reality must surely be that the spaceship is in fact a satellite sent by an alien TV comedy channel, providing a live freak show which is Homo sapiens on Planet Earth 2018. They say ratings have smashed previous records while half the Universe cracks up giggling at our expense.

Where is the common sense in governance?

So, where is the common sense in governance? How come we are once again looking at each other through the sights of a gun, how come people are not free to go to a shopping mall in the USA, or Brazil for that matter, without fearing for their lives? How come crime rates are sky-rocketing, how come large swathes of the planet are no-go areas, how come Sunni and Shia are at each others’ throats, how come it is dangerous to practise Christianity in many places, how come people are prepared to blow themselves up in public spaces to become martyrs for their religion?

How come nobody has made any inroads against drug use, how come arms are trafficked so freely, how come kids come out of school unprepared for the workplace, how come governments cannot provide full employment for their citizens?

Yet with all these problems, instead of pulling together and solving problems together, here we are again with the USA and its yapping chihuahuas making insolent remarks about Russia and threatening Iran (the next victim), imposing sanctions on the Russian economy (a blessing in disguise), here we are again with the British media describing Russia as a “hostile nation” in a propaganda coup without a shred of evidence. Back we are to “us and them”, the greater the notion of “them”, the more justifiable the “us”. Read “NATO”.

Humility and tolerance and bridge-building?

It all boils down to a complete and total misunderstanding of the fundamental, basic precept that societies develop in different ways, following various vectors which shape societal and economic development and so what is required is an approach based on humility, tolerance and the will to build bridges. This is, after all, the mainstay of the D-word, Diplomacy. And it is in two words, common sense.

Most societies today are based on hierarchical structures in which a ruling body manages the governance of a country to protect the interests of its society. The deal is based upon trust and competence.

In such societies one would be likely to find a more conservative approach to religion, where the congregation is served the service rather than creating it, along with a more conservative approach to politics, in which the system favors lists of candidates being drawn up by political formations, each one elected when a certain number of votes have been reached, but with the public voting for a political color rather than a personality.

In such systems, the political representation of various parties in Parliament/Congress will be more apparent (for example, parties out of the center area would be able to elect deputies/MPs/Congresspersons) and in such systems, the role of State-owned enterprises and the desire to work in a Corporation would tend to be more enhanced.

On the other hand, in a handful of countries, and this is a peculiarity of the minority Anglo-Saxonic group which claims to be the world policeman, we see an approach to religion more individualistic (with the translation of the Bible into the vernacular and the ensuing ability to reach God directly by by-passing the Priest), we see an enhanced degree of nationalism and nationalistic values, we see a political approach, again, based on the individual candidate who has a relationship with her/his constituents. And in the corporate world we see a focus on entrepreneurship. It is a society based on power of the individual rather than the group, in which the individual can empower her/himself by forming associations which are loosely-knit and flexible.

The Arrogance of the claim to righteousness

When this second society postures as the right one and the only one, and demands that the rest of the world should follow suit, it denotes a complete absence of respect for alternative systems and cultures, underlines a degree of prepotence which is frightening and exposes a hegemonistic and imperialistic attitude to geo-political management. In short, a clique of pariahs which do not belong in modern society.

When people begin to understand that it is OK to be different and that it is in the interests of all to adopt a multicultural approach, then perhaps someone sensible (probably a woman) somewhere can pull up a table and a few chairs for us all to talk, solve our collective problems, help each other out and see that spaceship move away because Homo sapiens has become unnewsworthy and downright boring. Success stories don’t make the news.

Food for thought? Nice weekend. This is the weekend of Saint Martin’s Day (November 11th). Martinius was the son of a Roman army officer who regarded his son’s leanings towards Christianity as un-Roman and decided to make a man out of him by sending him into the army. On a mission in Pannonia (now Hungary) he saw a beggar and because it was cold, cut his Roman cloak into two and gave half to the beggar. A symbol of sharing, repeated throughout Europe at this time of Saint Martin’s Summer (good weather in Autumn) by sharing of chestnuts and new wine.

Perhaps this is a good message for those who claim to rule the world to begin to turn a new leaf, start a new chapter and live up to everyone’s expectations. If they are incapable, move over…